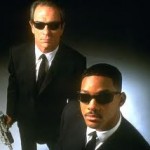 Deut. 27:28. The hidden things belong to the Lord our God; but those things which are revealed belong to us and to our children forever, that we may do all the words of this Torah.

The movie Men in Black has an interesting premise. There are evil forces all around us—aliens, who are continually out to destroy the world. As Agent K (played by Tommy Lee Jones) puts it “There’s always an alien battle-cruiser, or a Corillian death ray, or an intergalactic plague that’s about to wipe out life on this miserable planet. The only way that these people get on with their happy lives is they DO NOT know about it.”

So what saves us from all of these evil forces? Why it’s the Men in Black of course. As Will Smith puts it in the music video for the movie, “”We are the best kept secret in the universe. Our mission is to monitor extraterrestrial activity on earth. We are your best, last, and only line of defense. We work in secret, we exist in shadow and we dress in black.”

The movie Men in Black is nothing more than a modernized and updated version of famous Jewish legend: the Lamed Vav Tzadikim, or “lamed vavniks,” the 36 hidden righteous people. There is a teaching in the Talmud that says the world depends on lamed vav tzadikim, on 36 totally righteous and hidden people for its existence. Later teachings describe these “hidden tzadikim” as very humble, ordinary, normal appearing people. Yet the existence of the world depends on their quiet and unassuming faith and righteousness. There are many folk tales which describe some kind of great danger that faced a community, and one of these lamed vavniks quietly appeared, took care of things, and once again faded into obscurity.

This week’s Torah portion also speaks of secret and hidden things. Deuteronomy 29:28 reads: “The secret things belong to the Lord our God; but those things which are revealed belong to us and to our children forever, that we may do all the words of this Torah. This verse appears in a context of God bringing judgment down on the heads of the people. The simple meaning of the text therefore is that you shouldn’t think because you didn’t get caught, you’re safe. God is aware of the secret things, the hidden things, and God will judge you and punish you for those hidden things. The flip side of this, is an admonition, in a sense, to the community: the revealed things belong to us. We should not ignore wrongdoers in our midst. We should judge them, and see that justice is done.

But there is more to this simple seeming verse than meets the eye. R. Yechiel Meir of Mogelnitz, a Chasidic rebbe, pointed out that for every good thing, there is a proper and suitable quantity. There is such a thing as “too much of a good thing,” and if you try to grab too much, you can end up with nothing. The lamed vavniks, the hidden tzadikim, are a good thing. But even with something as important as these hidden righteous people, R. Meir says that whoever adds to a thing, ends up making it worse. R. Meir points out, if all of us were hidden tzadikim, where would our children and congregations learn how to be righteous? So this is the meaning of our verse: the hidden things, hidden righteousness, is for God alone. Only God knows about the doings of righteous people who are hiding. But the revealed—people who reveal their righteousness, who are not in hiding—are for us and our children. They serve as role models to teach the proper way to conduct one’s self.

In his book “Rabbi as Symbolic Exemplar,” Rabbi Jack Bloom points out that this is especially true for rabbis. People expect their rabbi to live the ideal Jewish life that most of the rest of the community doesn’t even aspire to. Some of my colleagues complain about living life in a fish bowl, and not being comfortable with it. And, it can of course be difficult if a person feels he is being judged by a standard far different than the standard used for everyone else.

The Talmud has some amazing stories of the lengths some students went to emulate the behavior of their teachings. One student went so far as to try and watch his teacher in the bathroom, or in the bedroom, claiming, that “this too is Torah.”

What’s the message your child gets if you tell him that learning is important, but you never open a book? What’s the message if you tell your child that attending synagogue is important, but you drop him off and go do something else? Have you seen the ads lately which show a kid being held for stealing something, and his father comes in and gives the kid a stern talking to, with Dad saying, “where did you learn such a thing?” And the kid responds, “but Dad, you steal satellite signals?” If you take your 12 year old kid to an amusement park and buy him an entry pass for kids UNDER 12, you’ve just thrown $5,000 a year worth of a Jewish day school education down the drain to save $5.

And this is an important message for the high holidays. It is now just one week until Rosh Hashana, the Day of Judgment. As we review our behavior over the past year, as we prepare to judge ourselves and think about the areas where we need to improve, it’s not enough to simply fulfill the standard model of teshuva and try and fix any damage that we have done. We need to go further than that. We need to consider that we are role models to others around us—especially our children, but also to other people in our circles of colleagues, friends, and acquaintances. Are we living our lives in a way that sets a good example for others?