1. And Moses gathered all the congregation of the people of Israel together, and said to them, These are the words which the Lord has commanded, that you should do them. 2. Six days shall work be done, but on the seventh day there shall be to you a holy day, a sabbath of rest to the Lord; whoever does work in it shall be put to death.

The commandment to observe Shabbat has already been given a couple of times in the Torah, most notably in parsha Yitro as part of the ten commandments. In this week’s parsha why does Moses again repeat the commandment, specifically starting out by “vayakhel,” by gathering the people together? What is there new for us to learn from this version of the commandment that we couldn’t have learned earlier?

To understand what’s going on in this week’s parsha, we need to put it in the context of what has been happening in the ongoing narrative in the Torah. In last week’s Torah portion, Israel committed the great sin of idol worship, creating a Golden Calf. Not long after witnessing the miracles that God performed in Egypt, the people became frightened because Moses delayed coming down off the mountain, and they “fell off the wagon,” and engaged in idol worship.

Rashi explains that the events described in this week’s parsha happened on the day after Yom Kippur, the day that Moses came down from the mountain the first time with first set of tablets with the Ten Commandments. At the time of this week’s parsha, when Moses gathered the people together, it is true that Israel had committed the sin of the Golden Calf, however God had also already been appeased and reconciled with Israel after the intervention of Moses. God wanted to destroy the people and start over with Moses; Moses convinced God to spare the people.

Rashi brings a surprising teaching that the people did the sin of the Golden Calf only to instruct future generations about the power of teshuva, repentance. To show that even after such a serious sin as idol worship, it is still possible to turn back to God. This week’s parsha, starting with the repetition of the commandment to obey the Sabbath, is specifically showing us that observing Shabbat is a powerful part of the process of returning to God. In the Talmud we are told that anyone who keeps the Sabbath according to its laws, even if he did idol worship like the generation of the Flood (even worse than the sin of the Golden Calf), his sins are forgiven him. Observing Shabbat has the power to purify a Jew of his or her sins, regardless of how low he’s fallen.

The Slonimer Rebbe points out that this is actually very surprising advice in a way. After all, Shabbat is the high point of the week, the time when you come closest to God, the time for a real cleaving with God; the polar opposite in fact of idol worship, which is being so distanced from God that you are worshipping something else entirely. Wouldn’t logic suggest that if you are very distanced from God you need to work your way up to reaching the heights of closeness to God that is the goal of Shabbat? Isn’t it too big a jump, like going from a totally dark room into bright sunlight?

What gives Shabbat this remarkable power to bring the greatest sinner back to God is really the power of community.

A few weeks ago I had what for me is an unusual experience: Shabbat without community. I had surgery on a Friday, and Shabbat was spent recovering at home. Most of that Shabbat was spent sleeping. I observed all the traditional observances—we had a Shabbat dinner, I prayed, etc.—but all without the presence of community.

More Jews have been brought back to Judaism by an exciting Shabbat experience than by anything else. I read a story a while back about a young man who was a totally secular Jew who lived near the ultra-religious neighborhood of Mea Shearim in Jerusalem. He went out to protest against the religious people who wanted to close the street on Shabbat. He went out to speak about his right to do what he wanted, to observe or not observe Shabbat in whatever way worked best for him. One of the religious people on the other side challenged the young man to come to spend Shabbat with his family, so he could learn first hand what they were talking about. Not having a graceful way out, the young man reluctantly accepted…and was amazed by the warmth, love, and joy that filled the Shabbos table. He became a regular visitor to that family’s home and eventually became a ba’al teshuva, a returnee to Judaism.

A couple of years ago there was a horrible terrorist attack at the Dolphinarium disco in Tel Aviv. 21 young people—kids in their late teens and early twenties, my oldest daughter’s age—were killed while standing in line to get in to the popular disco. Mostly young Russian emigres. A Chasidic rabbi friend of mine was at the Satmar Beit Midrash the following week, and heard an amazing exchange: “What can they expect?” said a stout young Satmarer avrech (married student) commenting on the bomb outrage. “They go dancing in a disco on Shabbos night in Eretz Hakodesh (the Holy Land)? It’s an invitation to the Satan!”

But a bent, white-haired chassid gently raised his hand and said: “They grew up in Russia knowing nothing about Yiddishkeit. They came here and no-one taught them a thing about Yiddishkeit. What do they know, except to go out dancing on Friday night? For that the Ribono Shel Olam (Master of the Universe) will forgive them. The question is: Will He forgive us for the way WE keep the Shabbos? After all, we claim to know something about Shabbos. If we were to sing, dance and rejoice the way we should on Shabbos, it would be so powerful that nobody would feel the slightest desire to go out to the disco!”

And that, my friends, is the power of “vayakhel,” gathering together. And that is the reason we need to continue to work to bring more ruach, more spirit, into our Shabbat. 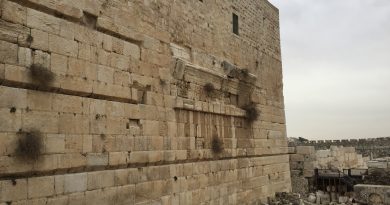