Do you remember learning the Second Law of Thermodynamics in high school?

I remember when I learned it—I thought it explained a lot of things, like the way my room looked when I was a teenager. For those who may have forgotten, the Second Law of Thermodynamics basically says that the universe prefers disorder to order. Energy tends to get dispersed. In physics we see it when something hot gets cool: the concentrated energy in the hot object gets spread out until it reaches equilibrium with what’s around it. The Second Law of Thermodynamics says that all things being equal, systems will tend toward becoming uniformly disordered.

It takes effort to counter this tendency toward disorder, or entropy. The effort, however, is well worth it. When we apply our will and counter the tendency toward disorganization, and become more organized, we reap many benefits. The fact that so many of us can afford something as complicated as a car is largely because of the invention of one of the great
organizing ideas of all time: the assembly line. Taking the same amount of man hours of labor but organizing it differently can produce wildly different results.

Mankind’s greatest achievements sing the praises of organization. The fact that in Canada less than 3% of the population works on farms, yet they can feed all of us, is a testimony to the power of organization—all the machines, irrigation, improved seed, fertilizer, etc., is the product of many highly organized systems.

Another of Mankind’s proudest accomplishments is that we have sent people to the moon. The amount of coordination and organization it takes to leave our planet and work and live in space is truly astounding.

But organization is not something just for large scale accomplishments like these. Every small business person has learned how to organize his human and financial resources. It’s one of the critical ingredients for success in any enterprise.

Being organized of course applies not only to organizations, but to individuals. You ever watch the TV show West Wing? One thing is not fiction—the President of the United States has his schedule organized down to the minute. Perhaps a bit extreme, but I suspect most of us could benefit from taking tighter control over our daily routines.

Stephen Covey wrote a best selling book, which has become a sort of franchise, called “7 Habits of Highly Effective People.” Of Covey’s 7 habits, three of them have to do with being more organized.

Sad to say, the original impetus for getting organized very well may have been so that we could fight and kill each other more effectively. It was recognized a very long time ago that an organized Army is a more effective fighting machine than one that is unorganized. It’s not only the US military’s superior technology which makes it such a formidable force—their superior organization and training is at least as important as their technology. It’s a pity that the United States does not seem to have been able to bring the same organizational strengths to making peace.

And a military motivation may be the reason why in this week’s Torah portion, Bamidbar, our ancestors were commanded to be organized. In Numbers 1:52 we are told “And the people of Israel shall pitch their tents, every man by his own camp, and every man by his own standard, throughout their camps.” We are not to be a random crowd, camping out wherever we feel like it. We are COMMANDED to bring order into our camps.

It might seem like this commandment is simply a practical matter. Perhaps the commandment was made to prepare the people for the military campaign to conquer Israel which was yet to come. Maybe they were directed to organize in a certain way for self-defense purposes.

Rabbi Eliyahu Dessler lists three reasons for putting things in order.  First, order is a good thing for its own sake. It creates a feeling that everything is under control, and therefore a feeling of confidence.  Whether it’s an army going out to battle, or a businessman off to work, feeling on top of things is good attitude to have. Another reason is practical—so you can find things when you need them. Whether it’s a tool, a file folder, or the division of an Army (like in this week’s parsha), you are more effective and save time if you know where your stuff is. And a third reason is that some things don’t work if they are not ordered
right, like a machine which will not work if some of the parts are missing. A hockey team with the goalie in the wrong place is not going to get very far.

There is more to order, however, than simply these practical benefits.  Rabbi Simcha Zissel of Kelm says that someone who is careless in his behavior, who is not organized and precise in his deeds, will also be confused in his thoughts and opinions and will not be able to properly serve God. Being organized is not just a practical matter, but it is a spiritual matter.

Cheshbon haNefesh, an 19th century Mussar text, teaches that there are people who are good people, knowledgeable in Torah, wise, with many fine character traits, who lack order in their household affairs, in their dealings with others, in their studies, or in their prayers. We certainly can see this—there is no direct correlation between how smart, how knowledgeable, or how kind a person is and how organized he is. Yet someone who is not organized is spiritually penalized in two ways. In the first instance, if you are not organized, you are going to waste time.  You will waste time looking for stuff, and some things won’t work right.  Time that could be spent doing something important—like studying Torah, or volunteering at a food bank, or at a school—will instead be frittered away and wasted.

Furthermore, people who are unorganized in conducting their lives generally bring this lack of organization to their minds as well. As a result, they often have trouble staying focused on one task at a time.  Sometimes we try to make up for a shortage of time caused by a lack of
organization by “multi-tasking,” by doing more than one thing at a time.  Some people are proud of their ability to multi-task, see it as being “efficient.” I don’t know about you, but when I’m driving down the road and see a woman putting on her makeup behind the steering wheel, I give her a wide berth. I saw a great billboard a while back which showed someone eating behind the wheel of car. The caption read “the world’s most dangerous restaurant.” People who multi-task may find they multi-task even when they don’t want to, which is another way it can be a spiritual liability. If you are thinking about your business affairs or
lunch when you are reciting your prayers, you are not really praying. Developing a deeper feeling of connection with God in your prayers requires being able to focus all of your attention on that one task.

Judaism believes in organized prayer. That’s why the book we pray from is the siddur, which literally means order. Similarly, what do we do on Passover? We celebrate a seder, which also means order.

Being organized is not only a trait for effective people—it is a trait for spiritual people.

May God bless us in our efforts to follow the advice of Rabbi Zissel,”Take time, be exact, unclutter the mind.” 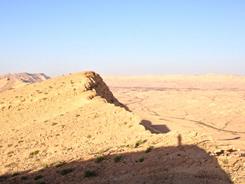 Bamidbar 5774 – Finding God in the Wilderness