We have all heard the saying “Man does not live by bread alone.” Where do we know those famous words from? Who said them?

Even many Jews are under the impression that this is a somehow a Christian teaching. These words ARE found in the Christian Bible in the Gospel according to Matthew. When he says those words, however, Jesus is quoting from a verse from the Hebrew Bible: from the book of Deuteronomy, in this week’s Torah portion, Ekev where we read lo al halechem lavado, not by bread alone.

I often like to start my study of a verse with the pshat, the plain or literal meaning. Here’s a question for the doctors in the house: what would happen to you if you tried to live al halechem levado, on bread alone—physically, a diet restricted to bread?

On its most simple level, the pshat, this teaching, lo al halechem levado, not by bread alone, is literally true. Thanks to a wonderful web site called “The Straight Dope” I was able to find out what would happen if you tried to live on bread alone. Even if you expanded it slightly to “bread and water,” you’d only live about two years before you died a very unpleasant death from scurvy because of the lack of Vitamin C in your diet. So it is clearly true that man cannot live by bread alone.

Some people read this passage literally and use it as a springboard to gourmet meals. Cornell University has a website called “Not by Bread Alone: America’s Culinary Heritage” which has information on everything from gastronomy and the pleasures of dining out to kitchen technology.

The truth of this statement is illustrated by last year’s winner of the Oscar for best picture, Million Dollar Baby. If you haven’t seen the movie and somehow have avoided hearing how it ends and you plan to see the movie, you might want to leave for a couple of minutes so I don’t spoil it for you.

The hero of the movie, Maggie (played by a very buff looking Hilary Swank), has one ambition in life: to become a female boxing champion. She struggles to convince a particular trainer to take her on, she trains around the clock. Even though she’s dirt poor and sees boxing as a way out of her poverty, she is very clearly motivated by a lot of things besides money. She is so desperate to succeed and get the public acknowledgment of being a winner you can’t but help cheer her on.

She has a great ride up, makes lots of money, gets the fame and recognition she craves—and then in a bout for the world championship she gets sucker punched after the bell, hits her head on a stool and becomes a quadriplegic, paralyzed from the neck down.

She can’t take it—she clearly doesn’t live for bread alone, she has lots of money—but in her eyes, her life is over because she’ll never hear them cheering her name again. So she asks for help in committing suicide.

Maggie clearly needed more than bread—but what was it she was trying to fill the other side with, the side of spirit? Something very ephemeral, fame and recognition. Which is totally the wrong direction. When the Torah tells us “man does not live by bread alone,” it is not telling us that the other thing we need is ego gratification. A much better role model for coping with that kind of tragedy is the late Christopher Reeve, the “Superman” who went on to found a non-profit foundation that raises money for spinal cord research after becoming paralyzed in a horseback riding accident. Or Hilary Lister, a quadriplegic who recently sailed solo across the English Channel trimming her sails with a “sip and puff” control since she can only move her head. Those two clearly were able to find other things to sustain their spirit.

The trainer in Million Dollar Baby, Frankie (played by Clint Eastwood) clearly senses that Maggie needs something else besides boxing and money after her injury. He brings her some brochures for college classes.  Perhaps he was trying to take the advice of Rabbi Morris Adler, z”l, who said, “human beings do not live on bread alone. Human beings are not only body but also mind. Intellectual development is the most significant aspect of human life. Human beings are also seekers of good, faith, and justice.  Education brings us the acknowledgement that there is mystery in this world which our limited human understanding cannot comprehend.”

“There is mystery in this world which our limited human understanding cannot comprehend.”

We need to connect with that mystery in this world—we need to connect with God to find real fulfillment. After his accident Christopher Reeve discovered religion—he joined the Unitarian Church. When an interviewer from Reader’s Digest asked him why the turn to religion after nearly 50 years without it, he replied: “It gives me a moral compass. I often refer to Abe Lincoln, who said, “When I do good, I feel good. When I do bad, I feel bad. And that is my religion.” I think we all have a little voice inside us that will guide us. It may be God, I don’t know. But I think that if we shut out all the noise and clutter from our lives and listen to that voice, it will tell us the right thing to do. The Unitarian believes that God is good, and believes that God believes that man is good.”

Jews also believe God is good. “Man does not live by bread alone” is only a part of the verse in this week’s Torah portion. In context, the verse is steering us toward God. The complete verse reads “And he humbled you, and let you hunger, and fed you with manna, which you knew not, neither did your fathers know; that he might make you know that man does not live by bread alone, but by every word that proceeds out of the mouth of the Lord does man live.”

One of the few rabbinic commentaries on this verse I found, from R. Yakov Harlap explains the verse as saying the mannah our ancestors ate in the desert was not physically satisfying; the verse says that God both let you hunger and fed you with mannah. The people ate it, they could live on it, but they still felt hungry afterwards. The mannah was nourishing spiritually—the people knew they were being supported by the “mouth of God,” by the command of God, for the mannah descended from heaven. The sense of physical hunger was still there—but the people didn’t care, they were spiritually satisfied.

Most of us can’t achieve that level of being content to be satisfied spiritually while we still have a gnawing hunger in our bellies. In Pirkei Avot, the Teachings of our Fathers, R. Eliezer b. Azarya says Im ain kemach, ain Torah; im ain Torah, ain kemach, “without bread there is no Torah; without Torah there is no bread.” If you don’t have some bread—if you’re scrambling for survival trying to figure out where your next meal is coming from—it’s hard to spend much time studying Torah.

But how do we understand “without Torah there is no bread?” Plenty of Jews seem to manage to make a living without having Torah in their lives.

I’m sure we can all think of examples of people like that. I came across one in the newspaper earlier this week: a former head of a suburban Chicago school system, a man who was paid $183,000 a year, yet that wasn’t enough. He stole thousands of dollars, including milk money and library fees from one of the poorest districts in the state of Illinois. Ain Torah, ain kemach – more bread doesn’t cure the longing for more bread.

We need Torah—and I mean Torah in the broadest sense, as a knowledge of God—to help us learn to be satisfied, to know when we have enough.

Today we are celebrating the 50th wedding anniversary of David and Joan Katz. Judge David Katz is a living example of balancing Torah and kemach.

No one becomes a judge for the kemach, for the money—if you are successful enough as an attorney to be nominated for the Federal bench, you are almost certainly making a lot more money than a judge. A judge’s clerks are generally earning more than the judge they clerked for two or three years after leaving the clerkship. Judge Katz might not put it this way—but I suggest that it was somehow the Torah in him, the spark of the Godly in him, that motivated him to take a big cut in salary to serve the public.

May we all remember that “man does not live on bread alone”—but rather, as the verse tells us, we need both bread and the spiritual sustenance that comes with living a life al kol motza mi pi Adonai, according to what comes out from the mouth of God. Lord, help us remember that to be truly alive, to be spiritually alive, we need both bread, and to live our lives in a Godly fashion—which we Jews learn from the Torah. 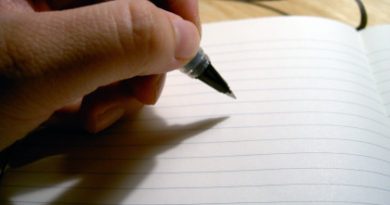