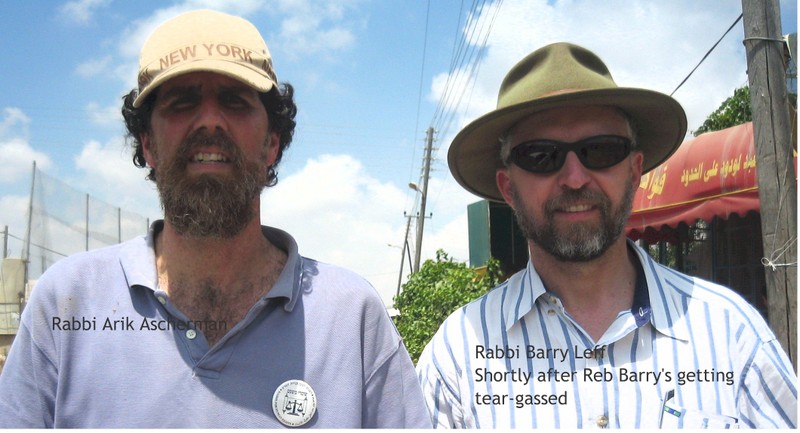 Today I got a good whiff of tear gas for the first time in 33 years.  That was not actually my plan for the day.

Accompanying me on this morning’s adventure were Rabbi Arik Ascherman, executive director of Rabbis for Human Rights, and a woman named Ruth who described herself as a “human rights activist” from LA.  I must admit I don’t really think of myself as an “activist,” but I suppose getting tear gassed and serving on the board of Rabbis for Human Rights probably is sufficient to qualify me as a “human rights activist.”

So how did I come to get gassed?  We were going to a Palestinian village called Beit Ummar in the West Bank, not far from Efrat and Hebron.  Some of the residents of Beit Ummar own agricultural land that is right next door to the Jewish settlement of Karmei Tzur .  The settlement is building a security fence outside the fence of the settlement itself.  A fair amount of Palestinian farmland is being confiscated for this buffer zone.  While in theory the Palestinians would be allowed to farm the land, as a practical matter they wouldn’t be, because when they go there settlers from Karmei Tzur threaten them, and on occasion have beat them.  Click here to read the International Solidarity Movement’s report on the situation.

To be fair, the settlers have a valid reason why they want a security buffer zone surrounding their settlement.  In 2002 three residents of Karmei Tzur were murdered by a terrorist infiltration.

The purpose of our visit was to go to the fields with some of the Palestinian farmers, in essence to shield them from the settlers.  We were told after they did some work on their trees, they were planning to hold afternoon prayers at the location, as a sort of peaceful protest.

When we arrived, the Palestinians were a little disorganized.  Besides ourselves, there were representatives from the International Solidarity Movement and the Ecumenical Accompaniment Program of the World Council of Churches, altogether about a dozen Israelis and foreigners.  Each of us had been given a slightly different story as to what the program was going to be.  We arrived at 10:30, sat around and had tea, had some conversation with the locals.  The going to work on the trees part never materialized; around noon we joined a crowd from the village to go down to the field (near the settlement) for afternoon prayers. 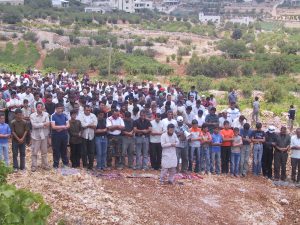 Everything started peaceful enough.  There was an Israeli military presence, and there was one slightly tense moment when an Israeli soldier got on the hood of his jeep and started waving his gun around.  One of the Israelis in our group convinced him that wasn’t a good idea and he got down.  The afternoon prayers proceeded uneventfully, about 100 yards from the settlement, under the watchful eyes of a group of about four IDF soldiers.

As the prayers finished and things were breaking up and people were starting to walk back to town, a small group of teens looked like they were getting ready to throw rocks at the soldiers.  Rabbi Ascherman did a quick intervention and got them to stop.  I breathed a momentary sigh of relief as a potentially bad situation was averted.  One of the soldiers started unnecessarily pointing his rifle right at people in the crowd who were acting peacefully — Arik once again yelled at soldier to put his gun down, and after a few sessions of yelling eventually complied.

It turned out I breathed my sigh of relief somewhat prematurely.  A few 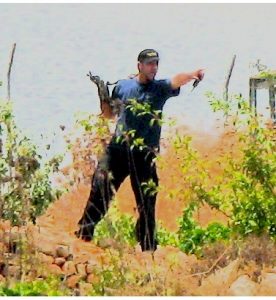 minutes later a settler came  running down the hill screaming, waving a gun.  Fortunately, the soldiers intervened and made him leave, but his presence undoubtedly helped inflame the already hot-headed Palestinian teens, and a few minutes later they got out the slings and started hurling rocks in the direction of the soldiers.  Totally ineffectively as they were too far away, but it was still certainly enough to get the soldiers attention.

I now have a much greater appreciation for why soldiers have responded with live rifle fire to these kids hurling stones.  We’re not talking about little kids throwing pebbles.  They are using slings that look like they are made of cloth, twirl them over their heads rapidly, with some pretty good sized stones, and when they let fly, those big rocks go quite some distance and can do some serious damage.  In addition to slinging stones at the soldiers, the kids used the slings to destroy the bulbs in some big streetlights that had presumably been setup for security purposes, and they started a small grass fire.

At first some of the kids parents’ did try and stop them, but the kids 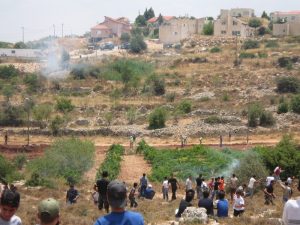 outnumbered the parents who were engaging them, and they just kept doing their thing.  We started heading for higher ground when the IDF started firing tear gas canisters at the kids to break up the crowd.  I thought that was a reasonably restrained response considering what was going on.  But I can certainly see how that situation had the potential to get very ugly — there were only four soldiers and about two dozen kids acting very rowdy–and 200 more Palestinians and others nearby.  Not an easy situation for crowd control.

At first the tear gas didn’t get anywhere near me; but then either one of the canisters went astray, or the soldier intentionally fired higher up the hill and I caught a good whiff of it.  My eyes stung and watered like crazy.  It definitely would have taken a lot of the fight out of me.  The last time I was exposed to tear gas was in the US Army’s Basic Training, when I had to momentarily lift my gas mask in a chamber filled with tear gas–both so we’d know what it’s like, and so we’d take instructions to put our gas masks on seriously.

As we were walking back to the car, I was furious, and not because the gas bothered me that much.  The whole situation was just so completely stupid and unnecessary.

And I felt like a stupid American who got taken advantage of.  I will gladly go out and defend anyone’s right to have a peaceful demonstration.  I will NOT defend someone’s right to go out and throw stones, engage in vandalism, and start fires.

There are all sorts of reasons given why the kids do these things, and reasons are given why the parents don’t stop them.  Maybe it’s all just a game, as the kids did stay pretty far away from the soldiers.  But it is so totally self-defeating!  When the court case comes up, the Palestinians have just given the settlers proof for why they need a larger area for their security fence.

The whole experience struck me as a metaphor for why there are such problems in the Middle East today.  I don’t know if it’s something in the water or what, but there sure is a lot of stupidity going on.  All the trouble was caused by a small group — less than 10% of the Palestinians present.  The vast majority I believe really did want a peaceful demonstration.  But they weren’t willing to stop the hot heads.  The same principle is at work for Palestine as a whole: the problems are caused by a relatively small group that really wants to engage Israel violently.  The majority of Palestinians have said in polls that would happily live in a two state situation at peace with Israel.  But that majority is not willing to stand up to the “hot heads.”

Last week’s Torah portion, when all this happened, was Balak.  At the end of parshat Balak, the Israelite people go crazy, abandon the rules and go whoring after Midianite women.  A plague breaks out which killed 24,000 people.

The plague was only stopped when Pinchas made a show of killing Zimri and Cozbi, which got the people’s attention and turned them away from their whoring ways.  Note that I don’t think this would have worked if Pinchas was a Midianite — if a Midianite killed a Jew, they would have just kept right on going.  The fact that it was a Jew who killed Zimri — a reminder to the Jews that what they were doing was not acceptable — is what made the message take hold.

I certainly don’t advocate anyone killing anyone, but I think there is a parallel here.  Israelis killing Palestinians is not what will ultimately lead to peace.  It’s going to have to be the Palestinians who recognize that violence is destroying their lives, not improving them.  And while we wait for that glorious moment, Israelis need to do what they can to try to avoid inflaming more violence by waving guns at people who are acting peacefully, or by denying Palestinians the right to farm their fields.  We should be leading them in the direction of peace, not the direction of hate.

I was only slightly disillusioned by my experience.  We have a responsibility to treat Palestinian non-combatants as humanely as possible, while at the same time we aggressivly go after the ones who would destroy us.  I say “kol hakavod”–I honor–those people who can go out and try to help the Palestinians and be exposed to this kind of foolishness without getting totally disgusted.  And that really is the test — to be nice to people who are compliant, do whatever you ask, make no trouble, that’s not such a big mitzvah.  But if you can continue to remember to honor the rights of people who aren’t acting so nice — well, that’s to really do the mitzvah credit!

Quite a day indeed.  Tear gassed, disillusioned, and to top it all off a mild sunburn.  Thank God I had a wonderfully restful Shabbat right after to regain my equilibrium.  Despite it all, I continue to believe it is incredibly important for us to continue to work to defuse the situation, to continue to talk with Palestinians, and to support them when their rights are being abused.  We’ll never have peace if all we do is fight.

Rabbis for whose human rights?

2 thoughts on “On Friday the Rabbi got Gassed…”