The fighting in Gaza and Lebanon has pushed a lot of other things aside in the last few days, but there was something else disturbing in the news here a few days ago.

WorldPride is planning to have their annual massive march and demonstration in support of tolerance and gay rights in Jerusalem in August of this year.  This is a huge event for the gay and lesbian community.  It is held in a different city each year.

The charedi (ultra-Orthodox) community is of course up in arms.  Typical headlines proclaim they are coming to defile the holy city.  The gays have accomplished what years of struggle and battle couldn’t–they have gotten the chief rabbis and chief imams to agree on something, and to jointly condemn the parade.  They’ve even asked the Pope to speak up.

None of that bothers me, everyone is entitled to their opinion, if one side can demonstrate so can the other.  What does bother me is that a few days ago it was reported that posters were being put up in Mea Shearim, a charedi neighborhood, offering a $20,000 reward for anyone who kills a gay person, and it included crude instructions on how to do it, and praise for the charedi Jew who attacked a gay person last year.

You might wonder "where do they come up with something like this in the name of religion?"  You need look no further than this week’s Torah portion, Pinchas.  At the end of last week’s parsha Pinchas killed a leader of the Jewish people who was engaging in public licentious behavior with a Midianite woman, running his spear right through the two of them.  This week Pinchas is offered God’s "Covenant of Peace."  Clearly, Pinchas behavior was pleasing to God.  This is the zealot’s favorite passage in the Torah.

Unfortunately, the zealots who are so punctilious about following all the rules of the rabbis of old choose to ignore what the rabbis of old have to say about this particular incident.  Without exception they say that we are not to take this as an example for us.  People cannot be killed without a trial and by order of a court.  They come up with all sorts of reasons why Pinchas was a one-time thing, but they are adamant about that — Pinchas was not to be an example to other people.

Even if one was to try and look to Pinchas as an example, it certainly would not apply in this case.  Yes, the Torah forbids male homosexuality.  Calls it a "toevah," an abomination.  But before you jump to conclusions and think it might in some way be OK to kill Jews who do something abominable to God, remember that eating non-kosher food is also called a "toevah."  Why don’t these modern day Pinchas’s run out to the nearest non-kosher restaurant and start killing people eating BLTs?

It’s because they are homophobic, not non-kosher food phobic.  Zimri’s (the Jewish leader whoring with the Midianite woman) sin which merited the death penalty was not public harlotry or fornication or adultery or anything like that.  It was idol worship.

There are many gays and lesbians who are very far removed from idol worship, who are dedicated Jews who try to be the best Jews they can be.  The film Trembling Before G-d illustrates this in very poignant terms.

To their credit, one of the largest charedi organizations has issued a statement denouncing these blood-thirsty posters.  Unfortunately, it is their rabbinic leaders who sow such hatred with the horrible vitriol they use against gays, lesbians, and other people they don’t like.

As we are now in the "Three Weeks," a period of national semi-mourning over the destruction of Jerusalem and the Temple, may those religious extremists inclined to hate gays and lesbians and others remember that the Second Temple was destroyed because is sinat chinam, gratuitious hatred. 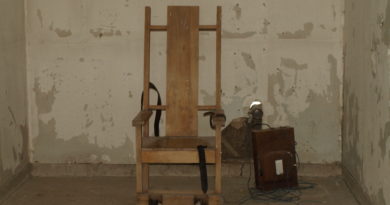 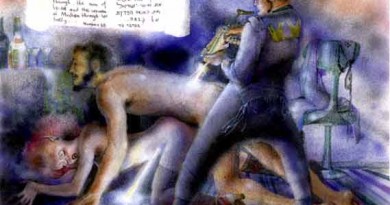