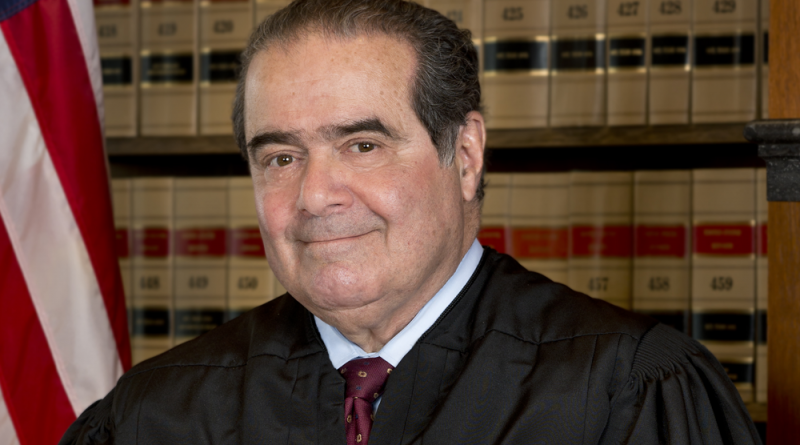 On Monday night I had a little debate with Supreme Court Justice Antonin Scalia.  I was worried that after the debate, my wife Lauri might decide she can’t take me anywhere–it was at a program for the law school she teaches for–but I thought it was fun.

After dinner and a few short remarks, Justice Scalia opened the floor for questions.  Now to understand the discussion, you have to know a little about Justice Scalia.  He’s definitely on the right wing of the Supreme Court–he’s often described as the “intellectual anchor of the Court’s conservative wing.”  He’s what’s called an “originalist:” when determining whether or not something is Constitutional, originalists hold that you should go by what was the original intent when the Constitution was first approved.  This puts him in opposition with the “evolutionists” who maintain that our understanding of the Constitution can evolve over time, as our society’s needs evolve–the “Living Constitution” model.  Justice Scalia would respond that if you want to “evolve” the Constitution the only way to do that is through a Constitutional amendment.

Personally, I’m something of an evolutionist when it comes to both secular law and Torah law.  The Constitution — or the Torah — may provide the basis for the legal system, but our understanding of those foundational documents–and the way we apply them–must be understood within the framework of the times we live in.  To use an extreme example, the intent of the 2nd Amendment (the right to keep and bear arms) may have been that citizens should be able to own any kinds of weapons they want.  It’s one thing to have such a principle when the most powerful weapon in the world is a cannon, and the most powerful cannons are unwieldly and large.  But is that same principle a good idea in an era when a nuclear weapon that can fit in a suitcase is a real possibility?  Somehow I don’t think so.  And I suspect even Justice Scalia might agree.  So it all becomes a question of how you interpret the law.

Another interesting bit of background: Justice Scalia is a practicing Catholic, and in his rulings he has supported the rights of Jews to practice their religion — more so than some of the secular Jews who sit on the Supreme Court!

There was a case a few years ago (Board of Education of Kiryas Joel vs. Grumet) when the residents of Kiryas Joel, a community of Satmar Hasidim, wanted to use state funds to build a school specifically to serve the “special education needs” children in their community.  The majority of the Supreme Court ruled it was not permissible, because to do so would violate the “establishment clause” of the Constitution, which says that the government will not do anything to establish one particular religion as the religion of the country.  The majority held that to allow the Satmar to build a special school for their kids with state funds would be violating that provision.  Justice Scalia’s minority disseent is one of the “smarkiest” pieces of judicial writing you are likely to encounter: “The Court finds today that the Powers That Be, up in Albany, have conspired to effect an establishment of the Satmar Hasidim. I do not know who would be more surprised at this discovery: the Founders of our Nation or Grand Rebbe Joel Teitelbaum, founder of the Satmar.  The Grand Rebbe would be astounded to learn that after escaping brutal persecution and coming to America with the modest hope of religious toleration for their ascetic form of Judaism, the Satmar had become so powerful, so closely allied with Mammon, as to have become the establishment of the Empire State.  And the Founding Fathers would be astonished to find that the Establishment Clause–which they designed “to insure that no one powerful sect or combination of sects could use political or governmental power to punish dissenters,”–has been employed to prohibit the characteristically and admirably American accomodation of the religious practices (or more precisely, cultural peculiarities) of a tiny minority sect…”

The question I posed for Justice Scalia was what do we do when principles from the Constitution conflict? On the one hand, as he had pointed out earlier in the evening, the 8th amendment allows for capital punishment.  On the other hand, there is clearly a strong concern about the possibility of punishing an innocent man — hence the standard of evidence in criminal cases is “beyond a reasonable doubt,” whereas for civil cases it’s simply a “preponderance of the evidence.”  So, I asked, would it be fair game for the Supreme Court to put in place sufficient procedural barriers to avoid the possibility of executing an innocent man as to effectively render capital punishment inoperative?  Justice Scalia argued no–and he presented arguments that were actually not really on point about the Constitutionally of mandatory death sentences for particular types of crimes.  Not being one to sit down and shut up after receiving an unsatisfying answer to a question, I made it a little bit of a debate with a follow up:  to make clear what I was getting at, I allowed as to how I wasn’t a lawyer, I was a rabbi and more expert in Jewish law than secular law–to which he replied something like “Thank God,” which I wasn’t sure how to take–and I opined as to how the rabbis were “originalists” regarding the Torah (after all, it comes from God!), yet they effectively eliminated capital punishment through procedural barriers.  Justice Scalia replied “I know about those rabbis–the Sanhedrin would declare a mistrial if they voted unanimously to condemn someone to death because they assumed there must have been something fishy going on!”  The implication seeming to be that this was really going too far.

We did a little more back and forth, but his conclusion is that the Court has done exactly what I suggest–installed “excessive” process barriers to capital punishment, and he opposes it–he says that the due process that was originally installed is sufficient.  If I could have continued the debate, I would have pointed to the State of Illinois implemented a moratorium on capital punishment because DNA testing found there were innocent people on death row.  Obviously the “due process” that had been put in place was NOT sufficient to prevent a potential travesty of justice.

Justice Scalia’s presentation did not convince me of the wisdom of being an originalist, and I’m equally certain I didn’t move him a millimeter in the other direction.  But it was an interesting debate, and a couple of people came up to me afterwards and said “I’m with you rabbi!”  Lauri was impressed that I came out with my skin intact — a non-lawyer debating a Supreme Court justice?  She compared it to an unarmed person being sent into the arena against both the lions and the gladiators at the same time.

Maybe I should go to law school so I can argue cases of human rights in front of Supreme Court justices for real!  🙂

13 thoughts on “The Rabbi and The Supreme Court Justice”