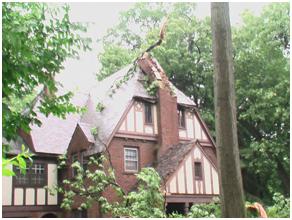 If everything that happens, happens because it’s God’s will, what’s the message to having a tree fall on your house within a few weeks of when you are supposed to be leaving to make a new life in Israel?

That’s what happened last Friday. One of the kids suggested that perhaps it meant God wanted us to stay in Toledo. Fortunately, I go with the opinion of Rambam, which basically says “stuff happens” because God made the world that way, not because God is mad at you.

Lauri, being a believer in the concept of when given lemons make lemonade, called the local media and invited them to do a human interest story on the irony of a rabbi’s family getting ready to move to Israel when a tree falls on their house and does significant damage. We actually got on the TV news twice, with the for sale sign and phone number prominently displayed – and of course, as they say, there is no such thing as bad publicity. Maybe someone will see it and say “hey what a cool house – other than the broken chimney” – and call about buying it. I’m not sure it got on the news, as it was Shabbat and I didn’t see it, but one of the TV reporters, a nice Jewish girl, came in and filmed us doing a dry run of our Shabbat dinner, as our Shabbat guests had already arrived when they were filming (this being summer, Shabbat was actually still a few hours away so I didn’t mind them filming us).

If I went into the local pharmacy and sat and did the free blood pressure test, I bet my BP would come out at least 10 or 15 points higher than usual. We are definitely now in the heat of the high stress part of the move to Israel. And of course the tree falling on our house – and did I mention that it also damaged one of the cars? – does nothing to help our stress level.

But one thing that did help – and here I’m going to give Allstate some free publicity – is the insurance people have been great. No hassles, quick response, everything will get taken care of with very little out-of-pocket expense to us, and in theory, everything will be done before we leave. When shopping for insurance coverage I’m sure most people focus on price, but our experience shows that quality of service should also be an important criteria.

As I reported earlier, Lauri already is working for the company she’ll be working for in Israel. Having at least one of us employed with a good job reduces our stress; of course for her, starting a new job inevitably involves at least a little bit of stress as you figure out the new job and how to get things done.

Other exciting news is we do have an apartment lined up. It’s large, with a view of the Old City, and while we might just barely be able to afford to rent it, we could never afford to buy it. I tried telling Lauri maybe we should not take it as it will be a great come down next year when we move into the sort of place we could afford to buy. Her good counterargument to that was “I’m not going to pass up a steak today because I’m going to have to eat hamburger tomorrow.” The apartment is in the Talpiot neighborhood; by interesting coincidence we had the rabbi of the Masorti (Conservative) synagogue in nearby East Talpiot as our guest this past Shabbat. Next month we’ll be guests at his shul for Shabbat. The small Jewish world at work.

Speaking of what we can afford, we changed our mind and decided not to bring the minivan. Since our house has not sold yet, we decided we could not afford to have that much cash tied up in a car. Oh well, I still think importing the van looked good at least on paper.

The last couple of weeks have been crazy busy and we have not made a lot of progress in packing. I was in New York last week for a Rabbis for Human Rights board meeting, and I was back in New York earlier this week for a meeting of the Conservative Movement’s Committee on Jewish Law and Standards. In between I made three new Jews (completed their conversions), had the synagogue’s annual meeting, sat through five hours of dance recitals (is that parental love, or what?), had the Hebrew Academy graduation, and more. Earlier this evening I participated in a Hunger Awareness Day program at a local church. Fortunately, next week looks little lighter schedule wise, which is fortunate since the movers come the following week, ready or not.

We had an hour-long phone conversation this morning with our shaliach, the representative from the Jewish Agency who has been coordinating our aliyah. She went over a lot of very helpful details on what we can expect when we get to Israel, especially regarding stuff relating to the government, getting our ID cards, signing up for health plans and banks, etc. There’s a lot to do, and of course we’ll be doing it as novices to the bureaucracy. Universal advice is bring money when visiting government offices as there are always fees, and patience is a virtue.