And what a welcome home! I might not have felt that emotional on the airplane, but the arrival in Israel was totally amazing, and very emotional.

On the flight they processed the paperwork for our teudat zehut, the Israeli citizen identity card – that one thing alone saved us several trips to various offices and much standing in line. They also cleared us through passport control while we were still in the air. When we landed we went straight to our welcoming ceremony.

The Jerusalem Post has an article about our flight, which you can read here. I was very moved by the welcoming committee from the Conservative Movement – Rabbis Barry Shlesinger, Peretz Rodman, and Paul Freedman (and his wife Nina) were on hand, as well as Masorti CEO Yizhar Hess. They had a big, professional vinyl banner which read “The Masorti/Conservative Movement welcomes Rabbi Barry Leff and family to Israel.” I don’t have a picture of the banner yet, I’ll post it later when I get it. When I acted slightly abashed at all the attention, Rav Barry compared me to Rabbi Shlomo Riskin, who also made aliyah mid-career, which is considered an unusual career move. Of course, Rabbi Riskin sets the bar pretty high – he’s the rabbi of Efrat and the founder of all sorts of 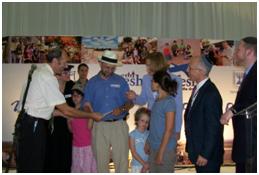 Jewish educational institutions, as well as being probably the single best known voice for Modern Orthodoxy in Israel. I’ll be happy if I get a job! J

I think after they saw the article in the Toledo Blade which I mentioned in an earlier posting, the Nefesh people decided we have an interesting story and my kids at least are photogenic, so they selected us to be sort of a public face of the flight. I think there may also be interest in promoting Conservative aliyah. In any case, as part of the welcoming ceremony, our family was selected out of everyone who arrived to receive our new immigration documents from Tzipi Livni, Israel’s Vice Premier and Foreign Minister on the stage as part of the ceremony. In the picture at the right, at the left handing me my document is Boris ? I think from the Ministry of Immigration, and Livni at the right, and to the right of her Nefesh b’Nefesh co-founders Tony Gelbart and Rabbi Yehoshua Fass. A few days before we left Toledo, I got a call from a publicity person at Nefesh, that an Israeli TV

station wanted to do a story about the flight that told it from the perspective of a family making aliyah. They decided it wasn’t practical to send a film crew to Toledo, so they asked us to shoot some video along the way that they could use. When we got off the plane, a camera crew started following us around while we picked up our luggage, arriving at the absorption center, etc.

It was a pretty brief segment, but they did use some video that Lauri shot in Toledo, and some stuff she shot in New York, us saying goodbye to family members etc. They also used some stuff I shot on the plane as we were landing, and then a few brief pieces of interviews with us. Pretty cool to see video we shot on Israeli national TV. The report, unfortunately, was not completely accurate. Instead of focusing on my being a rabbi, they focused on my prior life in Silicon Valley, and completely erroneously (they literally made this up!) said that I sold my company for $10 million! Only in my dreams. What I got for my company was “bupkis,” which is Yiddish for “nothing,” nada, zippo. A good time, a fascinating run, but I certainly didn’t get rich out of it. It is definitely the most egregious error in any article or report about me. Usually it’s some minor detail they get wrong – like the Blade report which said I was born in New York, when in fact I was born in Germany (but did grow up in New York). But to make me a multi-millionaire? Oy. Oh well. I’ve now got my 30 seconds of fame in Israel. Someone on the street even mentioned seeing me on TV!

The absorption process is going well. We have a bank account, we’ve picked a health plan, Lauri has already opened up her temporary office (from where I am writing this), and I’ve already had a job interview. The kids go to Camp Ramah next week. We have a rental car and are getting around. We are temporarily staying at an “absorption center,” which has the great advantage of being free. The disadvantages are it’s small – a living/bedroom, tiny kitchen with a fridge and 2-burner stove, and one bedroom. And it’s pretty noisy until the wee hours of the morning with the young immigrants hanging out right outside our window two floors below. But we don’t spend much time there. We’ve got lots of invitations for Shabbat and meals, it really feels like the whole country is family.

There is a passage in the Amidah that feels completely different now when I say my prayers – it’s the prayer for the ingathering of the exiles. We bless God and say “who gathers together the dispersed of his people Israel.” It feels really different now that I’m not praying for my ingathering, but for the ingathering of the rest of you who are still living in exile…l’shana ha’ba’ah birushalayim, next year in Jerusalem!