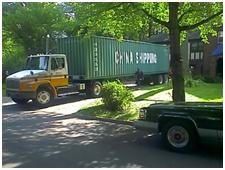 The picture at left was taken about seven weeks ago…it’s a picture of the shipping container in our driveway in Toledo, ready to be loaded with all our possessions and 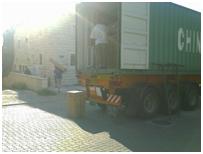 sent half way around the world. The picture at right is the very same container sitting in front of our new home in Israel. I find it somehow strangely satisfying to know that the exact same box made the trip to both places.

We’re not done unpacking yet, but so far, thank God, the damage has been minimal … in fact, less damage than we’ve typically seen on domestic moves. A chipped coffee cup. A couple of broken hangars. In other words, NOTHING. I’m sure it’s because everything was so thoroughly and carefully packed…unlike when we’ve moved ourselves!

The movers were supposed to help us set up beds, haul away the excess wrapping material, etc. Instead, it was a Friday delivery, and I think they were all eager to start their weekend, and they were gone before they did a thing besides unload the truck. They are supposed to be back tomorrow to help finish what they were supposed to do on Friday. Oh well. At least we’re camping out surrounded by our belongings and sleeping in our bed now!

So far the kids continue to be excited about the move, and they remain convinced it’s a great thing we did in bringing them here. They’ve been going to ulpan to get a head start on their Hebrew, and it does seem to have been helping.

It’s too bad I was too busy to write a d’var Torah last week for parshat Shoftim. It’s full of great stuff, including advice for the king, advice which the leaders of Israel could definitely use. The king is cautioned against coveting money and pursuing too much gold, silver, and horses – the current prime minister is under investigation for “excessive coveting” in an illegal fashion, his predecessor was caught up in a financial scandal which mostly landed on the son. The king is also warned not to take too many wives – a warning the former president of Israel, Moshe Katzav, should have paid attention to. And the king is taught to write a copy of the laws of the Torah and to keep them by his side at all times. With all the corruption here it seems the leaders have been straying from the Torah, even the ones who consider themselves “religious.” Oy. And of course besides issues of corruption, there are also definitely issues of competence … the government lost the confidence of the people over the Lebanon debacle last year.

Baka Diary reports that the cab drivers are predicting war in September. I certainly hope they are wrong; although Baka Diary’s analysis of how the intelligence works, figuring things out from a lot of little details, is certainly true. The example they gave me when I was in military intelligence was you can figure out things like how many troops are in an area by how much toilet paper they order. But I think the likelier explanation for the extended reserve duty this summer, etc., is that the government doesn’t dare get caught unprepared, or respond in an inappropriate fashion like they did last year. They need to be ready, and they need to use better judgment. Maybe all the senior government officials should carry a copy of the Torah, just as the kings of old were instructed!

Why I Love Jerusalem…