The French say that if you’re over 50 and you wake up in the morning and nothing aches, it’s a sign that you’re dead.

On the other hand, whatever age you are, if you wake up in the morning and something aches, it might just be a sign that you have been sleeping on a bed in an Israeli absorption center. Hard is something of an understatement. The beds are softer than the floor would be, but that’s just because the floor is made of tile. If the floor were carpeted, it would be a close call.

But the truth is I’m not complaining about the absorption center. It’s practically free, and I really feel it’s part of the “new immigrant” experience. Our very small taste of roughing it in a spartan two bedroom apartment is nothing compared with what many of our predecessors went through on arrival in Israel. We’re together with new olim from all over the world, mostly Americans, French, and Russians. The kids are making friends and having a good time, which is one of the reasons we wanted to stay in an absorption center. I knew the strategy had worked yesterday when I got home from ulpan and asked the kids if they wanted to go out and do something, and they said no, they would rather stay at the center and participate in the kid’s activities. At first I had to push them to make them go to the kids activities.

Speaking of ulpan, the kids started theirs yesterday. Unfortunately, the level is way to basic for any of them, even Devorah. It’s aimed at real beginners. Some of the kids there don’t know the alef-bet. Katherine is acting as the translator for the kids who don’t know anything at all. Still, it gives them something to do, and hopefully it will help just being around some Israelis. I’ve been going to the ulpan at the Conservative Yeshiva, which is also perhaps a little easy for me, but it’s worth it just to spend a few hours a day sitting around chatting in Hebrew.

Jerusalem really is the crossroads of the Jewish world. There are so many small coincidences, all the time. Someone in my ulpan is a close friend of the daughter in law of a former congregant from Toledo. Standing in line at a health clinic, the guy behind me has parents in Vancouver who belong to the shul I used to be at, and he heard me give a sermon on aliyah four years ago. There’s a contingent of people from the shul I used to belong to in Northern California studying at the Conservative Yeshiva. The other day we got together with some other people we know from Toledo, daughter and son-in-law of congregants from there. It’s kind of fun getting to live somewhere that I get to reconnect with all sorts of people from my past, just staying here.

The political situation here is always amazing. Lots of controversies going on. The Supreme Court and the Ministry of Justice are having a big public disagreement about a deal that was cut with former president Moshe Katzav, charged with sexual harassment. Ehud Barak is very concerned about the high rate of draft evasion – he said people who go off to fight to defend the country shouldn’t feel like “friarim,” which is Hebrew for “suckers.” The governments popularity is so low it really has a feel of being temporary. There are no elections scheduled yet, but Netanyahu is already campaigning with campaign slogans plastered on the side of buses. I’m really looking forward to the first time I get to vote in an Israeli election!

This week’s Torah portion, Ekev, contains a famous line: “Man does not live by bread alone.” I had a long philosophical (in Hebrew) last weekend with an Israeli couple, hosts of a B&B we stayed at in the Galil on that very topic. They definitely agreed that living in Israel is spiritually far more important than the physical comfort that one can have living in America or elsewhere. Which is true. It is amazing to be here, and there really is a sense of family. I’ve had so many people, strangers really, tell me as new oleh, “if there’s anything I can do to help, call me.” And what’s really really cool, is that they mean it!

The place we were staying last weekend, Amirim, is very interesting. It’s a moshav in the Galillee entirely composed of vegetarians. The place is kind of like “Santa Cruz in the mountains.” Beautiful views, in the forest, everyone is vegetarian, all the restaurants and guesthouses are vegetarian, all sorts of “natural therapy,” massage, Jacuzzis, etc., etc. The population is mostly secular, but there are enough religious folks to support a couple of minyans. Was a great weekend. 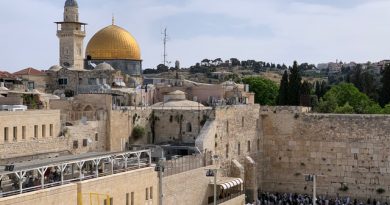 Moving Past the Blame Game

2 thoughts on “Life in Israel”