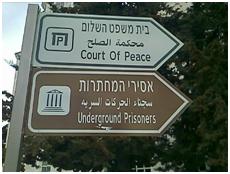 Today I had the rare opportunity to perform a mitzvah I have not done before:  redeeming captives.

This is an incredibly important mitzvah.  In the Mishneh Torah (Hilchot Matnot Aniyim) Rambam says:

"The redeeming of captives takes precedence over the feeding and clothing of the poor. Indeed there is no religious duty more meritorious than the redeeming of captives, for not only is the captive included in the generality of the hungry, the thirsty, and the naked, but his very life is in jeopardy. He who turns his eyes away from redeeming him, transgresses the commandments: You shalt not harden your heart, nor shut your hand (Deut. 15:7), Neither shall you stand idly by the blood of your neighbor (Lev. 19:16), and He shall not rule with rigor over him in your sight (Lev. 25:53). Moreover, he nullifies the commandments: You shall surely open your hand unto him (Deut. 15:8), That your brother may live with you (Lev. 25:36), You shall love your neighbor as yourself (Lev. 19:18), Deliver them that are drawn unto death (Prov. 24:11), and many similar admonitions. To sum up, there is no religious duty greater (Mitzvah Rabba) than the redeeming of captives."

However, when contemplating performing this great mitzvah, it never occurred to me that I would fulfill it by redeeming a rabbi from the hands of my government.  Yet that is how it worked out.

Thursday (March 13) night Rabbi Arik Ascherman, executive director of Rabbis for Human Rights, was arrested for refusing to sign a police order forbidding him from going to the village of Silwan for two weeks. The Israeli paper Haaretz ran an article which you can read by clicking here.  An excerpt from the article follows:

"Israel Police on Thursday arrested Arik Ascherman, the executive director of Rabbis for Human Rights, for "inciting Palestinians to oppose the police" in East Jerusalem.

Heated tensions between residents of the Silwan village in East Jerusalem and the Israel Police erupted over excavation works that have recently began in the village. The excavations are being carried out by the Israel Antiquities Authority (IAA) and are sponsored by Elad association, which promotes the "Judaization" of East Jerusalem.

Silwan residents say the excavation work is being carried out directly underneath their homes, and have proceeded to set up a demonstration tent on a private lot belonging to one of the village residents."

Friday morning, a few of us affiliated with RHR showed up at the Jerusalem Magistrate’s Court – in Hebrew, "Beit Mishpat L’Shalom" which more literally translates as "The Court of Peace" – for Arik’s hearing.

Apparently, the only way you get to achieve peace at the Court of Peace is by agreeing with the police and giving up your civil rights. I am saddened to say that what we witnessed was a travesty of justice.

After waiting for well over an hour, Arik was finally brought into the tiny courtroom for his hearing (in chains, for God’s sake! They thought the famous rabbi was going to flee?). When I say tiny, I mean tiny. I can’t say I’ve seen all that many courtrooms, but this one was certainly a lot smaller than my living room. The court is housed in a lovely old building, a former hostel for pilgrims that is part of the Russian quarter compound. The courtroom presumably was a former guestroom. With about a dozen of jammed in there – the judge, the court recorder, three cops, the lawyer, Arik, and an assortment of supporters – it was standing room only.

The judge was NOT interested in hearing what happened at Silwan, or why Arik should not have been given the order in the first place. All the judge had to say was "sign the agreement, or stay in jail." At one point the cop who brought the complaint, the judge, and Arik’s lawyer were all shouting simultaneously. (After which the judge had to say "this isn’t some kind of Israeli talk show where everyone yells at the same time!) For me it was such a classic Israeli moment, and it was a little surprising to see it even in a courtroom. Three people yelling, no one listening. To his great credit, Arik refused to sign the agreement and the judge ordered him hauled back to jail.

At this point Arik’s lawyer went off to convince him to sign the document. My wife Lauri and I were sitting outside the courtroom debating what he should do. Lauri was all in favor of Arik staying in jail – she feels jail is great bully pulpit and you get a lot of publicity for being there. She said if I were arrested for something like that she would encourage me to stay in jail. On the other hand, I argued, if he is in jail, he certainly can’t go to Silwan, and if he gets out of jail, he can continue to fight the improper restraining order in court. Jail, after all, is not just filled with civil rights activists – if it were, what the heck, stay in jail and have some meaningful conversations, etc. The truth is jail is filled with some very bad people. I wouldn’t particularly want to stay in one. Despite the fact that this week is parshat Vayikra, when we read all about sacrifices, I don’t believe there is an obligation to offer one’s self up as a sacrifice, so I think it’s fine for Arik to keep fighting the fight from the outside.

I also had a sense that everyone on the other side – the cop, and sadly I have to describe the judge as on "the other side" – seemed more concerned with getting out of there since it was Friday (which is the weekend here) and they all wanted to be somewhere else, than they were concerned with justice. Fortunately, the cop didn’t get out of the building before Arik’s lawyer convinced Arik to sign; if the cop had gotten away, Arik probably would have been stuck in jail over Shabbat. However, it wasn’t all that simple — the cop said someone had to sign as a guarantor that Arik would not violate the order. I asked what it meant, he told me it means if Arik violates the agreement, I agree to pay 3,000 shekels (about $882 at current exchange rates). I readily signed – having no idea whether Arik intends to obey the agreement or not. My radical wife thinks he should go ahead and violate it and we should pay the 3,000 shekels!

I believe all Israelis should be concerned about Arik’s treatment. Regardless of how you feel about the underlying case, and whether or not the Elad Association should be allowed to harass Arabs living near a site that is archeologically interesting, he should have the right to protest, and his freedom of movement and association should not be impaired as long as he obeys the law. For the police to make stuff up to restrain him, and for the judge not to be willing to listen, is horribly wrong. Compounding the injustice, an important point is missing from the record. The judge asked "why haven’t the residents of Silwan filed a legal complaint?" and he was told that they are afraid to come to the court for free of being unfairly arrested for something else. That comment from Arik’s attorney did not end up in the "official minutes" of the hearing.

All in all, a sad morning, and a reminder of how far Israel has to go in securing civil rights and in becoming a truly democratic country.