How does God communicate with us?

That, in essence, was the question that a group of six Palestinian Muslims and seven Israeli Jews explored over two half-day sessions, Thursday and Friday of last week, at the Austrian Hospice in Jerusalem’s Old City.

We were participating in a joint retreat of the Interfaith Encounter Association, an Israeli organization, and the Palestinian Peace Society.

The Jews were mostly “Anglos,” native English speakers, all immigrants to Israel. Professionally the group included two people on the staff of IEA (both of whom have PhDs in topics related to Jewish mysticism!), a hazzan/artist, a teacher, a businessman/rabbi, etc. The Palestinians were all from Hebron or Tulkarm and included a professor, a government official, an accountant, a businessman. Very diverse group, although it was interesting to me who was missing – no “sabras,”—Israelis born in Israel—or Israeli Arabs.

Fr. Markus Stephan Bugnyar, the rector of the Austrian Hospice (which is NOT what the term “hospice” connotes in contemporary American English – it is, rather, a guesthouse for tourists!) presented the Christian view of revelation.

He pointed out how Jews believe the Torah was revealed to Moses, and the Koran was revealed to Muslims, but Christians have no concept similar to this. Jesus did not write any of the gospels himself, in the way that Moses is considered the author of the Torah, or Mohammed the author of the Koran. Further, unlike the Torah, where we see the refrain “God spoke to Moses saying” over and over, phrases like that aren’t used in the New Testament. God does not speak to Jesus – Jesus simply speaks. They take this as a further proof of the divinity of Jesus. When we started discussing the concept of the divinity of Jesus,” Jesus as God,” one of the Muslim participants got quite  upset and needed to be calmed down by his co-religionists.

An important ground rule was mentioned by the meeting organizers – we are not there to critique each other’s religions. We were there to hear what Christians have to say about their relationship with the Bible, what Muslims have to say about their relationship with Koran, etc. NOT what Christians think of the Koran or what Muslims think of the New Testament. Keeping that principle in mind is a good way to avoid acrimonious debate that does nothing to further respect for each other.

Rabbi Joel Zeff, Rosh Yeshiva of Yeshivat Hamivtar,  presented the Jewish perspective. He drew heavily on Jewish mysticism. When he started talking about studying Torah as making love with God, I admit I was a little skeptical as I’m not sure how non-mystics would react to such a concept, and it might be difficult to understand without a lot of background discussion on the concept of “mystical union.” I wonder if the translator presented the notion in such physical terms, or let it slide as a kind of platonic thing. Personally, I find the idea of God having done tzimtzum, a contraction, and putting “essence of God” into the Torah a more compelling vision – but in any event, we see Torah as our vehicle for connecting with God.

Dr. Taleb Al-Harithi, coordinator of the Palestinian Peace Society presented the Muslim perspective. He talked about how the archangel Gabriel served as an intermediary between God and Mohammed, but just as for the Jews, their holy scripture is believed to contain the word of God. He also spoke about how the Muslims also consider the Torah and the New Testament revelations of the Divine Word. Interestingly he mentioned that Muslims believe in the immaculate conception, the concept that Mary was made pregnant without a physical father, but they don’t take that as meaning Jesus is a physical incarnation of God – they just believe that it was a miraculous pregnancy. They revere the Jewish prophets and Jesus as prophets, some of whom, like Moses, rise to the highest rank of “messenger of God.”

As is often the case when I’ve been involved in gatherings of the “Abrahamic faiths” we discovered that Judaism and Islam are very close to each other theologically – Christianity is sort of the “odd man out” with a lot of concepts that would appear to be rooted in Hellenistic thought, not Jewish thought.

One of the participants asked whether it is better that people be religious, or not? In other words, is religion a force for good, or a force for evil?

I shared the idea that in each of our traditions we can find teachings of love, and teachings of religion can be a powerful force for good and peace. If we focus on the “Torah of hate,” religion can be a powerful force for racism and violence. I think this is why the Baal Shem Tov (the Besht) taught that one has to do teshuva BEFORE studying Torah – for Torah is an amplifier that can make good people better, or, God forbid, bad people worse.

This is a message I explored in greater length in a d’var Torah I gave five years ago for parshat Vayishlach, which you can read here. Reading that post now, I recognize it as having been written at a time when there were a lot of terrorist attacks, and I was feeling that pain. Then my conclusion was “As long as the good Muslims of the world allow fanatics and fundamentalists to murder innocent people, contrary to the teachings of their own religion, they will be held accountable for the sins of those they didn’t stop.”

The same, of course, is equally for true for Jews. To the extent we allow settlers and the government to abuse innocent Palestianians – and there are many innocent Palestinians, they are not all terrorists! – we too will be held accountable.

I hope that in future gatherings we will feel comfortable enough with each other to take a look at the “troubling texts” we each have in our traditions, and talk about ways we can defuse them within a religious context. I don’t think we can simply ignore the unpleasant verses in the Koran or the Torah. 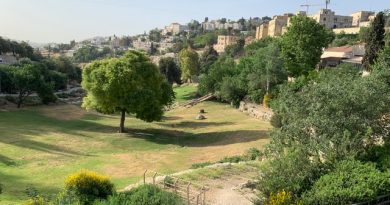 One thought on “Receipt of the Divine Word”