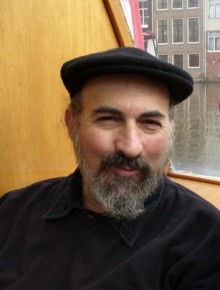 Psalm 116 tells us “yakar b’einei Hashem hamavta l’chasidav,” “Precious in the sight of the Lord is the death of his pious ones.”

I admit to be very troubled by this Psalm. Why should the loss of a pious man to this world be precious to God? God may get to enjoy the pious man’s company on a more intimate basis, but how pious can a person be in heaven where you can’t do any mitzvot?

When I met Ron back in 1976, the fact that we were both Jewish was very incidental and strictly coincidental. I certainly would not have predicted that either one of us would one day be considered “pious.” Neither of us had any real connection to Jewish life, the Jewish community, or the Jewish tradition at that point in our lives. Ron had a Kung Fu studio on Capitol Hill, and I was teaching a Tae Kwon Do class in the neighborhood. We became buddies – Ron introduced me to sushi – and colleagues. Ron got me a job working with him as a bouncer at a gay disco. His sales pitch was very straightforward – they pay us double what they pay big bruiser bouncers, since they preferred people who looked “normal,” and all we had to do was stand around and drink grapefruit juice until 4am.

Ron and I both had lengthy periods when we sought religion everywhere EXCEPT in Judaism. Everyone knows the idea of running around all over the world, and then falling in love with the girl next door. There is a Chasidic story that illustrates the journey Ron and I both went on – about a man from the boonies in Poland who goes to Warsaw seeking a treasure he saw in a dream, only to discover it was hidden in his own home. I don’t know if he shared it with you, but I found the story of how Ron came to return to Judaism a fascinating tale.

One night about ten years ago, Ron and I went out for sushi and sake, and he told me how performing a particularly grueling Native American ritual helped lead him back to Judaism. He participated in some sun dance or something like that, which involved fasting for four days and nights, no food or water. Towards the end of the ceremony, he had a vision where he saw a line of grandfather types welcoming the people going through the ceremony, and he realized that none of them was HIS grandfather; they were all obviously Native Americans. He decided he should look in places where he would find his grandfathers, in the Judaism.

Ron’s connection to Native Americans was very deep; he was at Wounded Knee, and was injured. He was made a “relative” of the Lakota Nation, and is buried at Crow Dog’s Paradise on the Rosebud Indian Reservation in South Dakota.

So although it would be a while yet before he reconnected with Judaism, in those days when I first met Ron, over 30 years ago, an astute observer could have picked up on Ron’s “piety,” and righteousness. When I think of the way Ron was pious, I think of the way Abraham was pious – not quiet, not demure, but rather an iconoclast. Just as Abraham smashed his father’s idols, Ron was quite ready to smash other people’s idols, assumptions, and expectations. Some people are pious in their observance of the ritual commandments – however you can be equally pious in the observance of the commandments that are between people, especially the commandment to love your neighbor as yourself.

R. Nachman of Breslav taught that when we say in our prayers “m’lo col ha’aretz k’vodo,” the whole world is full of God’s glory, it is meant quite literally – there is no place that is devoid of God’s presence. In fact if you want to do some good elevating spirits that have fallen to a low level, you have to go down to where they are.

All of which can make me feel better about the kind of bars Ron and I used to visit back then! But here’s where an astute observer could have picked up on Ron’s righteousness – even though Ron and I occasionally visited some pretty disreputable places, he would bring cheer to the people working there – and he was much more interested in the people working than in the patrons – doing things like magic tricks. Although he was always careful to tell people he did illusions, not tricks. And his generosity of spirit was obvious in the way he was always ready to reach out to people who were in need, people who may have been battered by the vicissitudes of life.

Ron was always ready to make financial sacrifices to hop on a plane to help others who were worse off than he was. Guatemala, Thailand, makes no difference, no location was too remote, no people living in conditions too primitive, he was ready to go make a difference helping when he could, regardless of the personal cost and loss of income. He was driven to make a difference. Figure out the finances later.

The Talmud teaches that he who saves a life is as if he saved a world. Ron’s dedication to healing and helping has surely earned him a worthy place in olam haba, the world to come.

The Psalm I quoted at the start, Psalm 116, I suggest could be translated differently – “yakar” can mean not only precious, the usual translation in books of psalms, but it can mean expensive. Instead of reading the verse “Precious in the sight of the Lord is the death of his pious ones,” I suggest we read it as saying the loss of His righteous ones is expensive in the sight of the Lord – it’s a heavy cost, even to God, to lose a righteous soul from the world where it can do good.

May Ron’s memory be not just a blessing – may it be an inspiration to us, a reminder to stretch ourselves to do God’s work by helping others.