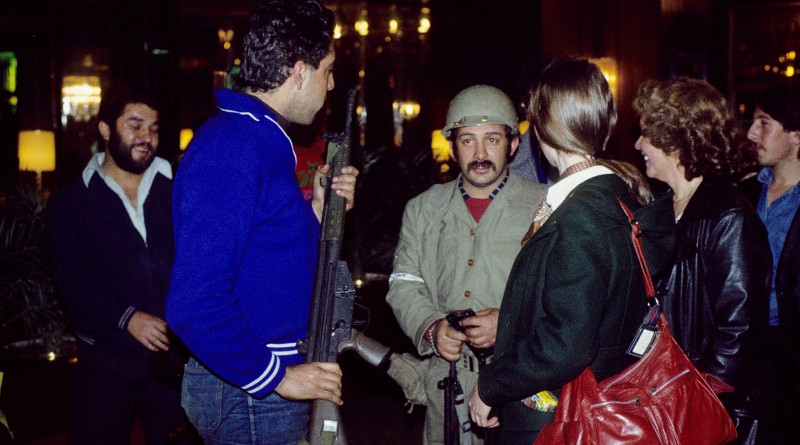 Today, February 16, is a day that I celebrate my “Personal Purim.”

Purim is, of course, Judaism’s “spring time drinking holiday” when we celebrate deliverance from the hands of anti-Semites in Persia.

The Jewish tradition also allows people or communities to celebrate a “personal Purim” to commemorate days when they were saved from disaster.  There are Jewish communities in Germany, for example, that continue observe Purims from times when they were spared from a pogrom.

30 years ago today I was evacuated from Iran.  I lived in Tehran during the Iranian Revolution of 1978-1979, employed as technical instructor teaching the Iranians how to do what I had done when I served in the US Army (I hope they forgot everything I taught them!).  It was a fascinating t 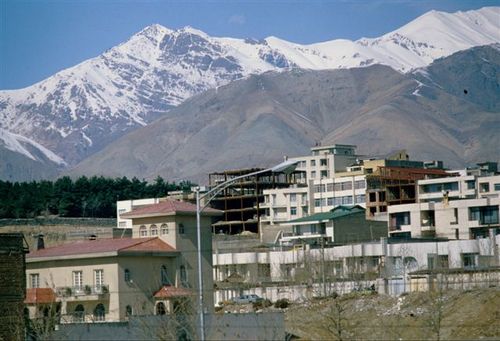 ime, and a fascinating country.   The picture at the right is the view from our kitchen window in Tehran; the day before the Revolution really took off, we went skiing.  I really enjoyed living there, at least until the shooting started.

What follows is the story of that last day in Iran, 30 years ago.

Feb 10, Tehran went crazy — the Army was fighting the Air Force, crazy people filled the streets.  We knew it was going to be a bad time.  The next day we got word that we were going to be leaving the country, but they couldn’t stay when.  Management told us to “keep a low profile.”  We’d been keeping such a low profile for months already I think I looked like Quasimodo.

Feb 14th, they called in the morning and told us (my then wife Cheryl and I) to be ready to be picked up in a few hours; we were going to be waiting for the airport to open all together in the Intercontinental Hotel in Tehran.  For about a week before we were evacuated, the airport was closed: only one plane came in or out, and that was a private charter come to pick up the body of an LA Times reporter who got killed.

Pan Am was one of the other contractors on our program with the Iranian air force.  Thanks to that, and the classified nature of the work we were doing,  we were to receive the honor of being the first official evacuation flight  to leave Tehran.  The plane, with an all volunteer crew, had been standing by in Dubai for several days waiting for the airport to open.

We were awakened by a call at about 4:30 am telling us to get up, get ready, and be down in the lobby ready to go by 5:30–we were going home.

The scene down in the lobby was a zoo.  We were trying to sneak out without  the press knowing, but there were members of the press corps hanging around the lobby around the clock, so they were able to figure out something was going on pretty quickly.  Then the press was falling all over themselves trying to get a seat on our plane (I think it was a 707 and held 180 people).  Cheryl, Rocky, and I were hanging around the lobby waiting to leave.  Rocky was our cat.  When Rocky first wandered into our lives, we thought it was a she, so we named the cat Roxanne after the princess, Roxy for short.  A few weeks later, it became evident that “Roxy” was really a “Rocky,” so that became his new name.  Rocky had to stay in his cage for the most part, and wasn’t happy about it.  Ivan Fedder, our boss, shook his head every time he saw the cat–he wasn’t keen on the idea of taking a jube cat out of Iran, but Cheryl had made a valiant plea for him, so he was willing to let us take him as long as the cat didn’t take up a seat that could go to a human.

It was about 6:45am before we finally pulled away from the hotel in a convoy.  In the lead was a car load of Khomeini’s Revolutionary Guards, followed by about 4 or 5 mini-buses.  We pulled out in the dark, and headed for the airport.  The lead car was a Peykan, a British Hillman built in Iran.  Sort of like a Toyota mid-size car, but very poorly built.  The mini-buses each seated about a dozen people–sort of in between a full size van and a small bus.  We drove through the deserted streets of Tehran; it was almost eerily quiet.  We drove through commercial and residential sections, most of the building 4-6 stories tall, very boring squares of concrete.  Except for the palaces, architecture was not one of Tehran’s claims to fame.

One of the Revolutionary Guards in the lead car was riding on the trunk, on the outside of the car.  The car hit a little dip, and his gun went off, shooting out the back window of the car.  We started laughing uproariously at this very typical example of the ineptness of the Revolutionary Guards, and then we realized it probably wasn’t a good idea to be laughing at a possibly angry unfriendly person with a gun. Our luggage had ended up on a different mini-bus than the one we were on. When we got to the airport, the mini-bus with our luggage was nowhere in sight.  I found the head Revolutionary Guard, a guy named Ali, and asked where was the mini-bus with our luggage.  He said “one of the buses is missing?  Aww, [expletive deleted]!”  Which struck me as amusing at the time.

A few minutes later the missing bus pulled up.  Turned out one of the female passengers absolutely had to go to the bathroom, RIGHT NOW, so they stopped the bus and let her relieve herself in a nearby alley.

The airport had a large entry hall, and we were all in there milling around while the Revolutionary Guard tried to get themselves organized.  Since we were the first flight out under the new regime, everything was new to them.  They knew they were supposed to stamp passports, but they didn’t seem to be clear on why, or with what, so we had to wait while they figured out the passport stamping routine.

Originally we thought we were going to Turkey.  It turned out they changed plans, and the plane was going first to Frankfurt, and then to New York.  We were asked where we wanted to go.  Some of our friends were getting off in Frankfurt to take a few days R&R in Europe on the way home.  We were tired, and stressed, and said, heck with it, let’s just get home, and had our luggage tagged for New York.

Once on the plane, we had more delays.  We were sitting on the ramp a long time.  The Revolutionary Guard’s were looking for someone, a Pakistani employee that they didn’t want us to take with us, they wanted only Americans on the plane.  I don’t remember exactly, but I think we managed to get the poor guy out.

While we were sitting at the gate, once we were all on board and situated, one the RGs came on board and stood at the front of the plane and gave a little speech:  “now there is trouble in my country, and you must leave, but soon I hope you can come back.”  We were actually touched by this sentiment and applauded.  Thirty years later, and I still haven’t gone back. 🙁

Finally, we pulled away from the gate and headed for the runway.  The mood on the plane was a little somber; none of this had turned out the way any of us had hoped.  Most of us liked Iran and were saddened by the turmoil and problems.

After the plane took off, there was only a muted applause; we were a little nervous because we knew there were terrorists with hand held surface to air missiles, and we didn’t really feel safe until we had some altitude.  When the pilot announced we had crossed into Turkish airspace, the cabin went wild. The flight to Frankfurt was one big party, and the booze was on Pan Am.  We sang “Ayatollah’s coming to town” for a reporter from ABC.  It goes:

At one point Rocky was comfortably curled up on a blanket on a vacant seat.  Ivan came by and saw it and started shaking his head.

We had such a good time drinking and carrying on with our friends on the flight, so we decided to change our plans and go with our friends Charlie and Dave and JoAnn to Amsterdam.  Of course, our luggage was going to New York, but we figured “so what?.”

We got off the plane in Frankfurt, and there were TV cameras, military and civilian representatives from the US Embassy, even the American Red Cross; a great commotion all around.  I think the TV crews were expecting a group of shell shocked refugees from strife-torn Iran; instead they saw a bunch of jolly drunks rolling off the plane.  We didn’t want to see the Red Cross or embassy people; the only person we wanted to see was the company controller, who met us with a bag containing $1000 emergency money for each of us.  We arrived in the midst of the worst blizzard to hit Europe in about ten years, and all our luggage was on it’s way to New York.

As we went through German customs, the customs agent pointed to our cat carrier and said “was is das?  is das einer kat?  do you have ze papers for ze kat?”  Fortunately, we did–Cheryl had borrowed a chador and gone out with our neighbor in the middle of the Revolution to get the papers.  I thought she was crazy.

Cheryl and I bought some emergency clothes to hold us over for a few days in Amsterdam.  Cheryl urgently needed to do something about her jacket; in all the excitement, Rocky had crapped all over it, and it was a mess. . .

We spent the night at the Frankfurt Airport Sheraton, and the next day we headed off to Amsterdam for a few days of relaxation.

We had a pleasant time in Amsterdam, eating and going to museums, despite the horrible cold and snowy weather.  We arrived during their winter carnival.  At one point some firecrackers went off nearby.  I dove into the nearest doorway, and Cheryl told me “it’s OK, there’s no one shooting at you here.”  We laughed at my automatic response, and headed for a bar.

Our travel adventures weren’t quite over yet; as we were flying toward New York, all the airports on the east coast were shut down by a blizzard, and we had to divert to Toronto, where we spent another night at an airport hotel before finally reaching New York the next day.

My experiences in Iran give me a somewhat different perspective on the current crisis.  I’m perhaps not as worried as a lot of other Israelis.  I don’t think the nut case Ahmadinajad speaks for most Iranians.  Ira

nians were Persian long before they were Muslim (think Omar Khayyam, “a loaf of bread, a jug of wine, and thou”) and the Persian influence is still very significant.  Most Iranians –certainly those living in the urban elite — are far more interested in living a materially comfortable life than they are interested in helping the poor beleagured Palestinians, or getting their nose bloodied in another vicious war like the one against Iraq in the 80s.  I’m moderately hopeful that regime change in Iran will happen peacefully from within.

Reb Barry — pictured at left some 30 years ago, with a lot more hair… 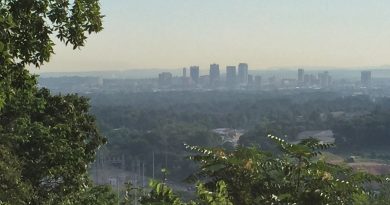