The play is very short.  You can read the whole thing easily in five minutes.  Click here to read it. Or click here to see it performed by Jennie Stoller.

After reading (or watching) it, come back and comment.  Scroll down to see my comments, but I suggest you read it first and form your own opinion before reading my comments….

I found the play very powerful — and NOT anti-Semitic.  It's strong — but the things she says that are offensive are things you can read in the paper as quotes from various Israelis.  She's not making stuff up — sadly we do have people who say things like what you read in the last section.

Clearly she starts out very sympathetic to the Jews as she describes the fears and horrors of pogroms and the Holocaust.  She chronicles how opinions change when you're under attack.  Yes, she makes it a bit of a caricature, but I can tell you having lived in Israel during the start of the Second Intifada that my politics took a definite rightward shift and my heart was somewhat hardened in the wake of the many innocent people killed by terrorists.  It's sad; but it happens.

The play has been attacked on the basis that it is not "balanced."  Or that "not all Israeli are like that."  Well, duh!!  I'm an Israeli and I'm not like that.  But the play is art.  The goal of art is not to be "balanced."  Art does not claim to represent the average — art shows people who are exceptional.  That's what makes it interesting.  A play that was balanced and presented the exact average would be as boring as watching paint dry.  There is nothing balanced or representative about Hamlet, either.

You can read an interesting blog entry with Churchill's comments here.

The appropriate response if you think the play is not balanced is to write a different play of your own that presents your view.  Deb Margolin has done just that, in a response play called "Seven Palestinian Children."  With the author's permission, the script is posted here.

My wife Lauri and I are thinking of staging a reading of the play — probably both plays together.

Josh Ford wrote an interesting piece "Why Do a Reading of Caryl Churchill’s “Seven Jewish Children” at a Jewish Theater?"  Click on the title to read it.

If you'd be interested in participating in, or seeing, a production of Seven Jewish Children: A Play for Gaza" in Jerusalem, let me know. 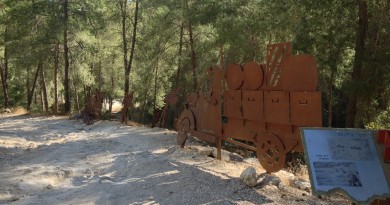 5 thoughts on “Decide for yourself”