Every time a I write a post that is critical of Israel — like my most recent one on “Where were the rabbis for human rights in Egypt” — I have one or two people “unsubscribe” from my mailing list.  As often as I’m critical of Israel, it’s a wonder I have any subscribers left! 🙂

But those who leave in a huff after I write something critical of Israel I think don’t appreciate that any criticism I have of Israel is “criticism of love.”

Today is Yom HaShoah, Holocaust Remembrance Day.  I just came back from the synagogue where we recited Megillat HaShoah, which is a very powerful telling of the story of the Holocaust in a religious form.  There is no starker reminder of the need for Israel than Yom HaShoah.  6 million Jews, 1.5 million of them children, killed for no reason other than the fact that they were Jewish.

The Talmud teaches that someone who kills a person, it is as if he destroyed an entire world — for he kills not only that person, but whoever would have been descended from that person.  In an article in Haaretz, demographer Sergio Della Pergola estimates that if it weren’t for the Holocaust there would 32 million Jews in the world today, instead of 13 million.

Jews in America rightly feel that America is such a safe and comfortable place for Jews, they don’t need to give much thought to Israel.  It seems unbelievable that things could ever get bad for Jews in America.  I’m sure the German WWI veterans who considered themselves more German than Jewish, who were completely secular and part of German society, thought the same thing.  I’m not saying there is much chance that terrible things will happen in America any time soon — because I don’t believe they will — but I also believe that given the sad history of anti-Semitism, we should never say never.  And Israel is needed not just for the Jews of America, but for the Jews from all the other places in the world. How long until Ahmadinajad makes life really uncomfortable for the 25,000 Jews still living in Iran? Where would they go, if not to Israel?

As I stood in the synagogue tonight with my arm around one of my young daughters, sayng Kaddish for my cousins from Belgium who perished in the Shoah — I had tears in my eyes as the only possible response to the insanity of a world gone mad, not that long ago, in my parents’ lifetime.

I didn’t turn my life upside down and move to Israel just to make sure there is an insurance policy for Iranian Jews.  The significance of Israel is much more than that — it’s our opportunity to create the kind of society God commands us to create.  A society with respect, love, honor, peace, all the good values we learn from the Torah.  A society that would make God proud of us.  So if I occasionally criticize Israel, don’t misunderstand where it’s coming from — the criticism comes from a place of the deepest love and commitment to this amazing enterprise of Jews having a country of their own after 2,000 years of wandering in the political wilderness.

We appropriately closed our service with “Ani Maamin” — “I believe, with perfect faith, even though he may tarry, in the coming of the Messiah.”  And I also believe we have a lot of work to do to prepare the way for that wonderful period knowns as “yemot hamashiach,” the days of the Messiah, when all will live in peace and harmony, and as the prophet Isaiah said, “nation will not lift up sword against nation.” 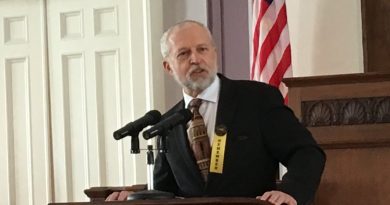