What’s the reward for doing a mitzvah (commandment)?

Some people think you do mitzvot for rewards in this world – follow the rules and God will do nice things for you. Which is sort of implied in the Shema, which we recite a twice a day. All that stuff about if we disobey the commandments the skies will be shut and we won’t have anything to eat. However, we often see righteous people suffering, and vice verse. All the tzaddikim who perished in the Holocaust show us that the rewards for doing mitzvot are not in this world, at least not in a physical sense.

Others think you do mitzvot for rewards in the next world. Be good here, get into heaven. But is that really much of a motivator? Who among us has seen heaven? How do we know? Most people can’t put off instant gratification for a day, let alone a lifetime.

If neither of those really work, what IS the reward for obeying the commandments?

Regarding the above verse which appears at the beginning of this week’s Torah reading, Rashi says “this is to tell you of the praise of Aaron: he did not digress from the mitzvah,” he was prompt and particular. Aaron loved doing mitzvot – and Pirke Avot, “The Teachings of the Fathers” tells us that the reward for doing a mitzvah is you get the opportunity to do another mitzvah. A mitzvah is its own reward.

What kind of a reward is that?

Maor Einayim (the Chernobyler rebbe), one of the early Chasidic rebbes, says that the joy of doing a mitzvah is that it connects us with God. And we can have no greater joy than to be connected with God. The word “mitzvah” itself alludes to the connection between the commandments and God.

The kabbahlists talk of a “substitution cipher” that encodes certain information in the Bible. One of those substitution ciphers is called “at-bash” because the first letter – alef – become the last letter, tav. The second letter beit, becomes the second to last letter, shin, and so on. The first two letters of “mitzvah” – mem and tzadi – become yud and heh, the first two letters of God’s name. The second two letters in mitzvah – vuv and heh – combine with yud and heh to spell out the tetragrammaton, the sacred name of God that Jews never pronounce.

But what’s the significance of the two hidden letters? Maor Einayim says it is an allusion to God’s presence in the commandments, to the way we can connect to God through doing the commandments. But they are hidden – and the hiddenness is our “ikavvanah,” our intentions when we do a mitzvah. The action is the “body,” and having the right intent is like the “soul.” He says that if we do a mitzvah without kavannah, without intent – if we do it on autopilot – it’s like talking to a dead body without a soul. It won’t help connect you with God, and you are disconnected from the reward for doing the mitzvah, which is the joy of being closer to God.

In this commentary Maor Einayim does not talk about what kind of kavannah you should have. But Rebbe Nachman of Breslov teaches that the right kavannah is to be joyful. That when we feel joy from doing a mitzvah – then getting another mitzvah to do really does feel like a “reward.” Rebbe Nachman teaches that we should remember to be happy about the mitzvot we have done, and not worry so much about the ones we didn’t do. Getting depressed over our shortcomings is a barrier to making any spiritual progress at all – you won’t even fix the shortcomings, you’ll just be paralyzed. Hence Rebbe Nachman recommends that we focus on the positive, take joy in whatever good things we have done, and work on fixing ourselves up coming from the perspective that we are basically good, and have much to be happy about.

Given that Shabbat is almost here, that is certainly something to be happy about…my favorite holiday! J 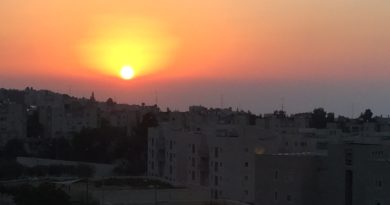 Bahaalotcha 5780 – The Light in the Crisis