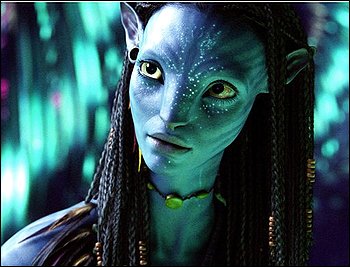 WARNING: THIS POST CONTAINS "PLOT SPOILERS" FOR THE MOVIE AVATAR.

In the course of the discussion, I will of necessity give away some plot points in the movie.  If you have not seen the movie, and don't want learn some of what happens, DON'T click on the "continue reading" link.

On the other hand, knowing the plot ahead of time will not seriously detract from your enjoyment of the movie.  The visual effects are TRULY stunning, breathtaking.  As Lauri said when we left the theater, you can see every shekel of the $250 million James Cameron spent to make the movie.

There have been numerous articles recently about the "White Messiah" theme in Avatar, and how similar it is to other movies, like "A Man Called Horse," "Dances with Wolves," or the "Last Samurai."  See David Brooks' piece in the NY Times here.

I am, however, surprised that a quick internet search did not reveal the Biblical Messianic — even blatantly Cristological — plot and symbology in the movie.  So here is my take:

Obviously, the "Navi" are the Jews — Navi means "prophet" in Hebrew!  The Navi — who might seem to be pagan — are actually the spiritual worshipers of God, who they call "eywa" which sounds quite similar to "yahweh" a common mispronunciation of God's unpronounceable name.  The "American" space-faring Marines are the pagan Romans, an overwhlemingly superior military force with no respect for the local gods or customs.

There's still more.  Before he realizes he is the Messiah, there is a sign from heaven, in the form of these cute floating lights that look like stars (Bethlehem, anyone?).

There is even a nod to the tradition of Moshiach ben Yosef preceding Moshiach ben David, and failing: Grace tries to do the trick of transfering her soul from her human body to her navi body, but she fails…the true Messiah succeeds.

The Biblical tradition holds that the Messiah will deliver the chosen people from the yoke of foreign domination, against the odds, which of course the hero does.  It is noted that this is a common movie theme — the more powerful force winning after all, does not make for a very interesting movie — but it is another element that is present.

And last but not least, there is the Messiah resurrected from the dead.  Willingly sacrificing his life to be reborn, transformed.

Despite the overly familiar plot — no cliche was overlooked in putting together the script for this movie — it's worth seeing.  The movie is nearly three hours of "eye candy" and in classic American Hollywood fashion, the good guys win in the end, so everyone can leave the theater feeling good.

Unless you are a capitalist working in the extractive industries.  In which case, you'll leave the theater feeling guilty as hell!  Or at least the director/screenwriter hopes you will!

PS: the picture is not the Messiah, it's his girlfriend…and I'm also reminded of one of my favorite teachings about the Messiah, from one of my professors in rab school: The Messiah always has to be out in the future, because once the Messiah comes, the movie's over! 🙂

3 thoughts on “Avatar the Messiah”