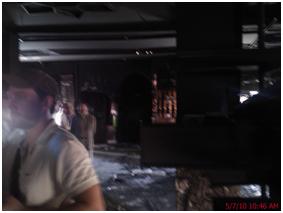 Earlier this week there was a fire at a mosque in the West Bank town of Luban al Sharqiya, not far from Nablus.

Earlier today I took a tour of the mosque and participated in a meeting with residents of the town and Israelis and Palestinians associated with Combatants for Peace.

Right after the fire, Palestinian authorities blamed it on settlers. Some claimed it was an electrical fire. David Brinn, in the Jerusalem Post, accused the world of too quickly accepting the claim that it was the work of settlers. In the meanwhile, Haaretz has reported that Israeli authorities now say arson likely was the cause.

I'm not a specialist in fires or arson, but I can tell you what I saw. The fire was clearly VERY 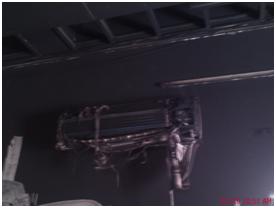 intense: the inside of the mosque was gutted. Metal support beams that held up the drop ceiling had partially melted and were sagging. The mosque had installed eight new air conditioners about a week before the fire. They were all completely destroyed. Admittedly aluminum and plastic melt at lower temperatures than steel; in any event, the air conditioners looked like something out of a Dali painting, or Munch's "The Scream."

The reason the Palestinians were quick to conclude it was arson is because when they were able to get into the mosque they saw a bunch of Korans had been taken off the shelf, and set on the floor in a semi-circle with shoes on top of them. As is well known from an incident involving former US President George W Bush, shoes are considered very disrespectful in the Arab world. This is not an act that a loca 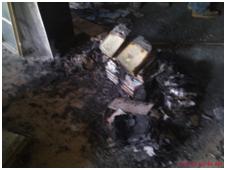 l would have done.

In addition to the shoes, there is another reason to doubt an electrical fire. Every night when the mosque is closed the master electrical switch gets turned off. The master switch was melted into the "off" position, suggesting, in line with their usual practice, it was off before the fire broke out. If the master electrical switch is off, it's unlikely a short would start a fire. And, of course, some of the radical settlers have been engaging in acts of violence to extract a "price tag" for any attempts to stop their plans to grow settlements in the West Bank. So it's not like it would be completely impossible to believe that radical settlers were behind the act.

After the tour of the destroyed mosque, about 20 Israelis joined a meeting with about 30 Palestinians. I was there as the representative of Rabbis for Human Rights. One of the local leaders said that shortly after the fire, some leaders from the anti-Zionist ultra-Orthodox group Naturei Karta offered to send up to 500 volunteers to help rebuild the mosque. PA President Mahmoud Abbas has pledged the funds to restore the mosque; estimates are it will take NIS 500,000. Work is

to start tonight, and they hope to be able to use the mosque in a week. The first thing they have to do is clean things up enough for engineers to determine the extent of structural damage.

Some of the local leaders spoke about their appreciation for the support of the Israelis; representatives from Combatants for Peace spoke about the need for us to work together for peace. A "free form" version of what I said follows:

I have friends in America who ask whether religion is a good thing. They say that there has been so much violence in the name of religion, so many wars, they ask whether the world would be better off without religion.

Those of us who are religious, know that the world is also better off in many ways because of religion. As one of the other speakers said, religion teaches us to honor other people, and the Jewish religion teaches the same thing. People who would harm innocent people or who would destroy a house of worship are not following any true religion. No religion teaches to do these things. The Jewish tradition teaches that we are all descended from Adam so that no one can claim to come from a more illustrious family than anyone else. We all have the same ancestors. And especially for us, the children of Abraham, this is especially true. Abraham – Ibrahim – is the father of us all. And anyone who is a parent knows that there is nothing a parent wants more than for his children to get along with each other. 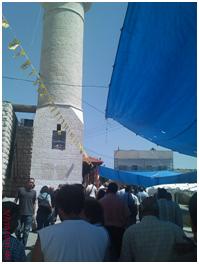 I completely believe that if we could somehow get the politicians out of the picture and put it to a vote directly of the people – Palestinian and Israeli – we would have peace immediately (interestingly enough, just at THIS EXACT MOMENT several Palestinian politicians entered the room! Proof again that God has a sense of humor, or at least irony).

Our job, Palestinians and Israelis, is to work to convince our respective governments to do the things they need to do to make peace a reality, to face the difficult decisions and challenges to their authority. May we see peace in the land bimheira v'yameinu, quickly and in our days, amen.

What's happening in Sheikh Jarrah is not fair

6 thoughts on “Arson in the name of God”