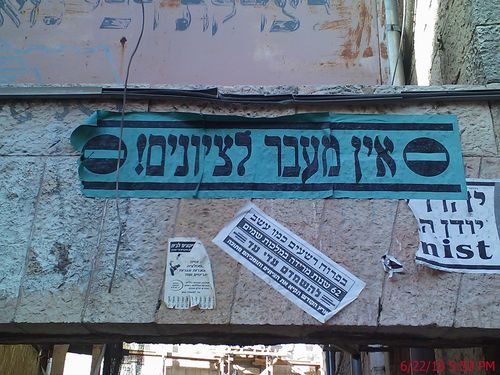 "No Entry for Zionists." Where do you think you would be likely to see a sign like that?

If I said in Jerusalem, you'd probably assume I meant one of those Arab villages.

I certainly know I was surprised to be walking in Mea Shearim, in the heart of the Jewish section of West Jerusalem – in the heart of a very religious Jewish neighborhood – and to see such a sign.

I'm not easily shocked, but I was shocked. And somewhat shaken. Yes, I have always known there were anti-Zionist groups like the Neturei Karta, that believe Zionism is slowing the coming of the Messiah. Groups that believe it would be better to live under Arab rule. Rabbis who have served on Yasser Arafat's cabinet as his minister for Jewish Affairs. And I know that the charedi ("ultra-Orthodox") in general have been getting more restive, more outspoken, more violent. Admittedly it's been a couple of years since I last went to Mea Shearim – I generally only go there to buy obscure religious books, it's not a place I generally like to take tourists. Last time I was there I didn't see so much visible antipathy toward Zionism. I'm sure the antipathy was there, but they were more quiet about it.

What struck me is what a "generation of the desert" mentality they have. A "slave" mentality. A "galut" (exile) mentality.

The theology behind the anti-Zionists comes from a passage in the Talmud at the end of tractate Ketubot known as the "three oaths." Based on a midrashic interpretation of an obscure three fold repetition in Song of Songs of a phrase "I adjure you, o daughters of Jerusalem, not to arouse love before it's time" they believe we should do nothing to "force God's hand" so to speak. We should sit and pray, and when God is ready, God will send the Messiah, the Third Temple will dramatically fall in a fiery cloud from the sky, sacrifices will again be offered in that new Temple, and Israel will be ruled by a king descended from David, aided by a Supreme Court of rabbis (ultra-Orthodox ones, of course!).

That midrash came in the wake of the destruction of the Temple and the crushing of the Bar Kochba revolt. Jews had learned their lesson: keep your place, don't take on Rome. For the better part of 2,000 years, following those instructions led to Jews living in exile, often in horrible conditions, often facing pogroms. When God comes along and performs a miracle for us, and brings us back to the land of Israel, the modern day anti-Zionists turn their back on it, and because it wasn't done the way they picture it, they reject it. The idea that God would accomplish His miracles through human agents seems impossible for them to grasp.

It is good to honor "minhag avoteinu," the customs of our ancestors. But they go too far. They are like the slaves that God brought out into the desert, on the path to the promised land, who complained about the leadership of Moses and Aaron. God did miracles for them, and all they wanted was to go back to Egypt. We are taught that the generation that died in the desert had to die out in the desert because they had a "slave mentality," they weren't psychologically suited for the challenges that go with establishing a sovereign nation in Eretz Yisrael. The slave generation basically said, "our ancestors were slaves in Egypt, it's good enough for us to be slaves in Egypt."

Likewise, the anti-Zionists in Mea Shearim are looking backwards. They fail to see the miracles that God has wrought on their behalf. It doesn't match their preconceived notions, so they think it is "treif" (not kosher).

Is my vision – which was Herzl's vision – the odd one here? I'm a Zionist, so I didn't enter that passageway. Yet I'm a Zionist who wants to see Israel live up to her role as a light to the nations – an Israel that is a beacon of hope, of justice, of mercy, not just toward Jews but to all her residents and citizens.

Just like those anti-Zionist residents of Mea Shearim, I pray fervently for the coming of the Messiah. Yet my vision of what that day will be like is as different from their vision as it is from a Christian vision. With all these different visions of what the days of the Messiah will look like, how will we ever recognize them when they come?

The State of the State