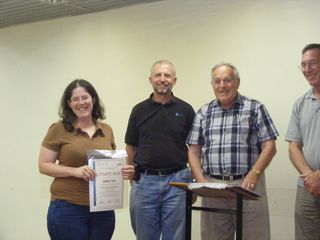 There is no shortage of human rights related stuff in Israel to blog about these days: protests that turned violent in Sheikh Jarrah, the mayor of Jerusalem's "tone deaf" plan to "help" the residents of Silwan regardless of how they feel about the help, Gilad Shalit still captive in Gaza.

There is always something "exciting" going on in the human rights scene in Israel, and our executive director, Rabbi Arik Ascherman is often in the middle of it, getting arrested, standing in front of bulldozers, etc.

Which is why much of the other very important work that Rabbis for Human Rights (RHR) does often goes unnoticed by the public at large.  It's not so dramatic.

Last week I had the opportunity to attend the end of year ceremony for the graduates of this year's Human Rights Beit Midrash at Hebrew University in Jerusalem — a joint project of RHR and Hillel.

Over the course of the last year, the graduates each spent 150 hours learning some of the fundamental sources for human rights in the Jewish tradition.  Major topics included: "The Image of God," "Tzedaka (charity or righteousness) and Justice," "Equality" (including gay rights), "The relationship between the citizen and the resident alien."  Additionally, as a group, the students contributed 1200 hours of community service with human rights NGOs.

It may not make headlines, but RHR's educational work is incredibly important.  Many liberal secular people have been put off towards religion because they believe religion is a reactionary force concerned with the Jews, not concerned with the world.  By putting human rights issues into a Jewish context — and by educating them on the important things the Torah has to say on the most contemporary of issues — we are helping to create a generation of future leaders in Israel that will appreciate the wisdom in Judaism. We are helping create future activists who will work for "tikun olam," the repair of the world.

I was delighted to see how they put volunteer work together with learning: they were living out the teaching from the Talmud about the debate in R. Tarfon's attic: "Which is greater," they asked, "study or action?"  R. Tarfon said "action."  R. Akiva countered, "study, for it leads to action." The collected rabbis agreed with R. Akiva that study is greater because it leads to action.  This isn't just a beit midrash where the students argue obscure points of halacha; it's a beit midrash where study leads to action.  It was a privilege to be a part of their graduation.

What’s Bibi so mad about?

Torah shall go forth from (to?) Zion

Redeeming captives — at what price?