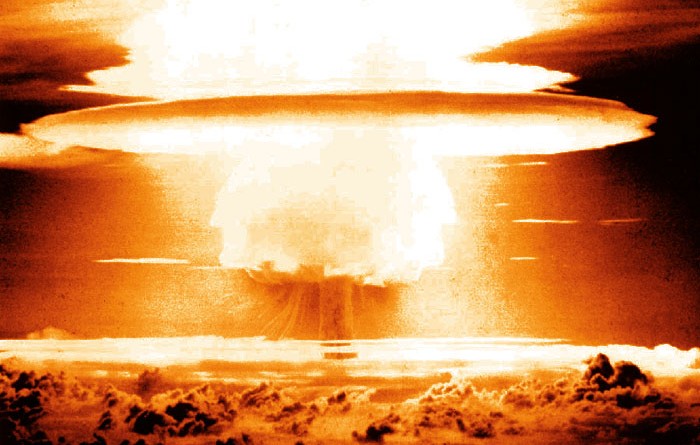 My late stepfather, M. Leonard Holder, died of cancer caused by exposure to radiation at the H-Bomb test at Bikini Atoll on March 1, 1954.

He died over a decade ago, more than 40 years after that fateful day.  He died of a type of cancer known to be associated with exposure to high levels of radiation.  Leonard didn’t like doctors or hospitals; when he finally did go to the doctor – too late to be saved – the doctors at the VA hospital were surprised he was still alive.

I never spoke to him about that time while he was alive.  I don’t know why not; he was a pilot, I’m a pilot, when I heard he had contracted cancer, I also heard about his flying around the explosion site, but I never asked him to tell the story.  I wish I had.  But from having discovered his pilot logbooks among my recently deceased mother’s personal effects, I was able to piece the story together.

Leonard earned his pilot’s wings in 1944, and was a dive bomber pilot in the Pacific during the closing days of WWII. He returned to the military during the Korean War era, and transitioned to flying helicopters.  He was a captain in the US Marine Corps.

I was able to decipher his story with his logbook and the help of the internet.  The relevant logbook entry itself looks innocuous:

The mission was, of course, classified top secret.  There were no explanatory notes saying “Wow, what an explosion!”  No philosophical statement about witnessing the unleashing of Shiva, the destroyer.  Just one more logbook entry for what looked like a routine flight among dozens of similar entries.

As I started looking through the earlier entries in the logbook, and started looking up the facts surrounding the atomic testing in the Bikini Atoll, I realized I was looking at a piece of history.  With that realization came a flood of confusing feelings: honored to have had as my step-father a man who gave his life – albeit with a long delay – in the service of his country.  Sadness with the realization of the horrific forces that were unleashed that day.  And a sense of appreciation for a personal link to an important episode in history – an episode we can read about in history books.

Here’s what that logbook entry tells us:

On the top of the page was written “Bikini Atoll.”  That’s where his ship was based during the period of the logbook entries.

March 1, 1954.  The day of the “Bravo” test, the detonation of the first deliverable hydrogen bomb in the world in Bikini Atoll.  A test that delivered 15 megatons of destructive power – the equivalent of 15 million tons of dynamite.  Two and a half times the expected destructive power: the physicists who had designed the bomb had miscalculated.

HRS-2 12019.  HRS-2: The type of aircraft he was flying.  The HRS-2 is the Marine Corps designation for  the Sikorsky H-19, a helicopter mostly used for transporting people and cargo.  12019 is the registration number for the helicopter he was flying that day.

CVE – CVE.  CVE is the designation for “Escort Aircraft Carrier.”  His flight that day started from the ship, and returned to the ship.  From earlier logbook entries I was able to see that Leonard was based

on the CVE-115.  A quick check on the internet revealed that CVE-115, a.k.a. the USS Bairoko, was the ship closest to the detonation of the H-bomb.  Sixteen men on board that ship suffered severe radiation burns from the explosion.  Many besides Leonard later died of cancer.

1R2.  Leonard conveniently had a legend for the codes taped to the front of his logbook.  “1” means the flight took place in day visual flight rules conditions.  “R2” means it was an unscheduled passenger or cargo flight.

.9 hours.  It was a short flight – he was not far from wherever it was he flew to.

PBS has a story on their website called “Race for the Superbomb.”  It contains links to original source material (originally classified) regarding the development of the H-bomb.  It includes a link to an official description of the events of that day from the Defense Nuclear Agency.

The description details two helicopter flights from the Bairoku that day – one helicopter launched at 8am for recon which was recalled due to the high level of radiation, and one of several helicopters that launched at 1015 to retrieve the firing party still in the bunker on Eneu, which was completed at 1230.  From his logbook, it’s clear he was flying one the helicopters that flew to Eneu to retrieve the firing party.  I can’t imagine what that would have been like: taking off in the face of known danger – radiation levels were much higher than had been forecast – with a gigantic mushroom cloud hanging in the sky, going to retrieve men who would presumably be in even greater danger if they stayed where they were any longer, after having witnessed the unleashing of the most powerful destructive force the world had ever seen until that time.  Was he scared?  Was he worried?  Did he think about what it all might have meant for the future of the world?  Probably not – he was a Marine pilot, one of the best, and to have been selected to be in that place at that time, clearly he must have been considered one of the cream of the crop and utterly trustworthy for the highest security clearance.  I’m sure he did his job without worrying about the risks or dangers to himself, or philosophizing about the Cold War and mankind’s ability to destroy the planet.

I found an eyewitness account of the day, which included the following reference to that helicopter flight (the entire account is worth reading, you can read it here; the author, Raymond Harbert, also contracted cancer as a result of radiation exposure):

The fleet continued to cruise. We were forty miles away from ground zero, if you can imagine, and we were cruising out there in an elliptical pattern more or less. And they had a message from Station 70 on Nan. We had left some people in there. It was all buttoned up. They had pressure doors on it and everything else. They were getting leakage into that station. And so they sent from the Bairoko helicopters in to pick them up. And when they landed, they radioed the guys, they jumped in their Jeeps, they drove to the helicopter pad, and then were flown back to the Bairoko. And of course everybody was glad to see them.

The day before the explosion, February 28, he flew a lot more: 4.4 hours, 4 landings on the carrier, 4 elsewhere.  It would appear he was shuttling men and/or supplies to the firing center.  After March 1, he didn’t fly again until March 4 – presumably because radiation levels were still too high and it was too dangerous.

What an amazing document.  What a story it tells.

And Leonard’s logbook held many other stories from his thousands of hours of flight time, including some I’d love to hear, but whose details unfortunately are forever lost.

Like the official military form reporting an accident that was taped into his logbook.  “Main rotor failure after applying full collective.”  “Aircraft status: DOG; Regulation Violations: None.”

Main rotor failure is the helicopter equivalent to a regular plane’s wings falling off at the same time the engine quits.  I would love to have heard that story, and how he managed to survive it!

3 thoughts on “Logbook from Bikini Atoll”