For when I shall have brought them into the land which I swore to their fathers, that flows with milk and honey; and they shall have eaten and filled themselves, and become fat; then will they turn to other gods, and serve them, and provoke me, and break my covenant.   …Deuteronomy 31:20

Our ancestors certainly seem to have been an ungrateful lot.  In this week’s Torah portion, Vayelech, God presents a dire forecast to Moses.  God tells Moses that after he brings the people of Israel to the land that He swore to their father, a land flowing with milk and honey, the people will eat and fill themselves and become fat.  In other words, they will experience material prosperity—they will become rich.  Nothing wrong with that.  But what happens next?  God predicts the people will turn to other gods, serve them, provoke the one true God and break the covenant!  How’s that for gratitude?

This little verse points to a fact that we all know—money does not buy happiness.  Why did the people go straying after other gods?  Clearly they were not content, they were not happy—despite their material well-being.

Most of us do two different “accountings” a year: at the end of the tax year, when we do a financial accounting, and this time of year, when we try to find the time to do some “spiritual accounting,” some taking stock of who we are and how we are living as we approach Rosh Hashanah, the Day of Judgment.

But that’s all on a personal level.  How does our society do its accounting?

While society tracks all kinds of different numbers, the one that seems to ‘count’ the most is Gross National Product, or GNP per capita.  Different countries may track different things for different purposes, but the one statistic that every country in the world seems to obsess about is GNP per capita.  How much income does the country generate per person?

The obsession with GNP per capita of course implies that it is the most important thing to measure?  Is it?

What are we trying to measure with GNP per capita?  Is it supposed to somehow be a gauge for a society’s happiness?  For its well-being?

If we focus on measuring wealth, we are implicitly saying that wealth is what’s important.  Obviously there are a lot of problems with obsessing about GNP per capita – wealth does not directly translate into health, into happiness, into a “better” society.

The King of Bhutan saw lots of problems in using GDP as the country’s scorecard.  The tiny country of Bhutan, nestled in the Himalayas between India and China is one of the most remote and inaccessible countries on the planet.  Bhutan only got hooked up to the internet a few years ago.  It’s a difficult place to get to that doesn’t see a lot of tourists.

Back in 1972 the then newly crowned leader of Bhutan, King Jigme Singye Wangchuck decided that his country’s real priority should not be the GNP—but rather it should be the GNH, the “Gross National Happiness.”

The king said that Bhutan needed to ensure that prosperity was shared across society and that it was balanced against preserving cultural traditions, protecting the environment, and a responsive government—all things the king felt would lead to an increase in happiness among his citizens.  Things that are largely subjective.

On the other hand, we should not think there is no correlation at all between money and happiness.  On a national level, it appears that money can buy happiness—to a degree.  Based on surveys of happiness, the unhappiest countries in the world all have per capita GNPs below $7,000.  This does not mean there are not differences above this threshold: Ireland and Greece have about the same income level, yet the Irish are way happier than the Greeks.  But this does tell us that money can put an end to misery.  And at the high end of the chart on income, the spread is narrow: we are a little wealthier than the Swiss, but they are still a little happier than we are.

And come on, we all know that at least to a degree, money can buy happiness.  I may not understand why Carrie from Sex and the City got so much pleasure out of $300 shoes, but I love my big screen TV and spending money on nice vacations!

But the surprise in the national happiness rankings is that Mexicans, with a per capita income less than a third of the US or Switzerland, are happier than either of us.  The Ukrainians are some of the most miserable people on the planet—yet as poor as they are, they have more money than the Nigerians, who are among the happiest people on the planet.  Below that $7000 GNP per capita level, there seems to be no relationship at all between wealth and happiness.

Interestingly, the majority of the most miserable countries on the planet are both poor and from the Former Soviet Union—Russia, Ukraine, Moldova, Georgia.  And it’s not just that having been Communist is bad for your happiness—the Vietnamese and the Chinese are much happier than the Former Soviets, even though income is about the same.

What’s the difference??  Why would some countries that are poor be happy, and some be miserable??

But the truth is, those who said $50k probably are showing a great deal of maturity and insight into human nature.

Living in Israel is an excellent example… our apartment here is 1/3 the size of the house we had in Toledo, we have one car instead of two – yet I don’t feel poor.  On the other hand, if I had the same standard of living in the US, I probably would feel impoverished.

This also explains why the Russians and Ukrainians are less happy than the Chinese on the same money, and why there’s less difference between Switzerland and America than between Mexico and Indonesia.  It’s all about expectations.  For Ukrainians, life has mostly gotten worse—incomes are not as secure, people who are retired are doing poorly, the rich are becoming richer but the poor are becoming poorer.  The Soviets fed them the line that they were better off than the West, now they see they are worse off—so they are depressed.  They expected more, and aren’t getting it.  They feel they are not making progress.  The Chinese standard of living is improving every year—so they are happier, even though they don’t actually have any more money.  All of which proves the wisdom of the teaching from Pirkei Avot: “Who is wealthy? One who is happy with his portion.”

Which points to one of the problems with focusing on GNH – if you are starving, a peanut butter and jelly sandwich will make you happy; yet is that the appropriate goal for a country?

The Declaration of Independence seems to support the approach of Bhutan-after all, we told in the Declaration that all men are entitled to life, liberty, and the pursuit of happiness.  Government exists to ensure those t
hings.  So if we’re entitled to the pursuit of happiness, what better measure of how our government is doing than if we are actually getting happier?

Bhutan’s GNH actually takes a very wise approach to defining happiness, recognizing that there are objective and subjective dimensions.  According to the official “Gross National Happiness” web site, “GNH indicators include both objective and subjective dimensions of life. The construction of an index should give equal weight to both the functional aspects of human society as well as the emotive side of human experience. To give just one example, peoples’ perceptions of their own safety and security are as important in determining happiness as objective crime statistics. That balance allows good representation of information between the objective and the subjective.”  Israelis can definitely relate to this: when it comes to security, it’s not just how secure you actually are – even with terrorism, Israel is MUCH safer than America – it’s about how safe you feel.

But the whole discussion begs the question: is happiness an appropriate goal?

What does the Torah and Judaism have to say about happiness?

It’s clearly viewed as a good thing.  The Talmud tells us "the Holy Spirit rests only on one who has a joyous heart.”  In Ruach Chaim, Rabbi Chaim Volozhin's commentary to Pirkei Avot, he wrote "A person in a joyful mood can learn more in an hour than a depressed person can learn in many hours."  We know that depression can be debilitating, and happiness energizing.  Rebbe Nachman says “it is a great mitzvah to serve God with joy always.”

And the mitzvah to be happy isn’t just some happy rabbi’s novel idea: it’s a commandment in the Torah to be happy—at least certain times of the year.  In fact it’s my favorite commandment in the Torah.  On the holiday of Sukkot (coming soon to sukkah near you), the Torah commands us “You will be happy on your festival – you and your sons and your daughters, your servants, the Levi and the stranger and orphan and the widow that is in your gates.”  We are all ordered to be happy!

Can you order someone to feel happy?  How can we ever fulfill this commandment, to be happy for every minute of the 8 days of Sukkot?

Perhaps Torah is not really giving an order—but rather making a prediction.  When the harvest is in, you have material plenty, you don’t have to work too hard, you’ll be happy.

Rav Kook taught that joy comes from the perception that some unexpected good has befallen us – in other words, just like with our nations – life exceeds expectations.

Happiness then, is not the goal – it’s the result.  We should avoid confusing cause and effect.  Pursue happiness, and you may find yourself chasing your tail.

Next week we celebrate “Shabbat Shuvah,” the “Shabbat of Return,” when we (re)turn to God, the last Shabbat of the Jewish Year, the last Shabbat before Rosh Hashanah.  In the Haftorah we will read on  Shabbat Shuvah, the prophet Joel tells us “Rejoice in the Lord your God.”  The Torah gives us instruction on what the real goal is – walk in God’s ways, help make the world a better place, cultivate an attitude of being grateful to God for all the good things that God has given you—and a much more lasting happiness will follow than you can get even from a big screen TV and fancy vacations!

Be Happy, It's Sukkot! 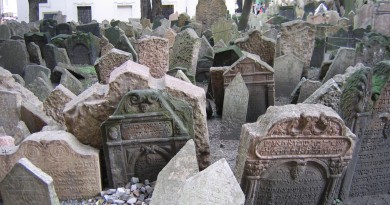 Yom Kippur Among the Dying

One thought on “Vayelech 5770 — The Secret of Happiness”