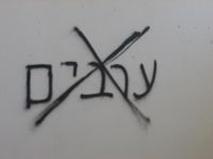 Click here to read the text of the letter in English translation, followed by the original Hebrew.

The latest religious flashpoint in Israel is a ruling by 40 municipal rabbis – rabbis who are on the state payroll – that it is forbidden under Jewish law (halacha) to rent an apartment in Israel to a non-Jew. They have a number of spurious claims as to why this is so, including that Jews are commanded to "conquer" the land of Israel and must hold on to all the land, that renting apartments to non-Jews could lead to intermarriage and corruption of Jewish youth, and last but not least, it could reduce property values. Gee, have Jews in other places like America ever heard the argument that renting to Jews would reduce property values? You can read about the whole story here. I have so far been unsuccessful in finding a copy of the full text, in either Hebrew or English of the notorious letter; when I find it, I will post a link.

Whenever I hear of something like this I am disappointed, but not really surprised. Once upon a time, I was surprised. I was surprised because studying Torah turned me into a liberal. My good friend Michael and I seem to have been destined to always have our politics cancel each other out: he started out liberal and has ended libertarian, and I started out libertarian and ended up liberal. And I give the Torah credit for turning my into a liberal. From studying the Torah I learned concepts such as a focus on responsibilities, not rights; I learned we are all created in God's image, I learned we ARE our brother's keeper, and I learned we are all, every one of us, Jew and non-Jew, descended from a common ancestor so we are all cousins. Science confirms we are cousins, they have found common maternal and common paternal ancestors for us all. In the Talmud I learned that even though Jews share a special relationship like being part of an extended family, we are also obligated to treat non-Jews with respect, with examples given such as burying their dead and feeding and clothing their poor and hungry.

Given those liberal values I learned from Torah, how is that those municipal rabbis studied the same books and sources that I did, yet they ended up right wing and racist? It's because there is a Torah of love and Torah of hate. If you want to find messages of love and brotherhood in the Torah, you can. If you want to find messages of hate and repression in the Torah, you can. The same Torah that says "love your neighbor as yourself" also says "you shall not suffer a witch to live" and commands us to destroy every last Amalekite, men, women, and children.

The Baal Shem Tov (Besht), the 18th century founder of hasidism, said that before studying Torah, one should do teshuva. The Besht said the Torah is an amplifier: if you are a good person, it will make you better; but if you are bad person oddly enough, studying Torah can make you worse! The prophet Hosea tells us "﻿ for the ways of the Lord are right, and the righteous walk in them; but the transgressors shall stumble in them."

Thus I am disappointed but not surprised when I find religious Jews, rabbis even, who "stumble in them," who stumble in the ways of the Lord, who proclaim wickedness in the name of God.

Fortunately, I know that those who are wicked and/or misguided are greatly outnumbered by those who are righteous. In contrast to the 40 rabbis who signed the hateful ruling, over 1,200 rabbis, myself included, have signed a petition condemning the ruling. The condemnation has been across the religious spectrum, not just from "lefty liberal rabbis," but many Orthodox and "ultra-Orthodox" rabbis have also joined in condemning the ruling.

My teacher Rabbi David Golinkin wrote an excellent teshuvah (Jewish legal response) arguing why it is in fact permitted under Jewish law to rent apartments to non-Jews. Obviously he didn't write this ruling before the latest controversy because it would not have occurred to him that there was a need for such a teshuvah. One would think that it is obvious! You can read his ruling here.

What offends me most about the situation is that as an Israeli citizen, my tax dollars are going to pay the salaries of the bigoted rabbis, who are spitting on the foundational document of the state of Israel, our Declaration of Independence, which proclaims that the state "will foster the development of the country for the benefit of all its inhabitants; it will be based on freedom, justice and peace as envisaged by the prophets of Israel; it will ensure complete equality of social and political rights to all its inhabitants irrespective of religion, race or sex; it will guarantee freedom of religion, conscience, language, education and culture." The full text of the Declaration of Independence can be read here. Any Muslim or Christian citizens would, of course, be even more offended than I that their tax dollars go to support such hateful people.

If we are going to have rabbis on the state payroll in Israel, perhaps THEY should be required to take a loyalty oath to the state of Israel as a Jewish and democratic state that affords freedom of religion and respect to all her citizens. Any acts of blatant discrimination or disrespect toward the principles of the state should be grounds for immediate termination.

Better yet, government should get out of the religion business altogether. Jews in almost every other country in the world manage to support their religious institutions without handouts from the government. Especially onerous is the far right religious monopoly of "official" marriages and conversions in Israel. The time is long past for the institute of the chief rabbinate (a "gift" from the British, based on the "Rishon L'zion" of the Ottoman Empire) to be abolished. May it happen "bimheira v'yameinu," quickly and in our days!

**"Fairness in reporting note — Chief Rabbi Yona Metzger has not endorsed the racist ruling; however, neither has he condemned it.