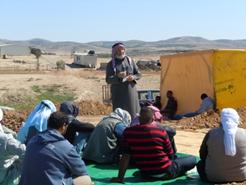 “Justice, justice shall you pursue”

The Torah commands us to behave justly. It’s not enough to follow the strict letter of the law if that would lead to an injustice.

I was at the site of the unrecognized Bedouin village of El Arakib today. The Jewish National Fund and the State of Israel have done everything they can to completely wipe out any trace that this village ever existed.

It’s a bit of a complicated story: in 1906 one Bedouin tribe bought the land from another Bedouin tribe, using the type of land documentation that was common among the Bedouins, but not necessarily following the letter of Ottoman law. They have a cemetery there with graves going back to 1914, showing how long their families have lived there. For several generations, the people lived there, raising sheep, tending olives, living a typical Bedouin existence. Fast forward nearly 50 years: the State of Israel in 1953 told the residents that they needed to leave for six months, for a military exercise. Six months later, they still can’t go back. The state tries to resettle all the Bedouin in towns, like Rahat, and take over their traditional lands for other purposes. Many Bedouin prefer their traditional life. In the late 90s, the families that owned the land in El Arakib moved back, into stone houses, and lived there for a number of years. Now the JNF wants the land to plant trees, the residents were kicked out, their village was destroyed, their trees, etc., were removed. So they keep going back and setting up new homes – glorified tents basically, but a place to stay. And the government keeps coming back and destroying it. 17 times so far. But these people are not ready to give up.

In this week’s Torah portion we read the story of the Golden Calf – the people of Israel worship a golden statue instead of worshipping God. God and Moses get very angry: thousands of people die in a horrible plague. God doesn’t like it when we worship something other than God.

When does attachment to the land become idol worship? When we put land above God, above Torah, and above the values that we learn from God and Torah. What does God want: more trees planted by Jews on land controlled by Jews, or justice, righteousness, and peace between His children? I have no doubt what the answer is: justice and peace is more important than who lays claim to which piece of land. There is lots of land for us to share.

Which is exactly what the sheikh told us after our interfaith prayer this afternoon. He doesn’t have anything against Jews or Israelis – he doesn’t mind sharing with us. There’s plenty of land for everyone.

Now why can’t everyone think that way?

PS: you can read more details about El Arakib here.

How to tell your dictionary comes from Israel