How is it possible to feel both proud and embarrassed at the same time?

It sounds like an oxymoron, but that’s exactly how I felt yesterday at a meeting with UN High Commissioner for Human Rights, Navanetham Pillay.

I was part of a delegation of about 20 representatives of Israeli human rights organizations that met with the High Commissioner to discuss human rights issues in the Occupied Territories of the West Bank and Gaza.

A wide spectrum of human rights groups were represented at the meeting: besides Rabbis for Human Rights, there were representatives from Physicians for Human Rights, Betselem, Yesh Din, the Israeli Committee Against Home Demolitions, the Association for Civil Rights in Israel, Machsom Watch, the Norwegian Refugee Council, Adalah, Save the Children, Gisha, the World Council of Churches, and no doubt some others I’m forgetting.

The litany of human rights abuses perpetrated by the state of Israel on Palestinians is what I found embarrassing.  As an Israeli, it was painful to hear over and over about the many ways in which my government violates basic human rights of Palestinians, over everything from freedom of movement to lack of due process or access to the legal system. It was sobering to hear testimony about East Jerusalem children being arrested, and East Jerusalem residents losing faith in the Israeli legal system, and not bothering to report violence from extremist settlers, because it just backfires: they end up being interrogated for hours and harassed themselves.

On the other hand, I was proud of how many Israeli organizations were out there working on behalf of the much abused Palestinians.  I suspect in most conflict zones in the world, you don’t have associations from the “oppressor” side so ardently defending the rights of the oppressed.  One of the UN representatives agreed, commenting that in Sri Lanka the UN themselves even got thrown out because the government wasn’t interested in hearing about human rights abuses.

But the meeting affirmed for me, once again, the horrible impact of the occupation.  Yes, Israel has valid security concerns; but if the Palestinians had their own state and we withdrew, we would manage our security concerns by having proper borders, and all of us human rights organizations would be out of business.  Halavei, may that time come quickly and in our days… 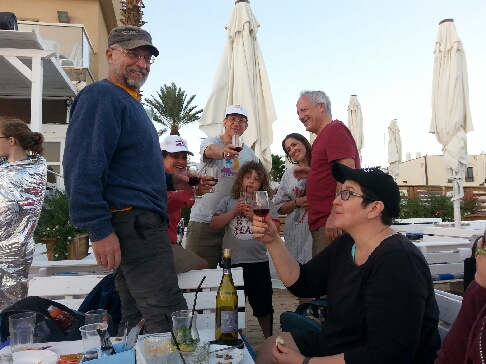