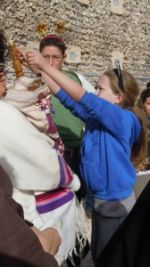 On Monday, March 7, Women of the Wall held their monthly Rosh Chodesh (new month) services.  I have blogged on the subject before, click here to read some previous posts.

There were a couple of things noteworthy in this month’s prayers.

First of all, over on the men’s side, it was somewhat scarier than usual.  There is normally a contingent of male supporters of Women of the Wall who say their prayers on the men’s side of the divider while the women are praying, both as an expression of solidarity, as well as to be there in the event there are any problems, which unfortunately sometimes there are.  This month the charedi protesters were more numerous, louder, and in general looked more “threatening” than usual.  For the first time since I’ve been going the police provided us with an escort — clearly for our protection — when the women were ready to move to Robinson’s Arch for the Torah reading and we were leaving to accompany them.

Secondly, as reported by Emily Shapiro Katz on the Women of the Wall blog over on the women’s side the police told the women they could not dance.

The mind boggles. Why do they make this stuff up?  Where on earth is it written that women, together just with other women, can’t dance?  Don’t they know that the Torah itself praises women dancing?  In Exodus 15:20 it is says “﻿And Miriam the prophetess, the sister of Aaron, took a tambourine in her hand; and all the women went out after her with tambourines, dancing.”  Just like Debbie Friedman’s “Miriam’s Song,” “And the women dancing with their timbrels, followed Miriam…”

Lauri was so upset by that one that I think she’s ready to organize some women willing to be arrested for dancing next month.  Unreal!

On a personal note, I was glad that two of our daughters, Katherine and Devorah, came out with us this time.  That’s 10-year-old Devorah dressing the Torah in the picture.  Social activism starts at an early age in our family! 🙂

A Walking Tour without Sayed Kashua