The other day, a friend of mine shared some advice he received from a rabbi: “If your wife is giving you crap, you shouldn’t fight or complain, you should just accept it.  It’s happening because God wants you to receive that crap. Do whatever she tells you.”

Now if you are in a healthy marriage, and are a typical guy, that might be OK marriage advice: after all, guys are notorious for things like leaving the toilet seat up, throwing their socks on the floor, etc.

HOWEVER — what if we reverse the situation and increase the intensity?  If a woman was being physically abused, beaten by her husband, would we tell her to just take it, because God wants her to receive that crap?  I don’t think most of us would dare go there.

The theology that everything happens because God willed it, and when we suffer the aggressor is simply “the rod of God,” punishing us because God has determined we deserve punishment, has been around at least 2,500 years.  It has been around since Nebuchadnezzar destroyed the Jewish Temple in Jerusalem in 587 BCE.

That’s the same theology that was displayed when Rabbi Ovadiah Yosef famously said some years ago that all 6 million people who perished in the Shoah (Holocaust) were reincarnated sinners.

Sorry, I find that a repugnant theology.  Free will trumps hashgacha pratit (the idea that God controls every detail that happens).  The Holocaust did not happen because God wanted to punish the victims.  The Holocaust happened because the Nazis were evil, and far too many people let them get away with their evil.  The Nazis used their God-given free will in the most horrendous, abhorrent of ways.

The rabbis came up with that theology because they wanted to find meaning in their suffering.  It’s a natural desire; if we can find meaning, at least the suffering serves some purpose.  Some years ago, Marlene Marks wrote about her struggle with cancer in the Los Angeles Jewish Journal.  She said “I’m tired of looking for meaning in my cancer.  I just want to get better.”

We will never “get better” from the horrors of the Holocaust.  Nothing can make us whole; nothing can replace the 6 million lost souls (including some of my cousins).

May the memory of those who perished in the Holocaust live on forever.

PS: The advice I would give if your wife is giving you crap is to listen carefully.  Don’t automatically become defensive and angry.  Maybe you have done something wrong.  Just as if you get sick, perhaps you should examine your lifestyle for things that might have contributed to the illness.  But don’t blame your troubles on God.  And don’t just take it if it’s not deserved. 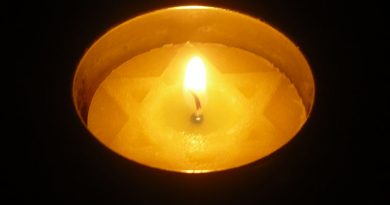