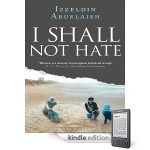 I’m a pretty macho guy.  I’m a black belt, flight instructor, SCUBA Divemaster.  My father and grandfather were both cops, and we had “macho values” at home like “boys don’t cry.”

“I Shall Not Hate: A Gaza Doctor’s Journey on the Road to Peace” made me cry.  I have trouble imagining someone who could read chapter six of this well-written book and not cry.

Dr. Izzeldin Abuelaish is my age – we were both born in the same year, 1955.  As I read his story of overcoming incredible hardships, only to have his family violently torn to shreds in Israel’s bombardment of Gaza, I paused to think about my good fortune in being born in a US Army hospital in Heidelberg, Germany instead of in a refugee camp in Gaza.

The basic facts of what happened to Dr. Abuelaish on January 16, 2009 are well known.  He is a physician, the first Palestinian physician to complete a residency and to work in an Israeli hospital.  Even throughout the Intifada, he commuted from Gaza to Soroka Hospital in Beersheba.  He was also a peace activist who believed in creating peace from the ground up, people to people.  Before the Intifada, when Israelis could freely travel to Gaza, he used to organize tours for medical colleagues and others to come to Gaza and see for themselves what life was like there, to allow them to meet the people who lived there, ask questions, make human connections.  He viewed himself as a bridge, showing Palestinians that not all Israelis are soldiers and occupiers, and showing Israelis that not all Palestinians are terrorists, or even terrorist sympathizers.

On that day in 2009 two Israeli tank shells slammed into his home in Gaza, killing three of his children and a niece.  The peace activist was in another room; he walked into his children’s bedroom to a sight I cannot comprehend: his children blown to pieces, beheaded, dead and dying.  Two additional children were gravely wounded.  He called a friend – an Israeli TV journalist to whom he had been giving updates about what was happening in Gaza.  The friend was on the air broadcasting, and decided to take the call on the air; he felt something important must have been happening.  Live on TV much of Israel heard an anguished father cry “They shelled my house.  They killed my daughters. What have we done?”  He kept crying, “Oh God, they killed my daughters, Shlomi, I wanted to save them, but they are dead.  They were hit in the head, they died on the spot.  Allah what have we done to them?”  It is widely acknowledged that outrage over the deaths of this gentle man’s children contributed to the cease fire being called shortly afterwards.

But the rest of his story is not as well known, and it truly deserves to be well known.  Most of us Israelis really have no clue what life is like in Gaza. In his book he describes, dispassionately, matter of factly, almost clinically, like the physician that he is, what life was like in Gaza, then and now.  While I was an 8 year old living in a big house with a yard and a forest behind in the suburbs of New York, he was an 8 year old living in a squalid ramshackle building with ten kids in two bedrooms, with no indoor plumbing.  My after school activities were riding my bike and building model airplanes.  His after school activity was working to make a few cents to help his family get by.

He overcame all that adversity and went on to university.  Along the way he met some kind Jews at a summer job in Israel, and learned that not all Jews are automatically “the enemy.”  He learned that there are many cultural similarities between Jews and Palestinians, including close family ties and a tendency to talk fast and loud. He went on to build bridges between the communities.

The book also tells us something about the beautiful children he lost that ugly day in January. Bessan, his oldest, was 21, about the same age as my second oldest daughter.  Bessan was just finishing her studies for a degree in business when she was killed by that Israeli tank shell.  Fifteen year old Mayar was dedicated to justice and was her class president at school; 14 year old Aya was a kind child who loved to cook her father’s favorite foods.

And these three deaths came just a few months after the death of his beloved wife to a particularly virulent strain of leukemia.  I cannot imagine the depths of despair his soul must have reached.  Yet he realized he could choose between light and dark, good and evil.  He chose the path of light.  Despite all that he experienced he still says:

“But I maintain that revenge and counter-revenge are suicidal, that mutual respect, equality, and coexistence are the only reasonable way forward, and I firmly believe that the vast majority of people in the region agree with me.“

There are those Israeli right wingers who might be offended by my sympathy for his pain; “what,” they might say, “about the innocent Israeli children who were traumatized running to bomb shelters with Qassam rockets coming their way?”  They would say it’s the Palestinians’ own fault.

I am fully aware of the pain on our side.  I also cried in 2003 when I heard about the physician and his daughter killed by a suicide bomber while they were drinking coffee in Café Hillel (one of my “usual haunts”), the day before her wedding day.  And I cried a few months ago when I heard of the cold-blooded murder of the Fogel family, including a baby, by Palestinian terrorists; the father of the murdered mother lives around the block from me.  But our own pain should not make us numb to the pain of others, especially if we are the ones causing that pain. As Dr. Abuelaish says in his book, “We all need to understand that there are evil people in every country, every religion, every culture. But there is also a silent camp of people in every country, who believe, like I do, that we can bring two communities together by listening to each other’s points of view and concerns.”

I truly found the book inspirational.  As readers of this blog well know, I am also a believer in making peace from the ground up, in having human connections; last week I visited a mosque in the West Bank that had been subject to a “price tag” arson attack, and had coffee and lunch in the home of a Palestinian resident of the village.  Reading “I Shall Not Hate” reinforced for me the importance of this holy work, and it provides encouragement to read such an articulate account from someone on the “other side” (I hate saying that, may the day come when we recognize we’re all on the same side).  I absolutely agree with Dr. Abuelaish that the vast majority of people in the region want peace and could find an agreeable formula.  Our governments are letting us down.

Until then, Dr. Abuelaish has taken what remains of his family to Canada for a well-deserved break from the war zone, and we’re waiting for Moshiach (the Messiah) to come, and trying to build peace from the ground up.

A shameful day for America

2 thoughts on “I Shall Not Hate”