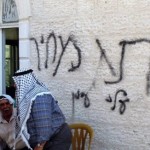 Early Tuesday morning extremist settlers set a mosque on fire in the West Bank town of Mughayar.  Graffiti they left at the site explictly said it was a “price tag” for the Israeli government’s evacuation of the illegal outpost of Alei Ayin.  You can read more about the incident here.

I visited the mosque this morning with a delegation from Rabbis for Human Rights. Even though the attack was just on Tuesday, by today, Thursday, repairs were already well under way: walls were already painted and they were installing new carpet while we were there.  When I visited a mosque last year that had also been torched by vandals, we still saw the destruction when we arrived a few days later. I wrote about that visit here. 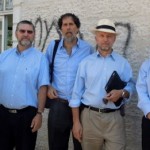 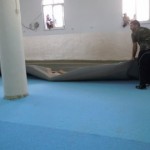 I really wish I would get the opportunity to visit mosques OTHER than to express sympathy and solidarity when some of my fellow Jews do something reprehensible.

We brought with us some new Korans as a gift to replace ones that had been damaged by the smoke. As chairman of Rabbis for Human Rights, I was given the honor of ceremonially presenting a Koran to the mayor of Mughayar, Faraj al-Nassan. We actually “borrowed” the Koran back a while later so I could present it again, this time to Palestinian Authority Minister of Religious Affairs, Mahmoud al-Habbash.  He may be ex-Hamas, but he did powerfully condemn the attacks on the settlers in Itamar, so I think we can believe he honestly no longer supports that ideology.

My remarks when I gave them the Koran follow (loosely, I spoke extemporaneously):

We are here as Rabbis for Human Rights, men of faith, religious people, to say that what happened here is completely against the values of the Jewish religion.

Furthermore, we are cautioned against vengeance.  The Torah also teaches “vengeance is mine, saith the Lord.”  Anyone who would act in vengeance should beware of the vengeance of the Lord.

I am pleased to present you with this Koran as a symbol of our respect and honor.  We are all sons of Ibrahim (Abraham).  We pray for the day when all of Ibrahim’s children may live together in harmony and peace, Amen.

After the ceremony we went to the home of Jamir for refreshments.  Jamir is a succes 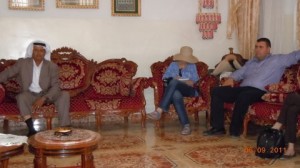 sful farmer, willing to put up with the harassment of those settlers who would block his access to his land.  Rabbis for Human Rights is frequently out defending him during harvest time.  I was surprised to learn that his family has deep ties to Chicago and all of his 9 kids also have American passports. Not only that, one of the villages we drove through on the way there is, we were told, 75% owned by Americans (Muslim American-Palestinians).  And most of them are only there in the summer.  I had no idea!  Sounds just like the housing development at Mamila, across from Jaffa Gate, which is like a ghost town most of the year, because it is mostly owned by American Jews who only visit during the holidays.  Yet another similarity we share!  Not only that, just as many American Jews are more radical than many Israeli Jews, many American-Palestinian Muslims are more radical than the locals.  I guess it’s easy to be ideologically extreme if you don’t have to live with the consequences of your ideology on a full-time basis. 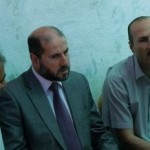 After a bite to eat we went back to the mosque to meet with the Minister (he’s the guy with the tie).  I gave an abbreviated version of my comments; he said “the attack on the mosque here is not only an attack on us, it is an attack on you and your religious values.”  I agreed.

I find it outrageous and unbelievably offensive that someone mad at the Israeli government for evacuating an illegal settlement would choose to take their anger out on a mosque that had nothing to do with the decision of the Israeli government.  As one of my colleagues said on the ride home, if they were mad they should have set the Knesset on fire, not a mosque!

It’s an embarrassment that there are Jews who would do such a thing.  I hope that our presence had at least some slight positive influence toward reconciliation, and will help prevent some of their “hot heads” from feeling they have to take vengeance on the settlers.  A cycle of violence and revenge violence, violence and revenge violence only serves to make the day when we will have peace here recede even further.  Which may be the perpetrators’ goal, but we, the decent people of Israel, Palestine, and the world, can’t let the bad guys win.  It’s too important.

10 thoughts on “Rabbis Against “Price Tags””