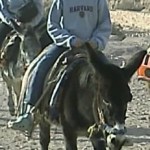 “Come then, put a curse on this people…For I know that he who you bless is blessed indeed, and he whom you curse is cursed.”  …Numbers 22:6

Balaam was a non-Jewish prophet (he talked to God, God gave him instructions) in the days when Israel was wandering in the desert.  He is famous as the owner of the only talking donkey in the Bible.  Balak, king of Moab, was scared of the Israelite nation: the Torah tells us “Moab was alarmed because that people was so numerous. Moab dreaded the Israelites…”  So he sent messengers to Balaam.  He wanted to hire him to curse the Israelites.

The rabbinic commentator Beit Ramah asks a good question: why doesn’t Balak just ask for Balaam to bless Moab?  Why instead ask him to curse Israel?  His answer is that Balak was so consumed by hatred of Israel he was more interested in destroying Israel than in securing blessings for his own people.

Anyone living in Israel, of course, would connect this teaching with Hamas.  They are so intent on destroying Israel they neglect what would be best for their own people.  When Israel withdrew from the Gaza Strip in 2005, instead of using that as an opportunity to build a better life for Gazans, they used that as an opportunity to start launching missiles at Israeli civilians — leading to war, hatred, death, and a miserable life for their own people.

It’s time for Hamas to stop cursing Israel — and to focus on securing blessings for their own people, the long suffering residents of Gaza.

Seven years ago already I wrote about this issue, at somewhat greater length.  You can read that post here.  It’s sad how little has changed in seven years.

Shelach 5772: Straying after your heart