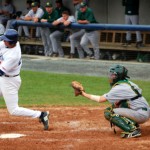 July is the month of Independence Day—the holiday of hot dogs, hamburgers, beer and bar-b-ques, not to mention fireworks. And all of those things remind me of baseball. Even though the World Series is months away, somehow the month of July seems to be the heart of the baseball season. Baseball is the classic summer sport, and July is the heart of the summer.

To start with there are two sides. We have a yetzer hatov, our good inclination, and a yetzer hara, a bad inclination. Children play in Little League, but once you get to be past bar/bat mitzvah age, you’re in the game that counts.

Of course, when we think of Passover we think of food, and certainly Judaism and baseball both have special foods—even if we can’t eat the non-kosher ballpark hot dogs, there are still peanuts and Cracker Jacks.

Baseball and Judaism are both full of rituals—baseball has the singing of the national anthem, the throwing out of the first pitch. In both baseball and Judaism the rituals are performed with a covered head. And there’s even one baseball ritual that I imported to our High Holiday services: the 7th inning stretch.

Speaking of holidays, baseball, of course, also has its own holidays: the World Series and the All Star Game to name two.

Baseball and Judaism both have a lot of rules. You got the rabbi-umpires making sure the rules are followed (at least at the “ball park”—synagogue!). Some of the rules in both baseball and Judaism are plain and simple, and others are complicated, confusing, and need an expert’s explanation. Sometimes we think we know the rule, but when we dig into it we find it’s complicated. Take the designated hitter rule: someone else bats for the pitcher. Simple, right? Here’s a little excerpt from Major League Baseball’s web site: “Pinch hitters for a Designated Hitter may be used. Any substitute hitter for a Designated Hitter himself becomes a Designated Hitter. A replaced Designated Hitter shall not re-enter the game in any capacity. The Designated Hitter may be used defensively, continuing to bat in the same position in the batting order, but the pitcher must then bat in the place of the substituted defensive player, unless more than one substitution is made, and the manager then must designate their spots in the batting order.” Confused?

You may need a “rabbi of baseball” to explain that one to you. The Jewish equivalent of the “designated hitter”—the “Shabbos goy”—has rules equally complex. If the non-Jew makes himself a cup of coffee, and happens to make extra you can drink a cup. But if he asks you if you would like a cup of coffee before he makes any you have to tell him no. Ask me if you’d like to know why.

In both baseball and Judaism at the start of a New Year you have a chance to be a winner. The team that finished the year in the basement starts out with the same 0-0 record as the team that won the World Series.

Similarly, if you had a bad year last year, if you do honest teshuva, repentance during Rosh Hashana and Yom Kippur, you get to start the New Year with a clean slate: a 0-0 record, your old sins no longer held against you.

And last but not least, in both Judaism and baseball, while an individual is important, we win or lose as a community. One star player cannot drag a team into the World Series any more than one star rabbi or one star cantor or one star congregant or one star synagogue president can drag a congregation into a winning position. We affirm this every day when we recite the Shema, where the blessings and curses that come with obeying or disobeying the mitzvot are stated in the plural form—they come to us as a community, not necessarily to us as individuals.

Using Inheritance to Promote Marriage Within the Faith

One thought on “Judaism and Baseball”