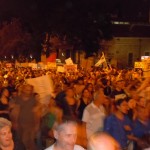 Jerusalem is a great city for a political activist.  Hardly a week goes by without a demonstration of some sort.  Peace, pluralism, gay rights, you name it, we have demonstrations for everything.  Tonight (Saturday, July 30, 2011) I went to the first demonstration I’ve been to that was focused on issues of “social justice.”

Earlier in the week, I had heard that tonight’s demonstration was going to be sort of an all-in-one, housing, poor wages for young doctors, pluralism, etc.  Turned out to really be focused on housing.  I have to admit, I went feeling more like a spectator than at other demonstrations I’ve been to here.  When I go to demonstrations for peace, or for pluralism, those are my fights: they affect my life.  The affordable housing fight isn’t really my fight.  I’m upper middle class.  Even though my apartment would likely be considered modest by American standards, by Israeli standards it’s considered pretty luxurious.  My housing issue is I can’t afford the $1m plus price tag the owner of my apartment wants for it, so I have to move to another equally comfy place to rent.  Not exactly a pressing human rights issue. As a friend of mine said, “there is no human right to live in Arnona (our neighborhood, one of the more expensive neighborhoods in Jerusalem).” 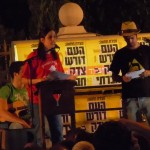 And that’s what makes the housing demonstrations in Israel a little confusing.  Is it yuppies complaining that they can’t afford to buy the luxury apartment they want in Tel Aviv that are walking distance to work?  Or is it poor people with a legitimate gripe?

Here in Jerusalem anyway, it seemed more of the latter.  The speakers were students.  One of them said he realized that his personal housing problem wasn’t just his problem, but it’s really a problem for his entire generation, a social problem, and something needs to be done.

The speakers demanded changes in government policy; they criticized the big construction companies that intentionally keep supply down because they make more money that way.

The title of this post, “The Nation Demands Social Justice” was the most frequently heard chant of the evening (ha’am doreish tzedek chevrati).  I found another chant interesting: “We want justice, not charity,” which sounds better in Hebrew because the words for justice (tzedek) and charity (tzedaka) are related. And that approach makes it easier for me to get behind the demonstration and support their demands — they are not looking to transfer wealth from people like me to people like them.  They are looking for changes in government policy, some of which might benefit just them, others of which will benefit everyone, even the middle and upper middle classes who find it hard to afford the housing they want in the neighborhoods they want.

The housing system here in Israel is broken; everyone admits that.  There are government studies from three years ago already saying the situation was a “crisis.”  93% of the land in Israel is under control of the Israeli Land Authority.  There is very little private land someone can just buy to build a house.  It’s all tied up in government bureaucracy, doled out to developers in a system widely seen as corrupt, and the bureaucratic hurdles to building — cumbersome permit processes crossing several ministries — are all seen as contributing to a serious shortage of housing in Israel, which of course leads to high prices.

And even though the housing issue is not one that’s a personal issue for me, I think it’s important for everyone, even the bourgeoisie, to support the changes the young people are calling for.  When a whole generation feels, as one speaker put it, “I work more, receive less, and can’t finish the month,” society is in trouble.

Judaism does not so much talk about human rights, such as a right to housing, as much as it talks about responsibilities.  We have a situation today where for people at the lower end of the economic spectrum there are no jobs where there is affordable housing, and there is no affordable housing where there are jobs.  We as a society are not living up to our obligations.  In the Jewish tradition, we are responsible to create a society where everyone can live in dignity with the basics: food, housing, work.  We need to do better.  Thomas Friedman pointed out that the baby boom generation, my generation, in many ways is a failure: we were handed tremendous financial advantages and freedoms, largely squandered them and are sticking our kids’ generation with the bill.  No wonder they are taking to the streets. 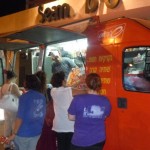 However, it was also nice to see the Israeli entrepreneurial spirit at work.  Housing might bein short supply, but if you go to a demonstration on a day when the temps topped 100, and it was still hot at night, it’s good to know you can get ice cream!

Have a great week…

Competing speeches at the UN: Abbas and Netanyahu, September 23, 2011

US Supreme Court does the right thing