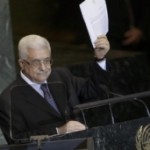 Palestinian President Mahmud Abbas gave his long anticipated speech at the UN on Friday calling for the UN to recognize an independent Palestinian state in the 1967 borders. Iraeli Prime Minister Binyamin Netanyahu gave his anticipated rebuttal. Now the UN will debate for weeks or months before bringing the matter to the Security Council for a vote.

I am not going to bother to try and predict what will happen. The level of diplomatic wrangling going on is extremely high. Surprises are possible. But I will comment on the speeches. I’m disappointed with both.

At the close of his speech, Netanyahu said “Let’s talk “doogri”. That means straightforward.”

What follows is my interpretation. If you have the time, read the full text of both speeches and make your own:

Things Abbas is right about:

I can’t predict what will happen. But in a way, this Palestinian bid represents tremendous progress, for them, and for Israel as well, although most Israelis won’t admit it. Because it may be 63 years late, but the Palestinians are finally coming back to the UN and saying “OK, we agree to the two state solution that we rejected back then.” Even though Netanyahu tried to twist Abbas’s remarks into a rejection of Israel even in Tel Aviv, with this motion, asking for a state on the 1967 lines, the Palestinians are de facto recognizing Israel’s right to Tel Aviv and the rest of pre-67 Israel. Which is huge progress from where we were forty years ago.

I really wish Obama would apply pressure to both sides.  Tell Netanyahu there’s a price for a veto: a settlement freeze.  Tell Abbas to shelve the motion during the freeze and be serious about negotiating a deal, or risk a veto and loss of financial aid.  He needs to tell the kids to behave…

Aaron and the Golden Calf: Saint, or Sinner?