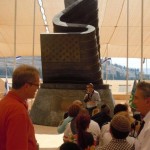 Why do we have commemorations of 9/11?

Clearly, there are many reasons.  To honor the dead. To reflect on the impact that horrendous day has had on all of our lives.  To remind us of the struggle we are in against the forces of evil.

Honoring the dead is clearly the major reason.  There is a beautiful monument to 9/11 in Israel; it’s located in the Arazim Valley, just off the main highway from Jerusalem to Tel Aviv.  You can’t really see it from the highway, it’s hidden way up in the hills.  Maybe I could spot it now that I know where to look.  But it’s not something that catches your eye.

The monument honors the nearly 3,000 people killed on 9/11 by inscribing all of their names in metal.  It’s the only memorial outside the United States that records all the names of the victims.

But 3,000 names is overwhelming.  It’s a statistic.  What impacts us are the real stories behind those 3,000 lives.

Yesterday I attended Israel’s 9/11 commemoration, held at the above mentioned monument. 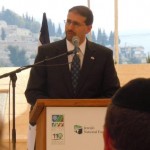 The speakers included US Ambassador to Israel Dan Shapiro, Jerusalem Mayor Nir Barkat, and Israel Deputy Foreign Minister Danny Ayalon.  They all spoke eloquently; Ambassador Shapiro and Deputy Minister Ayalon both spoke in both Hebrew and English.  You can read the Jerusalem Post’s account of the ceremony here. 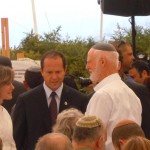 Overall, the ceremony was very professionally done — everything worked well, the sound system was fine, etc. — but it was also pretty dry.  Most of the speeches were relatively interchangeable, talking about the bond between Israel and America, how Israel more than any other nation can understand what America went through, etc., etc.  Mayor Barkat added an anecdote about how he flew into New York that for a meeting and was sitting across the river in a partner’s meeting in New Jersey when the planes hit the towers.  He couldn’t resist throwing in a dig at the people in Gaza who celebrated the death and destruction in New York.  Ambassador Shapiro was in the US Capitol when the plane hit 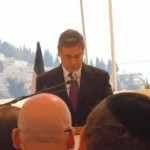 the Pentagon; Deputy Minister Ayalon added his thanks to America for helping evacuate Israeli diplomats from the embassy in Cairo over the weekend. 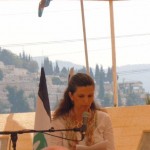 But there was only one speaker who moved me, and if the purpose of the ceremony is remembering the dead, shouldn’t we be moved?  The speaker who moved me was Sigal Shefi-Asher, whose husband, Hagay Shefi, was one of the five Israelis killed on 9/11.  She spoke of how she made new friends as a result of her personal tragedy who helped her get through the ordeal.  “At that moment I understood how meaningful the help and support of an ordinary person to another person in need can be.”  Sigal’s full remarks can be read here.

I was also a little disappointed that the ceremony had ZERO religious content.  At a commemoration for an event where thousands died, why wasn’t there a rabbi giving a benediction?  Why not have interfaith benedictions since people of many faiths died?  With family members of some of the deceased Israelis there, maybe they even could have been offered the opportunity to say kaddish?  While Sept. 11 is not the yartzeit on the Jewish calendar, I dare say it’s the date that is ingrained in everyone’s memory.  Even if you were being picky about that, they could read a text and say kaddish d’rabbanan.

After the ceremony, the parents of one of the Israelis killed on 9/11 made a rubbing of his name from the monument, which was also a poignant moment for me. 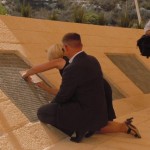 I also appreciate the perspective brought by retired Saudi Naval Officer Abdulateef Al-Mulhim, who points out that while it is indeed a great tragedy that 3,000 people died on 9/11, the events of that day also set in motion a chain of events that led to hundreds of thousands of people dying thousands of miles away.  Are they also victims of 9/11?  You can see his post here.

May we soon see the day when terrorism is a thing of the past, when the whole world resolves political and theological differences peacefully. 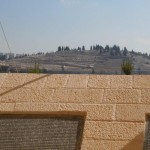 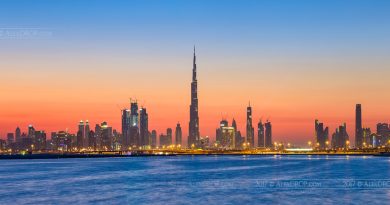 One thought on “Israel’s 9/11 Commemoration”