On Yom Kippur we read the story of Jonah, the reluctant prophet who fled from his God-assigned mission on a ship, was tossed overboard, and spent three days inside a big fish before God decided to give him another chance. So naturally, the story of Jonah makes a very appropriate subject for a sermon on a cruise ship!

The story of Jonah opens with God telling Jonah “I’ve got a mission for you – I want you to go to Nineveh, and get those people there to repent.” Instead of saying “sure, God,” Jonah does the opposite – he flees in the opposite direction of Nineveh, hopping on a boat bound for Tarshish.

Why did Jonah try to flee from his mission?  Why was he less than thrilled with the assignment God gave him?

To understand this, you have to appreciate the politics of the day in Jonah’s time.   Our story takes place during the reign of King Jeroboam II, who ruled Israel around 789-748 BCE. At that time Nineveh was a great city, capital of the Assyrian Empire.  This is the very same Assyrian Empire that conquered the northern part of Israel, sending the ten northern tribes into exile.

That would be like God coming today and telling us “book a flight to Tehran, you need to tell those Iranians, especially that Ahmadinajad fellow, to repent.”  Even though I lived in Tehran, in Iran, for a year and am familiar with the place, I’d be worried about my personal security if I were to travel there.  Maybe Jonah had a similar fear. Most Israelis, like myself, don’t feel too kindly toward Iran right now – we would not be inclined to help them out, to do them a favor and spare them God’s wrath.  Most Israelis, I suspect, would prefer that God pour his wrath out on the heads of the Iranians, especially on the head of that nutcase Ahmadinajad who wants to wipe Israel off the map.

So Jonah flees.  He hops on a ship – no doubt smaller and less luxurious than the one we are riding on – and heads for Tarshish, at the opposite end of the Mediterranean from Israel and the road to Nineveh. While they are at sea, a great storm appears, and all the sailors on the boat are praying for their lives, while Jonah is holed up down below, ignoring everything that is going on.  The sailors confront Jonah, perhaps sensing that he had something to do with what was happening.  A lot they cast falls on Jonah; he admits he was fleeing from his God, who is the creator of heaven and earth.  Jonah tells them, throw me overboard, and I’m sure the sea will calm down.

This is truly the measure of Jonah’s reluctance: he was prepared to commit suicide rather than do God’s will and travel to Nineveh.  The sailors reluctantly throw Jonah overboard, the seas calm down.  The sailors do teshuvah – they turn to God, they offer sacrifices to OUR God.  Jonah, meanwhile, remains unrepentant, and God appoints a big fish to swallow him whole.  Jonah spends three days and nights inside the fish – which does sound particularly disgusting, does it not?  Does Jonah say, “OK God, I’ll do your will?”  Not yet.  He just prays for himself, prays for deliverance.  After three days God orders the fish to spit Jonah out, and God tries again. “Arise! Go to Nineveh, that great city, and proclaim to it the message that I bid you. “  This time Jonah accepts God’s command, and goes to Nineveh.  But it’s clear that he is doing the mission reluctantly, against his will.  He has not repented for his obstinate refusal to obey God; he has just barely managed to acknowledge that God’s the boss and he really doesn’t have much choice.

He gets to Nineveh, proclaims his message as God commanded, and, lo and behold, the people of Nineveh, including the king, repent. They put on sackcloth, put ashes on their heads, vow to change their ways.  God accepts their repentance and the city is spared.  Jonah, dejected, sits outside and asks God to take his life.  Instead God teaches Jonah a message by first giving him a bush for shade, and then taking it away.  The book of Jonah finishes with Jonah still unrepentant, angry that Nineveh repented, angry that God accepted Nineveh’s repentance, angry that God took away a little shade (which God had provided in the first place).

Jonah does not exactly serve as a good model of repentance for us on Yom Kippur.  Instead of doing teshuvah, repenting, turning to God, Jonah seems to be the only person in the entire story who does NOT do teshuvah.  Everyone else – the non-Jewish sailors on the ship, the non-Jewish king of Assyria, the non-Jewish citizens of Nineveh – all do teshuvah.  The Jew, the prophet, who we would think should be the role model, is the one person in the story who is continuously rebelling against and fighting God, who never truly repents, even though he does at least condescend to obey God’s orders, when it is clear he has no choice.

So what’s the message of this story for us?  Why should we read it today, of all days?

The psychologist Erich Fromm provides an explanation for Jonah’s behavior.  Fromm says Jonah is hung up on justice.  About Jonah, Fromm says “He is a man with a strong sense of order and law, but without love.”  Jonah did NOT want mercy.  Jonah was completely lacking in compassion for people he saw as his enemy. What Jonah wanted was justice.

Unfortunately, Jonah’s attitude is typical of many people.  People who insist on justice, and only justice.   They want other people to get exactly what they deserve, not a bit more. They don’t want to be put out for someone else who may not deserve it.  And they find plenty of justification for that in religion; after all, the Torah says tzedek, tzedek tirdof,”Justice, justice, shalt thou pursue.”

But today, Yom Kippur, is not about justice. Rosh Hashanah, the holiday we celebrated a little over a week is the Day of Judgment.  Rosh Hashanah is the day when the Talmud says we all pass before God and are evaluated, written into the book of life or the book of death – or left hanging, suspended, to see if we can do enough teshuvah and good deeds to move us from the book of maybe to the book of life.

Today, Yom Kippur, is the Day of Atonement.  The judgment is done; whatever has been decreed has been decreed.  We either did a good job of teshuvah, or we didn’t.  All that is left for us is to throw ourselves on the mercy of the court.

And that is where we can take heart from the message of Jonah.  We should be grateful that God is not as judgmental as Jonah.  If we were subject to strict judgment, would any of us truly be able to bear the scrutiny?  Wouldn’t we all be judged lacking?  When we judge ourselves, aren’t we distressed by our failings and shortcomings?  Anyone who is honest with him or herself has no trouble seeing the many ways in which he or she has fallen short of ideal.

But ultimately, God is El rachum v’chanun, God the merciful and compassionate.  Having judged ourselves on Rosh Hashanah and the succeeding days and found ourselves wanting, we ask God to forgive us with our flaws and inadequacies.  And God does.  All we have to do is take the first step – to turn to God, to do teshuvah, to repent and feel regret over our shortcomings, and God welcomes us back, with love and mercy, just as He accepted the repentance of the people of Nineveh.

God does not want to destroy anyone, not even sinners.  The story is told in the Talmud that R. Meir, one of the greatest rabbis of his time, was being harassed by some bad people.  His wife, Beruriah, heard him praying for their destruction, and chastised him.  Beruriah scolded him, “do you think the verse says ‘sinners will be eliminated from the land?’  It does not.  It says ‘sin will be eliminated from the land.’” Catching his wife’s drift, R. Meir instead prayed that the bad men should repent, and not harass him, and thus it came to pass.

On this Yom Kippur, let us not pray for the destruction of anyone, not even the Iranians, or Hamas.  Let us instead pray that our enemies do teshuvah, that they repent of their evil plans, against us and others.

If we are not judgmental toward others, God won’t be judgmental toward us, and we will be able to finish Yom Kippur confident in God’s mercy, knowing that we have been forgiven, that we start a New Year with a “clean slate,” with a fresh start. May the New Year be one in which we all experience God’s love and mercy, 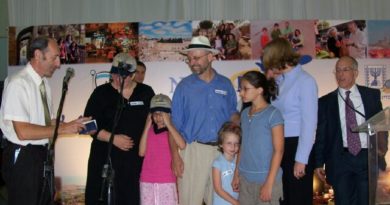 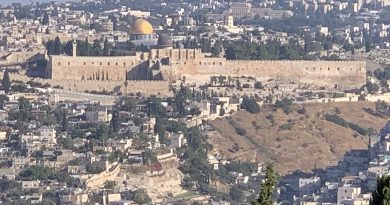 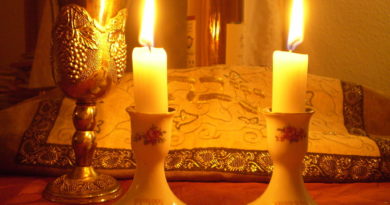