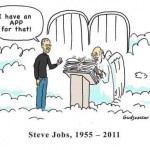 Steve Jobs, Bill Gates, and I were all born in 1955 (in fact Bill Gates and I were born on the exact same day).  All three of us dropped out of school (I beat them to the punch and dropped out of high school; they didn’t drop out until college!).  All three of us started companies at a relatively young age (Gates, 20; Jobs, 21; Leff 27).  Alas, that’s where the commonalities probably end.  Two of the three became billionaires; one’s dead, one’s retired and giving his money away.  The other one, yours truly, didn’t become a billionaire, didn’t even become a millionaire, at least not in dollars and not yet, and is still working for a living. But as I am also an entrepreneurial member of the “class of 1955,” I’ve always felt some affinity for Steve Jobs and Bill Gates.  So it was with sadness (and awareness of my own mortality) I noted Steve Jobs’ passing, and with some interest I read his biography by Walter Isaacson.

Jobs was a fascinating and complex character.  He revolutionized several industries – personal computers, animated movies, and music.  He had a huge impact on several other industries as well – cell phones and arguably journalism, as the iPad helped provide a way for newspapers to win subscribers who would pay to read newspapers online.  He would show up for meetings in blue jeans or shorts, sit cross legged and barefoot on people’s desks.  He was so obsessed with design he had a hard time buying furniture, and it took him two weeks and endless conversation to pick out a washing machine.  He was mean, abusive, mercurial.  When he was young he dropped acid, wandered around India, and took up Zen meditation (which does not seem to have helped mellow him much).  He was also charming, charismatic, brilliant, had amazing intuition about products, and was quite eccentric.  He created, and then resurrected the world’s most successful electronic device company – Apple’s market value now substantially exceeds Microsoft’s.  And he did all that before dying at the age of 56. What lessons can we “mere mortals” learn from Steve Jobs’ all too brief life? Here are some of the features that I think helped him succeed:

It’s interesting to note that he also succeeded despite some negative personality traits:

He also had one tremendous strength that was also a major flaw, possibly a fatal flaw: his “reality distortion field.”  He wouldn’t take “no” for an answer.  He would pronounce some completely unrealistic schedule, or some completely unrealistic set of product features.  And yet, thanks to the force of his vision and his ability to get brilliant people to put out 110%, they would often accomplish “the impossible.”  The reality distortion field, however, worked against him in personal relationships, and it worked against him in his battle against cancer.  When he was first diagnosed, he didn’t like the idea of being opened up in surgery, so he tried to will it away.  His “reality distortion field” said he could get rid of the cancer by dieting, or acupuncture.  So he waited nine months before he got surgery, and that nine month wait may have cost him his life: the cancer, which would have been removable, had metastasized in the meanwhile.

Something happened to Jobs as he was nearing the end of his life that I have seen happen to other people in the context of my role of rabbi: he became more open to the idea of God.  He went from being more or less atheist, to being 50-50 on whether God existed.  As his end was nearing, he didn’t like the idea that he would completely cease to exist. Whatever happens to his soul, however, Steve Jobs certainly leaves behind a powerful legacy.

It’s also interesting to note that, as pointed out in an article in the New Yorker, Steve Jobs wasn’t so much an inventor as he was a tweaker.  He didn’t come up with new product categories out of the clear blue sky.  Generally other companies were there first.  He just applied his obsessive ideas about products being elegant and simple to use, and made such vast improvements in them, it was as if he created a completely new product category.  Personal computers, cell phones, tablet computers, digital music, animated films all existed before Steve Jobs put his hand to them.  But none of them were the same after he did!