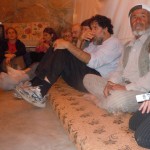 Why were Sodom and Gomorrah destroyed  (as we read in this week’s Torah reading)?  The Torah calls them wicked and sinners, but other than wanting to have their way with Lot’s visitors, the Torah doesn’t tell us much else.  The rabbis offer several different explanations, including, corruption and thievery.  But in some ways one of the worst things they supposedly did was a collection of behaviors known as “midot S’dom,” or the “traits of Sodom.”  In essence, they were gratuitously mean to people. Even when it would cause them no harm, they would not allow someone else to benefit from something that belonged to them.

I was thinking about “midot S’dom” yesterday as I went on a tour with Rabbis for Human Rights around the South Hebron Hills, where our legal department does most of its work.

First, we visited a very small scale solar power plant in the Palestinian village of Manzel.  These solar panels provide electricity to a school, they provide a light bulb to each home so they 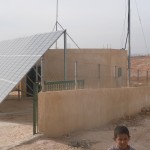 can have some light and night, and power for refrigerators to keep the goat cheese they make to support themselves cool and fresh.  The Israeli Civil Administration has ordered that this plant, built with funding from the Spanish government, be destroyed because it was built without building permits.  It is, of course, virtually impossible for a Palestinian village to get building permits in Area C.  The plant isn’t hurting anyone: it’s even green technology!  It surely seems midot S’dom to remove this small source of light.  Click here for more on RHR’s work on this.

I was also thinking about “midot S’dom” when we visited Bir El Id, a small community of “cave dwellers” living in the South Hebron Hills.  Some of the cave dwellers live in the S. Hebron Hills live in real caves; others, like the people we visited, Yusuf (who has four wives and 33 children!) live in sort of half cave/half tents, places carved into the side of the hill with canvas shelter.  They were chased away by settlers in 2000, and after a lengthy court battle which RHR took the Israeli Supreme Court, they were granted permission to return, only to face further harassment, such as not being allowed to use the only road to the area, and demolition orders for their, believe me, very modest, homes.  They are not hurting anyone; they’ve lived like this for many generations, and have legal title to the land.  Isn’t “midot S’dom,” gratuitous meanness, to keep harassing them.  The settlers hope that with enough harassment, they will leave, and it will become possible for them to take over the land.  Which is worse than gratuitous meanness, it’s theft.

Naturally, in my role as chairman of Rabbis for Human Rights I’ve been aware of our work in the South Hebron Hills, but seeing it first hand makes me very proud of the fine work our legal team is doing, helping people to live their lives.  The reason the legal team is successful is because, sadly, the actions of the IDF and the settlers are against Israeli law.  Yet they have no compunction about breaking the law unless someone stands up to them in court, and for cave dweller in the hills, it’s pretty much impossible to fight a battle to the Supreme Court without help.

It was a very frustrating day.  On the one hand, I was embarrassed by the “midot S’dom,” the gratuitous meanness, exhibited by my fellow Israeli Jews.  These are not the values we learn from Torah.  At the same time, I was very proud of the work being done by another group of Israeli Jews, rabbis, who are fighting this blatant discrimination.  In this week’s Torah reading, we also have Abraham’s finest moment: arguing with God to save the people of Sodom.  ”Could God possibly not act righteously?”  We’re continuing in a long tradition of fighting for the rights of other people.

Vayera 5774 — The truth, the whole truth, and nothing but the truth