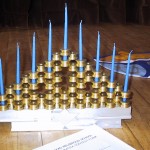 And Joseph called the name of the firstborn Manashe; For God, said he, has made me forget all my toil, and all my father’s house. And the name of the second he called Ephraim; For God has caused me to be fruitful in the land of my affliction. …Genesis chapter 41:51-52

Is it such a bad thing for “Abba” to become “Daddy?”

The Israeli Department of Immigration recently faced an uproar of criticism for a campaign to try to get Israelis living in America to move back to Israel. The campaign featured billboards and videos warning against the dangers of assimilation – punch lines (in Hebrew) included הגיע הזמן לחזור לארץDADDYלפני שאבא יהפוך ל “Before ‘Abba’ becomes ‘Daddy,’ it’s time to return to Israel.” One aimed at the grandparents back in Israel said “Help them return to Israel — before Chanukah becomes Christmas.”

Many American Jews were insulted – the ads implied that you can’t live a full Jewish life outside of Israel.

Of course that’s wrong, and it’s always been wrong.

Two of the Jewish tradition’s most important heroes – Moses and Joseph – came from assimilated backgrounds.

In this week’s Torah portion, Miketz, Joseph is living in Egypt. He has a comfortable life, like many American Jews. He rises to a position of power, equivalent to “vice president,” the same position that another Jew, Joseph Lieberman, was pursuing in America.

Joseph – in Egypt given the name “Tzafnat Paneach” – is so comfortable with his assimilation that he names his first born son in honor of forgetting the past. Menashe is based on nasha, which means to forget, forsake, neglect, or abandon. Joseph has left his past behind. His second son’s name, Ephraim, from the word pri, to be fruitful, honors his lot in life by saying things have turned out well despite a difficult start.

And things turned out well BECAUSE he had successfully assimilated into Egyptian society.

There are many people in Israel even more extreme than the Ministry of Immigration. People who believe it’s not enough to live in Israel, who believe you have to further isolate yourself in a community of people just like yourself, isolated from any “foreign” influences if you want to stay true to your Jewish heritage. See for example the Ashkenazi charedim who don’t want their daughters studying with those lax Sephardi charedim.

But there is a much better approach, one formulated by the Zionist philosopher Ahad haAm – which is to see Jews in Israel and Jews in the Diaspora as each having something to contribute to the other, nourishing each other, supporting each other, enriching each other.

Maimonides is one of the greatest Jewish thinkers of all time. Yet many of his ideas about God, now considered normative Judaism, were strongly influenced by Greek philosophy – which he learned in Arabic.

Cultural influences also go back and forth. Last week at the synagogue I attend here in Jerusalem, the prayer leader used the tune for Leonard Cohen’s “Hallelujah” for the Kedushah during the Amidah. We’re now in the midst of Hanukah; my kids are certainly glad that we adopted the custom of giving gifts at our winter holiday. A custom we brought with us to Israel, it’s really more an American Jewish custom. And in the spirit of Ahad Haam, we give back to the cultures of the countries where we live – Woody Allen and Jerry Seinfeld are as American as they are Jewish.

This week’s Torah reading shows us that Jews living in foreign lands play a vital role in the survival of the Jewish people. And it shows us that living outside Israel does not automatically mean giving up your Judaism. On Friday nights we traditionally bless sons by saying “y’simkha Elohim k’Efraim u’Menashe,” “May God make you like Ephraim and Menashe.” The sons of Joseph – assimilated Jews, who lived comfortable lives in Egypt – are our role models. For despite the attractions of Egypt, they remained Jews, and their descendants remained Jews.

My family and I have chosen to live our lives in Israel, which I do believe is the fullest possible expression of Judaism. But I also believe the implied criticism of Jewish life in America expressed in the Department of Immigration ads was off base. It’s better for Israel and the Diaspora to find ways to strengthen and complement each other. Especially during these days of Hanukah, the holiday that celebrates a rededication to Yiddishkeit, let us rededicate and strengthen the relationships between Jews all over the world.