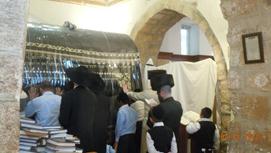 “A voice is heard in Ramah, lamentation and bitter weeping. Rachel is weeping for her children; she refuses to be comforted for her children, because they are no more.” …Jeremiah 31:14

Rachel’s Tomb is the third holiest site in Jerusalem, after the Western Wall and the Cave of the Patriarchs. I only live 4km (2.5 miles) from Rachel’s Tomb, yet until today I never visited.

When we first lived in Jerusalem, from 2000 – 2001, Rachel’s Tomb was the site of a great deal of violence. In May, 2001, while we were still living here, 50 Jews were caught in a firefight between the IDF and Palestinian Authority gunmen. I guess memories of those violent days have remained in my head. I’ve read that security has been improved, but somehow, it never seemed a place you just drove to and visited. It was, in my memory, a place haredi people visited in 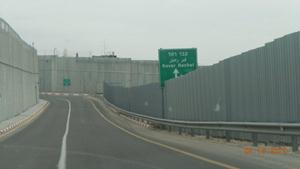 Well, it is possible to visit now, quite easy actually. It’s five minutes from my home, but it’s like going to a different world. A sad world. I believe Rachel really is weeping for her children. Weeping that her tomb has become a fortress. Weeping that her children can’t get along with their cousins, the Ishmaelites. Weeping at the security, at the 30 foot high walls that are needed to keep visitors safe.

You can drive to Rachel’s Tomb. There’s a parking lot right there, and there was plenty of room when I visited today, before the start of the 7th day of Passover holiday. It’s like a little 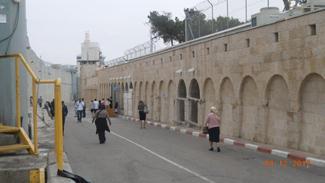 concrete reinforced finger sticking into Bethlehem. You pass through a gate just near the Bethlehem border crossing, and drive down a narrow road with high concrete walls on both sides.

It’s a long, low building that has been recently renovated. Would be a very nice site if it weren’t for the concrete, barbed wire, and soldiers. Sigh. 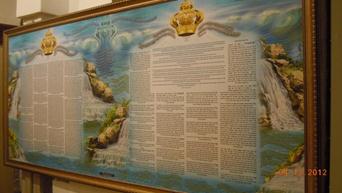 As is usual at tombs of tzadikim, there are separate sections for men and women. As you walk to the men’s section, there is a poster that has a teaching from Rebbe Nachman of Breslov’s Likutey Moharan (II:67). It’s a section dealing with the destruction of the Temple, righteous people, etc. I believe it mentions Rachel, but I haven’t had 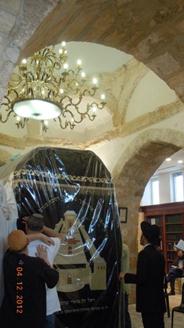 time to study it yet.

I went inside, and I prayed. I prayed for the health of friends and family members. I said the afternoon prayers with a minyan.

Mostly I prayed for peace. I prayed that the concrete walls, barbed wire, and soldiers would no longer be necessary.

Of course, the chances are pretty high that the tomb actually contains someone other than Rachel, who lived about 3,500 years ago. The first mention of this particular location as Rachel’s Tomb is in the beginning of the 4th century, which, even though it’s a long time ago, is still 2,000 years after Rachel died. But whether or not Rachel’s bones are in there, the site is a holy place, and has been for at least 1,600 years. And it’s holy not only for Jews: it’s also holy for Christians and Muslims. It has, in fact, been at the 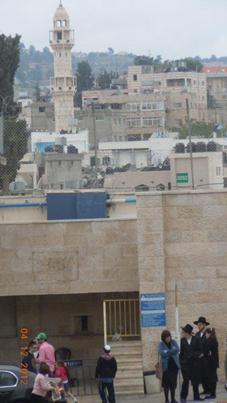 center of some controversy in recent years, as Israeli Prime Minister Benjamin Netanyahu declared the site a “Jewish Heritage Site,” despite the fact that it’s technically in Palestinian-controlled Bethlehem. UNESCO responded with a resolution that declared that the site is holy to both Muslims and Jews; Muslims know it as the Bilal bin Rabah mosque.

It would be nice if in addition the Orthodox Jewish synagogue that’s present at the tomb, there were space for Christians and Muslims as well. Mother Rachel is important in their traditions as well.

Wikipedia has a very detailed article on Rachel’s Tomb.

Rachel is weeping for her children. Wouldn’t it be nice if we did something to comfort her?