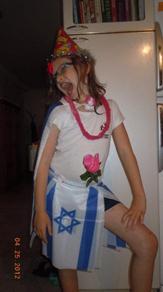 Israel has a lot to proud of. We are the cradle of monotheism, the place where the religious beliefs of half the people in the world got their start. We have a rock solid economy, relatively low unemployment, a much better social safety net than America, the most dynamic high-tech community in the world outside of Silicon Valley. We keep inventing cool new stuff that works its way into everything from smart phones to pills you swallow that broadcast pictures of your insides as they pass through you. We are truly an “in-gathering of the exiles” with about half of the world’s Jews living in this one small country – which is probably a higher percentage of the world’s Jews that have lived here since the FIRST temple days. And those Jews come in all colors and ethnicities from the white Europeans of Poland and Russia to the Arabs of Iraq and Morocco to the blacks of Ethiopia, with een a few random Americans thrown in!

We have a robust press which freely criticizes the government. During the last 64 years we have gone from being a backwards country relying on handouts from overseas to get by to being the only true democracy in the Middle East. Well, the only true democracy if you live within the pre-67 borders, and we’re missing a few things like freedom of religion.

I’m really confused about how I should feel today. Israel really, truly, is an amazing country. I love living here. I love the history, I love being part of history in the making, I love living in the only country in the world where I’m part of the majority culture. I love the food, I love the amazing people I meet.

Yet I also can’t help but be very conscious of all the ways in which this country is screwed up. Which kind of makes me feel like Scrooge or something. And anyone who knows me knows that I’m really generally a pretty cheerful optimistic person. But…

The day before Independence Day is Yom HaZikaron, Memorial Day, the day when we remember the 22,993 Israeli soldiers who have died defending Israel. At last night’s ceremony in the Jerusalem neighborhood of Baka several of the people giving speeches talked about how on this one day we are all unified…well, only if you don’t count the haredi (ultra-Orthdox) and Arabs, about 30% of the population. So I guess what they mean is all the “normal Jews,” religious or not, are united, which is true.

We made aliyah almost five years ago. What breaks my heart as we celebrate Israel’s 64th birthday is that as a country we don’t seem to have made much progress. Peace is as elusive as ever, if anything the prospects for peace seem more remote now than they did five years ago. The government keeps trying to pass very anti-democratic bills. Racism seems even more prevalent than it was, with rabbis feeling free to say things like it is forbidden to rent apartments to Arabs. The ultra-Orthodox monopoly on religion, which prevents me and any other Conservative rabbi from being able to function as a rabbi (we can’t officiate at legally recognized weddings in Israel) is a strong as ever.

I really HATE this conflicted feeling I have. I really want to be able to just feel whole-heartedly patriotic. Like I did on the Fourth of July in America. Oh well. Maybe next year. “Even though he may tarry I believe wholeheartedly in the coming of the Messiah…”

Maybe the barbecue will help me get over my attitude! J