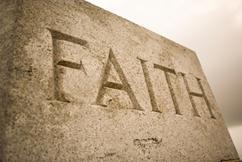 If you ask people what one word comes to mind if you say Passover, most Jews will respond with “freedom.” Chag Haherut, “Festival of Freedom,” is one of Passover’s four names. And, of course, we have the endless jokes about “Let my people go,” God’s order to Pharaoh, conveyed by Moses, which takes on additional poignancy after a week of eating matza. Passover, the holiday when we celebrate being freed from slavery in Egypt, starting our journey to the promised land.

But faith – and optimism – are as much a part of the message of Passover as freedom. The Talmud tells us “Our ancestors merited redemption from Egypt because of faith, and it is due to the merit of faith that they will be redeemed in the future.” There is a tradition which says that when the Israelites were in Egypt, they had descended to the 49th gate or level of impurity. If they had lost the 50th, the last level, they would not have been redeemed. And that last level, the last, 50th gate of impurity, is losing faith.

The Torah commands us, “﻿And you shall tell your son in that day, saying, This is done because of that which the Lord did to me when I came forth out of Egypt.” One of the 613 commandments is to tell our children the story of going out from Egypt. Why that particular story?

The story is the foundation of faith for the Jewish people. No matter how dark the times are – they don’t get much darker than they were in Egypt – there is still hope. God will remember us and save us, redeem us.

That optimistic faith and hope based on historical memory has served the Jewish people well through many difficult and dark hours. Having faith, even in the darkest days of the Crusades, pogroms, and the Holocaust, has allowed Jews to survive as a people, and has also allowed many individuals to survive spiritually and psychologically in the face of great hardship. If that last, fiftieth gate is gone – if faith that God will remember us, and things will get better is gone – the game is over. Without faith, we stop trying, we give up, we accept whatever horrible things have befallen us. If that had happened in Egypt, we would have remained stuck in Egypt. We would not have bothered putting the blood of the Egyptian’s god, the ram, on our doorposts. We would have been finished, our first born killed with the Egyptians’.

This is an important message for “liberal Zionists” to take to heart. This is a difficult time to be a liberal Zionist. It feels like all the things we believe in – a Jewish and democratic Israel, living at peace with our neighbors, a beacon of Western democracy informed by Torah values, a thriving country where we accept each other with all of our differences – is threatened from every side. There are outside threats such as Iran, and an Arab spring that may bring governments that are hostile to Israel. There is internal conflict, with racism and lack of tolerance for others, evidenced by evils such as rabbis saying it is against Jewish law to rent an apartment to an Arab. The religious – secular rift seems to be growing each day as some elements of the haredi population do things like spit and curse at women who won’t ride in the back of the bus. And there is the stalled peace process, going nowhere, as we continue to militarily rule over the Palestinians in the West Bank, acting like Pharaoh with arbitrary and harsh treatment of the locals. Our government seems incapable or unwilling to step up to these challenges, preferring to divert the attention of the masses by beating the drums of war against Iran. The Israeli left, the “peace camp,” is weak and in disarray.

It would be easy to despair, to give up hope. But the message of Passover is “have faith.” Don’t give up, no matter how dark the picture. God will support us; better days are ahead.

Judaism sees time as a helix; a circle going around, but also going up. Different times of year are associated with different kinds of events and energy. We are taught that just as we were redeemed in the past at Passover, we will be redeemed in the future at Passover.

May this Passover be a time of national and personal renewal. May we all keep the faith, and redouble our efforts to work for a better Israel and a better world, a world that will live up to the vision of the prophets, a world at peace. Here in Jerusalem, at the end of the seder we don’t just say “next year in Jerusalem.” We say “L’shana ha’ba’ah birushalayim habenuyah,” next year in Jerusalem rebuilt, Jerusalem at peace, Jerusalem perfected. May it be so!

Shabbat HaGadol 5771 — the how’s and why’s of Passover