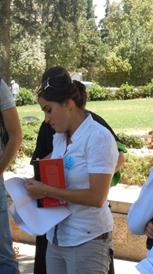 Over breakfast one morning the spousal unit said “Here’s something that might interest you – a walking tour with Sayed Kashua.” We both enjoy reading the Israeli-Arab’s columns in Haaretz every weekend (in English translation from the original Hebrew), and she knows I’ve read one of his books (in the original Hebrew). “Great idea.” I figured maybe our 16 year old daughter would like to come. She said sure. I sent a link to the Wikipedia entry for Sayed Kashua so she’d know who it was we were going to follow around Jerusalem. I watched an episode of the TV series he created, “Avodah Aravit,” Arab Labor, to get in the mood. Here’s the description of the tour from the Jerusalem Writer’s Festival website:

A tour along the seam of Jerusalem neighborhoods – invisible but constantly present, in the path of Sayed Kashua’s columns and stories. We will look at the nooks and crannies of the city from a fresh perspective; contemporary and complex, through Kashua’s penetrating stare and his characteristic and quiet cynicism.

We arrived at the appointed time and place for the start of the tour – in front of the Jerusalem YMCA. There was a young lady with a clipboard standing amidst a group of about a dozen people. Must be our group. No sign of the famous author, but I figured the girl with the clipboard was some sort of assistant checking people in, etc., and the author would be there momentarily.

About two minutes later, a bunch of yelling broke out. One of the other people on the tour was waving the program guide around and yelling (in Hebrew) “what do you mean he’s not coming? It says “im Sayed Kashua,” “with Sayed Kashua.” She kept ranting in American accented Hebrew, as another guy with American accented Hebrew tried to shut her down by repeating over and over “hu lo po v’hu lo yagiah.” “He’s not here, and he’s not coming.” Shut up and deal, in other words. A couple of people told the complainer that it’s a two minute walk to the cashier, go over there and ask for a refund, but stop arguing already, the rest of us want to get going on the tour.

While all this was going on, it struck me that this could be a scene from one of Sayed Kashua’s columns, which are often filled with misunderstandings that come about as a result of incorrect expectations. Too bad he wasn’t tagging along behind to write about it! J

Showing that she must be more real Israeli than American import, within five minutes the woman who had been complaining so loudly was walking along next to the tour guide, Meirav, chatting away amiably. Go figure.

I was also more than a little disappointed. But since we were there, we decided to go along on the tour anyway. So we walked along with this young woman – better looking than Sayed Kashua, if you go by the pictures, but I admit to being biased in favor of girls – as she read excerpts from some of his books and columns as we strolled past the places mentioned. For example, we paused in Mamilla Mall as she read the following excerpt (in the original Hebrew) from one of his columns:

I hate the Mamilla Mall. I never go there, and walking through it toward the Old City has always rubbed me the wrong way. You have all these fancy-shmancy stores ruining the view of the Old City walls. When it comes to building preservation, Jerusalem must be one of the lamest cities in the world. Here they’re always searching for things under the earth and meanwhile, what’s above it is often trampled and hidden for the sake of more and more apartment buildings and stores. But I had no choice. For the sake of my wife’s birthday, I had to sacrifice a few values and go to the Mamilla Mall.

Maybe his publicist will pick up this blog piece on the Google alert he no doubt has for his client, he’ll forward it to the famous author himself, who’ll email me and invite me to meet him at that pub for a drink to make up for the grave disappointment we suffered from not having him lead our tour.

Otherwise I’ll have to catch him in LA or Amsterdam or somewhere, as he seems to spend more time outside Israel than in it these days. But who can blame him?

Thou shalt not murder