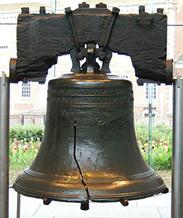 ﻿ “Proclaim liberty throughout all the land” …Leviticus 25:10

“Moreover of the children of the strangers that do sojourn among you, of them shall you buy, and of their families that are with you, which they fathered in your land; and they shall be your possession. And you shall take them as an inheritance for your children after you, to inherit them for a possession; they shall be your slaves for ever.” …Leviticus 25:45-46

Neither the Torah nor the founding fathers of America seemed particularly concerned with inherent contradiction in “proclaiming liberty throughout the land” while still condoning slavery. In the Torah “liberty” was really something for Jewish males above the age of majority. The famous verse from this week’s Torah portion, “Proclaim liberty throughout the land” is inscribed on the Liberty Bell in Philadelphia. In 18th century America, liberty was for white males over 21, and even then especially for landowners. Historically “liberty” all too often meant liberty for people who are the dominant group, and not for anyone else.

The world has become remarkably more diverse and pluralistic. Discrimination on the basis of race and gender has been banned throughout the civilized world. Even though the traditional Jewish marriage contract still uses the language of “kinyan,” acquiring a bride, no one, except perhaps a few extremists, still view marriage as the man acquiring the wife in the way he would acquire some other possession. In America, President Barack Obama just took a stand on the last civil rights battle in that country, the right of homosexuals to marry each other.

Our “moral intuition” nowadays tells us that slavery in any form is wrong. It doesn’t matter if the slave is a Jew or a Gentile, white or black, one human being cannot ever own another human being. We can find plenty of support for such a view in the Torah and the Jewish tradition.

The Jewish tradition forbids both tattoos and suicide for a similar foundational reason: your body is NOT yours to do what you want with. Your body belongs to God who created you. Tattoos would be permanently marring something that doesn’t belong to you; just as we used to joke when I was in the US Army that if you got a sunburn you could be subject to punishment for damaging government property. Suicide is forbidden for the same reason: it’s not your body and your life to do whatever you want with, it is God’s, so suicide is seen as the ultimate act of revolt against God. Just an aside: nowadays we understand that no one commits suicide with a clear and rational mind – suicide is the result of depression which is disease, so we are no longer prejudiced against people who committed suicide.

In any case, if your own body is not your own, al achat cama v’cama, all the more so, someone else’s body cannot belong to you.

Is it possible that our “moral intuition” should over rule the Torah? Isn’t the Torah eternal? How can we change what it says in the Torah?

The truth is that an evolving moral intuition has always informed the way we read the Torah. The rabbis of the Mishnaic era were troubled by the laws in the Torah regarding the ben sorer u’moreh, the stubborn and rebellious son, they were troubled by capital punishment, so they effectively legislated those things out of existence. The rabbis could have looked for ways to allow animal sacrifice at a place other than the Temple, as was the early Jewish practice. They never even tried.

It’s not new to have compassion for people who are slaves. In the Talmud Rabban Gamliel mourned for his slave Tabi as if he was a member of his family. When some of his students protested “we don’t mourn for slaves,” Rabban Gamliel’s response was “Tabi was a good man.”

A thousand years ago Rambam said “It is permitted to work an eved K’nani with rigor. Though such is the law, it is the quality of piety and the way of wisdom that a man be merciful and pursue justice and not make his yoke heavy upon his slave or distress him, but give him to eat and to drink of all foods and drinks.”

But more than simply being compassionate to slaves, it is in fact possible to change halacha as our moral awareness evolves. In his Guide to the Perplexed, Rambam explains it as follows. He describes how people go from being very soft, and being totally dependent, and being fed milk, to becoming stronger and more self-sufficient in a gradual process. He then says “Many precepts in our Law are the result of a similar course adopted by the same Supreme Being. It is, namely, impossible to go suddenly from one extreme to the other: it is therefore according to the nature of man impossible for him suddenly to discontinue everything to which he has been accustomed.”

Rabbi Jonathan Sacks, chief rabbi of Great Britain, applied this principle to the question of slavery. He looked at the laws for the treatment of the slave that are found in this week’s parsha and says “These laws do not abolish slavery, but they do create the conditions under which people will eventually learn to abolish it.”

Because most people do not own slaves, many people give no thought to the subject. We don’t have slaves, so what’s the problem?

Slavery is, unfortunately, still very much a problem. By some estimates there are more people living as slaves today than ever before in history: 27 million people worldwide.

Instead of rich people having household slaves – although some of that still exists, especially in India and the Gulf countries – slavery has a different form today. Young (and not so young) girls and boys are sold into the sex trade. Agricultural and other foreign workers are exploited and held in primitive conditions against their will, their passports taken away from them. Workers in some electronics plants in Asia toil in slave-like conditions.

Here in Israel yesterday’s newspapers reported on the 18 year sentence handed down to the ringleader of the largest sex slavery ring in the country’s history. He coerced hundreds of women from Russia, Ukraine, and other FSU nations to Israel with promises of jobs as waitresses and sold them to escort services after smuggling them into the country.

Our “moral intuition” would also tell us that it is clearly wrong to hire a prostitute who is working against her will, even if you believe it is OK to hire prostitutes in general. But how far does our moral responsibility go?

Is it OK to buy tomatoes that have been picked by someone who is kept as a virtual prisoner by his employer?

Is it OK to buy electronic devices that have been manufactured in factories where employees are forced to work 16 hour days in dangerous conditions?

There are no clear answers as to how far we are obligated to go in making sure the products we buy are not produced by slaves. But unless we speak up – as citizens and consumers – such exploitation will continue.

The Talmud teaches that “Jews are compassionate children of compassionate parents, and one who shows no pity for fellow creatures is assuredly not of the seed of Abraham, our father.” Our compassion – and our humanity – demand that we do not allow any human being to be sold to another.

I swear…but by what book?