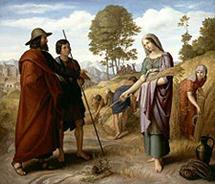 ﻿ And Ruth said, Do not entreat me to leave you, or to keep from following you; for wherever you go, I will go; and where you lodge, I will lodge; your people shall be my people, and your God my God; Where you die, will I die, and there will I be buried; the Lord do so to me, and more also, if even death parts me from you. …Ruth 1:16-17

Why do we make it so difficult to become Jewish?

Shavuot (aka “Pentecost”), which starts Saturday night, is the holiday when we celebrate receiving the Torah. The holiday is described in the Torah as a harvest festival, celebrated 7 weeks after Passover, when the new grain comes in. The later rabbis calculated that it was this same day that the Torah – in particular the Ten Commandments – were given to Moses on Mt. Sinai, on the 6th of the Hebrew month of Sivan in the year 2448 on the Jewish calendar (corresponds to 1313 BCE).

Since the essence of converting to Judaism is accepting the Torah as the instruction manual for your life, we read the book of Ruth on the holiday. Ruth is the most famous convert to Judaism. Well, other than Marilyn Monroe, Elizabeth Taylor, and Sammy Davis, Jr. But the story of her joining the Jewish people is considered the archetype for conversion. “Your people will be my people, your God, my God.” Just as Ruth accepted God and became Jewish, the Israelite nation as a whole accepted the Torah and God’s commandments on Shavuot, becoming, for the first time, Jewish as a religion, not just as a tribe.

Every religion has its own rules for how to convert. For some religions, it’s really simple. According to the law in India, anyone who calls himself Hindu gets counted as Hindu. To become Muslim all you have to do is sincerely recite the shahada, the essential declaration of Islamic faith: “There is no god but God, Muhammad is the messenger of God.” At the other extreme are religions that do not accept converts at all, for example the Druze. The Druze have not had someone publicly acknowledged as a convert in over 1,000 years.

Judaism and Christianity both fall somewhere in the middle, typically expecting a person to study and go through some sort of ritual. Not surprisingly, the Jewish and Christian conversion processes are very similar: study the religion, accept the basic requirements (accepting Jesus in Christianity and accepting the Torah and commandments in Judaism), and a ritual immersion. Judaism adds circumcision for men.

Unlike Christianity where proselytizing is part of their mission, Jews don’t proselytize. We do not have any equivalent of Jehovah’s Witnesses or Mormon missionaries knocking on doors asking people whether they’ve heard the good news of Moses.

Nowadays, it generally takes a year of fairly serious study to become Jewish. After that year of study, the prospective convert has to appear before a beit din, a religious court, where he or she is examined for both knowledge and sincerity. Orthodox and many Conservative rabbis require that the convert agree to follow the commandments, living a religious life. Men have to undergo ritual circumcision or the ritual drawing of a drop of blood for men already circumcised; both men and women immerse in a mikveh, a ritual bath (it’s where the idea of baptism comes from).

The good thing about this rigorous procedure is that the people who go through it are definitely knowledgeable, committed Jews at the end of it. In the average Conservative or Reform congregation, converts are much more knowledgeable about Judaism than most people born Jewish. Many people born Jewish don’t do any serious study of the religion after bar/bat mitzvah at the age of 13. Converts study as adults, and they study with the enthusiasm of someone interested in the subject, not as kids forced by their parents to go to Hebrew school. As a result, converts are often found in leadership positions in synagogues, because they take it seriously. One of my former conversion students is currently studying to become a rabbi.

But do we need to make it so difficult?

It wasn’t always so difficult to become Jewish. Going by what’s written in the Torah, in the earliest days, marrying a Jew and becoming part of the extended family seems to be all that was required. Ruth made her famous declaration, and that’s enough for her to be considered Jewish. And Jewish enough to be the ancestor of Israel’s most illustrious king, King David.

2,000 years ago it would appear that Judaism had a much more welcoming attitude toward proselytes: there are estimates that as much as 10% of the Roman Empire was Jewish. Even 1,000 years ago, the process as described by Rambam (Maimonides) is one that you could complete in a day. Instruct the prospective convert on some of the major and minor mitzvot, their reward and punishment, and then do the rituals, and that’s it. In fact Rambam discourages going on at too great a length about all the commandments and punishments, “lest we cause him anxiety and thereby turn him from the good path to the bad path.”

For much of the last 1,000 years Jews were forbidden to seek out converts. We were persecuted. In fact, it became a standard part of the process for the beit din to tell the convert “don’t you know we are a persecuted people? Sure you want to do this?”

The Orthodox establishment, especially here in Israel, has followed in that anti-proselytizing mode and has made it incredibly difficult for people to convert. They keep adding more and more rules. It’s not enough, as it was for Rambam, to simply accept the concept of being obligated to follow the commandments, and learn as you go along. They require people to show that they fully follow the most minute of the commandments as proof of sincerity. This was never required historically. Not only that, the Orthodox authorities here in Israel will retroactively annul conversions if it appears the person later is not observant, or if they find something they don’t like about who was on the beit din. Which is also contrary to traditional Jewish law; as Rambam said, as long as the ritual procedures were properly followed, the person is Jewish, and it doesn’t matter if there were concerns with the beit din or other issues at the time of the conversion.

It’s a big problem here in Israel. We have about 300,000 people of Russian descent living here who are not “technically” Jewish, even though they live here, speak Hebrew, younger generation was born here, serve in the IDF etc. They feel Jewish. They want to be accepted as Jewish. They want to be as Jewish as their friends – observing the holidays, etc. – but not necessarily following all the minutiae of halacha as defined by ultra-Orthodox rabbis.

Right now, they are stuck. Nowhere to go. And with the state-sanctioned chief rabbinate stranglehold on marriage in Israel, they can’t even get married, except to someone else with the same status. As Israeli politician, Rabbi and member of the Knesset Haim Amsalem, proposes to make it easier for these people to convert. Click here for more information on his proposal.

There’s a reason there are 2 billion Christians and 1 billion Muslims in the world, versus 13 million Jews. There will always be people leaving the religion as they assimilate into cultures around them. Unless we bring more people “in the front door” than we lose “out the back door” we will always have a demographic problem.

I’m not saying we need to imitate the Jehovah’s Witnesses or the Mormons and have hordes of young people going out knocking on doors drumming up business (but then again… ?). But we certainly don’t need to make it as difficult as we do.

Unfortunately, in some circles, converts to Judaism face prejudice from people who were born Jewish. See my paper “May a convert use a name other than “Ploni Ben/Bat Avraham Avinu.” That is also totally inappropriate; after all, the holiday of Shavuot – when we accept the Torah – comes to remind us that we are ALL “Jews by choice” in a modern world where we no longer have to live in the ghetto.

Shavuot 5766 — The Power of Being Commanded

The Season of the Giving of the Torah