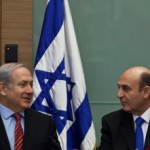 For the last several days, the talk in Israel was about early elections — supposedly planned for September 4.  Some pundits saw the timing as an indicator Israel was going to bomb Iran between September and November (when the US elections could make Obama a much stronger power to deal with).

And then — early this morning, at 1:30am — Israeli Prime Minister Netanyahu and opposition leader, retired general Shaul Mofaz of Kadima dropped a bomb of their own.  Guess what?  No early elections.  Instead we’ll have a “unity government” with 96 out of 120 seats in the Knesset in the government.

For those interested in more details, Haaretz and the NY Times both have good coverage.

Not surprisingly those left out of the new unity government — Labor, Meretz, and Knesset “wannabe” Yair Lapid — are screaming bloody murder about what a travesty this is, how evil and self-serving those conspirators are, etc.

So unlike a lot of my “lefty” friends, I’m going to go out on a limb — and be an optimist.  This could actually be good news for those of us who care about things like a more democratic Israel and peace with the Palestinians.

If early elections were to happen in September, the likeliest result would be that Likud would come out on top, Kadima would join the government, and we’d end up with a similar constellation anyway — except that Kadima would be a lot weaker. They will no doubt shrink greatly from their current 28 seats in the Knesset.

Kadima joining the government now means that Netanyahu has an incredibly solid government.  He no longer has to pander to the extreme right, either inside or outside his party.  It’s one of the reasons why not only did the left protest the unity government, but Danny Danon, representing the right flank of Likud protested, saying that “Likud voters have been betrayed.”

Netanyahu no longer has to worry about the far right causing a coalition crisis over evacuating settlements, or passing a law that will force more haredi citizens to serve in the IDF.

Part of the deal is that they will make changes in the election law — no doubt making it tougher for small fringe parties — and that Mofaz is going to be in charge of reviving the peace process with the Palestinians.  Both of those things are good news.

I believe Mofaz DOES want to push peace forward.  And I think Netanyahu wouldn’t mind having peace with the Palestinians, he just didn’t want his government to collapse over the issue.  So we might see some good things come out of this.

We can always hope, can’t we??

It is I, your brother Mohamed…

The Truth About Settlements