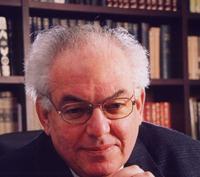 The Jewish world has lost a prophet. And we don’t have enough prophets these days, so the loss is keenly felt.

Many people speak with a “prophetic voice,” but for me Rabbi Professor David Hartman was a mamash prophet. Brilliant, inspired, passionate, pushing us to do better, pushing Israel to do better.

He died on February 10, 2013. Haaretz ran a very nice obituary of him which you can read here. It does a very good job of describing his brilliant career.

His son Donniel gave a beautiful eulogy that shows Rabbi Professor David Hartman on a personal level – as Abba.

I had the honor, along with many of my colleagues, to study with Rabbi Hartman at the Rabbinic Training Institute the Hartman Institute conducts every summer. My wife calls it “rabbi camp.” Pretty much every year when I was working as a pulpit rabbi in North America I made the pilgrimage to the Hartman Institute in Jerusalem to join with colleagues from every stream of Judaism to sit and learn and recharge my spiritual batteries. Since making aliyah in 2007 I’ve still attended when I can, but now my summer travel is in the opposite direction, back to the US, so it hasn’t been every year.

Rabbi Hartman was the rare combination of brilliant and passionate. He could certainly hold his own as a scholar, and his knowledge of his two main “rebbes” – Maimonides and Rabbi Joseph Soloveitchik – was encyclopedic. But unlike most scholars who can get lost in the ivory tower, connected to the world of ideas, not the world of feelings, thought, not people – Rabbi Hartman saw what was wrong in Israel and in the Jewish world and battled to correct those wrongs. To make the world a better place. To help Judaism find the right balance between fidelity to the God of our ancestors – and our ancestors’ way of worshipping Him – and the changes the modern world has wrought.

His best known book is “A Living Covenant: The Innovative Spirit in Traditional Judaism.” In A Living Covenant Rabbi Hartman puts forward the idea that instead of looking at the covenant between God and Man as a parental type of covenant, it should be envisioned as a marital covenant – which clearly implies a very different kind of relationship. One in which “obedience” is somewhat more thoughtful – and in which obedience comes from love, not from fear (well, ideally, anyway!).

But personally I was much more impacted by his final book: “The God Who Hates Lies: Confronting & Rethinking Jewish Tradition.” I wrote a review of the book, which you can read here.

“Is the woman we see walking the streets today the woman of the Talmud? No authority in the world can convince me that she is; no past authority can make it into a reality.”

Up against the “God of rabbinic infallibility,” Hartman puts “the God who hates lies.” He cites as examples prophets who changed the wording of prayers because they couldn’t honestly say the words – and they could not “ascribe false things to God.” The Talmud validates their feelings: God does not want lies.

So then this creates the conflict: “The God who loves permanence wants us to deny what we experience, while the God who hates lies wants us to give it credence, to incorporate it into our spiritual and ritual lives. Which God will we allow to guide our halakhic development—the God of Rabbinic infallibility, or the God who demands that I be truthful?”

Rabbi Hartman put the God who hates lies above the God of rabbinic infallibility, and he challenged the Orthodox world in particular to do the same.

But books are books, and Rabbi Hartman was really a phenomenon best observed in person. Articulate, passionate, entertaining, and sometimes speaking three languages more or less simultaneously – English, Hebrew, and Yiddish – he was both fun and inspiring to listen to.

I suppose the important things about a teacher are the teachings you remember later – REALLY remember, the stuff you don’t need to go look up in your notes. The teaching of his I most remember – that most informs my world view in some ways – is pretty simple. He said “The Messiah is not so much a prediction for the future, as it is a critique of the present.” We need the concept of the Messiah as the gold standard – the kind of world that we are struggling to create. To give us a goal. A direction.

Rabbi Hartman helped us see that goal. Helped us define how to live in the real world and still be “a good Jew.” Pushed us to live up to the ideals of the God who hates lies. Pushed us to create a tolerant, pluralistic society. His prophetic vision and passion will be deeply missed in this divided country. May his memory be a blessing. 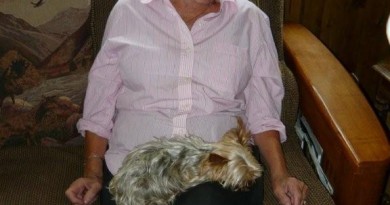 Dick Laine, z”l (may his memory be a blessing)