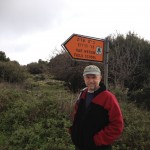 February 28 and March 1, 2013.  I’ll let the 20-year-olds hike the Israel Trail with a backpack, sleeping outdoors and pooping in the woods.  I prefer to jog the trail with a daypack and stay in a spa! These two segments started at SPNI’s Meron Field School and finished near the junction of 85 and 65.  On my next outing I should make it to the Sea of Galilee. Total accumulated mileage on the trail thus far is about 60 miles, roughly 10% of the total distance.

I stayed at The Villa Galilee near Safed.  Villa Galilee was OK; a little disappointing in some ways.  Clearly the owners spent a lot of money fixing it up, but then they got a lot of little details wrong so that it didn’t feel like it was a “first class” place.  Carmel Forest Spa has nothing to worry about from these guys in terms of luxury spas in Israel.

My wife and driver dropped me off at the Meron Field School at about 8:15am.  Segment 5 was the shortest hike I’ve done on the Israel Trail so far, both in terms of time and distance.  Was only a bit over 7 miles, 2 1/2 hours.  There are some nice views from the top of Mt. Meron.  At an elevation of 3,963 feet above sea level, Mt. Meron is the highest point in Israel (not including the Golan Heights).  One of the overlooks had a plaque with a poem by Leah Goldberg that I liked (translation mine):

“There are many beautiful things in the world; trees, and flowers, and people, and views; and someone who has open eyes can see at least 100 wondrous things every day.”

After finishing the run/hike at about 1030, Lauri picked me up at the finish, and I had brunch at Gan Eden (the Garden of Eden), which was good — nice view, typical Israeli breakfast, but done well.  Did some work for a few hours and had a deep tissue massage, which was quite good.  We had dinner at the restaurant at the hotel, which was also quite good.  The proprietors are clearly French, and dinner reflected the French attention to food.

Monday I was back on the trail at about 8am.  Lesson learned from segment 6: downhill does not necessarily mean faster or easier on the Israel Trail.  I THOUGHT it would be another quick trip, because it was only about 8 miles and all downhill.  The terrain was much more rugged than segment 5, however, so it was not at all fast.  It was a beautiful hike though — very scenic.  I’d say of the six segments I’ve done so far, my favorites were segment 2 from Tel Hai to Yiftah and this one. Very green, next to a stream most of the way, nice variety of scenery and flora.  Spotted a gazelle…which was a little far away by the time I got my phone/camera out.  The dip in the pool in the stream (see pictures) was way fun, even if it was freezing cold water.

At the start of segment 5

Mt Meron…the hike took me to the top.

Many memorials along the trail…this one at viewpoint Mt Neriyah, in memory of Yosef…

Another memorial, Lebanon Viewpoint, in memory of Uriel Peretz, fell in battle in Leb…

at the top of Mt Meron

There’s an Army base at the top of Mt Meron

Not sure where these people live that they have to come to a pond to collect water.

Another memorial, 21 year old Salach Kasam Tapash(?), from the name and location I’d …

My ride was waiting for me. The end of segment 5 / start 6 is just below Rashbi’s to…

Stayed at the Villa Galilee near Safed. The private outdoor jacuzzi was great! Resta…

View of the Sea of Galilee from our room

View of Mt Meron from the room

Yes, I had to bend over quite a bit to follow the trail under the road.

The trail went right up the stream. I went around it.

Note "prehistoric" erased! No doubt by someone who believes the world is 5…

Went for a dip in this natural mikvah…freezing cold, but great fun! And it was ere…

That’s a dead cow. No indication of what it died from.

That’s a gazelle zipping across the field.

Competing speeches at the UN: Abbas and Netanyahu, September 23, 2011