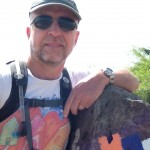 On these two segments I started at the Swiss Forest overlooking the Kinneret (Sea of Galilee), came down to Kibbutz Kinneret, made a detour through Kibbutz Deganya Bet to stop at the Galita Chocolate Shop, climbed back up to Yavna’el, where I spent the night.  From Yavna’el picked up the trail again and finished at Kfar Tavor, near the base of Mount Tabor, which will be the next run/hike.  Overall, I would not say these two were on my short list of “favorite segments.”  Day 8 was interesting because I saw stuff around the Sea of Galilee I hadn’t seen before; Day 9 had some nice views, but was very exposed.

I’ve now completed 165 km (103 miles) on the trail. Roughly 1/6 of the way, in a little over two months. My general plan is to reach Mt Carmel before I go to the US and UK in June.  When I get back I’ll do the stretch along the Mediterranean coast during the summer, and perhaps I’ll be able to do the desert stretch through the Negev next winter.

The actual routes I hiked can be seen on Wikiloc: Day 8 here and Day 9 here.  See below for pictures.

I’ve found that it does work best to stay in the place that’s near the end of one segment and start of the next. Simplifies the logistics a little.

With Shabbat not going out until 730pm now, I tried just going up early Sunday morning instead of leaving the night before.  The only problem is I never manage to actually get out the door as early as I would like to get out the door, so it was somewhat late (after 10am) by the time I got on the trail, which means it was hotter.  And I finished later, so didn’t manage to get any work done in the afternoon, which is my usual idea.

I drove straight to the start of Segment 9 and just parked my car at the trailhead.  Some nice views coming down the hill toward the Sea of Galilee (Kinneret).  First thing to see was Kibbutz Kinneret, one of the earliest kibbutzim in Israel, founded as a village in 1908, became a kibbutz in 1913.  Just past the Kibbutz there was a garden honoring Rachel the Poetess.  Next stop was Yardenit (the Jordan River baptism site), which was quite scenic.  It’s a very nice park-like setting. From there I made a detour off the trail to Degania Bet, adjacent to Degania Alef, which is the oldest kibbutz in Israel, founded in 1909.   The purpose for the detour was a stop at the Galita Chocolate Farm.  They make an awesome “Iced Chocolate,” a chocolate drink that has the texture of an blended iced coffee (“frapuccino” for Starbucks fans) but made with dark chocolate.  Yum!

I don’t recommend any hikers follow my route from Galita back to the Israel Trail — I ended up relying on my GPS and going “cross country,” but climbed a steep hill loaded with stickers.  Wasn’t pleasant.  Crossed back across the Jordan River next to a spot where there was treated sewage being dumped into the river.  From there the trail climbed back up towards Yavna’el, where I came across something that seemed a little strange: a big oak tree with an sign in front of that had an IDF insignia that said “עץ הגולני” “The Golani Tree.”  I figured it had to have something to do with the IDF’s famous Golani Brigade.  It does.  Click here for an interesting story about how they think this is the original tree that gave the unit its name.  From Yavna’el I started hitching, but ended up taking a cab back to my car.  Only 50 shekels, not bad.

Stayed at a B&B called “Duvdevan haGalil” which I would not particularly recommend.  Off-season mid-week I got a good deal…but the lock to the door of the room didn’t work and they didn’t have any wifi.  Drove down the hill to use the wifi at the Cafe Aroma at the bottom end of the Kinneret.  Forgot that being Yom Hashoah the restaurants would be closed that evening, so dinner consisted of bread and humus back in my room.

Monday I started the run/hike right from Yavna’el.  About two miles to rejoin the Israel Trail, and from there a steep climb to the “Eilot Observation Point.”  All along this ridge are awesome views of the Sea of Galilee, Golan Heights, Jordan River Valley, etc.  Along the way there was spring where someone had built a very shallow pool — not quite deep enough for a mikvah, but still deep enough to get wet, which was very welcome.  The trail comes out to Highway 65 just south of Kfar Tavor, across from Mount Tabor, which will be on my next segment.  I walked another mile+ to the village, and after a longish wait managed to get a ride back to Yavna’el.  Had to walk yet another mile plus back to the car.  Altogether I ran/hiked about 25 miles over the two days.

At the start of Segment 9, on highway 7677 near the Swiss Forest below Poriyah Ilit, …

I stayed at the Duvdevan haGalil B&B in Yavnael.

It says "natural pool" but it didn’t look all that natural.

One of the early houses at Kibbutz Kinneret

This pond is just off the highway. Drove past it plenty of times without ever knowin…

Here lies buried the horse Buba. Must have been some horse to rate a monument!

The Motor House — for pumping water.

Another place on the Kinneret I never visited before this hike.

The Galita Chocolate Factory on Degania Bet was a "detour," but it’s well w…

That brown stuff is sewage flowing into the Jordan. Yuck!

Leaving the Sea of Galilee the hike was exposed with no shade.

At the end of Segment 9 in Yavna’el

These sheep were running down the road, chased by a guy on a horse

They say these flowers you see all the time this time of year are related to tulips, …

The "Golani Tree." Not sure why the Golani Brigade has a tree in the middl…

Must have been a nesting ground for these birds, saw plenty of them on one hill.

The Sea of Galilee in the foreground, the Golan Heights in the background

Looking toward Hamat Gadar at the border between Israel, Jordan, and Syria.

Nothing like a dip in a spring to recharge your batteries

Mount Tabor … next hike goes to the top.

At the end of Segment 10 near Kfar Tavor.